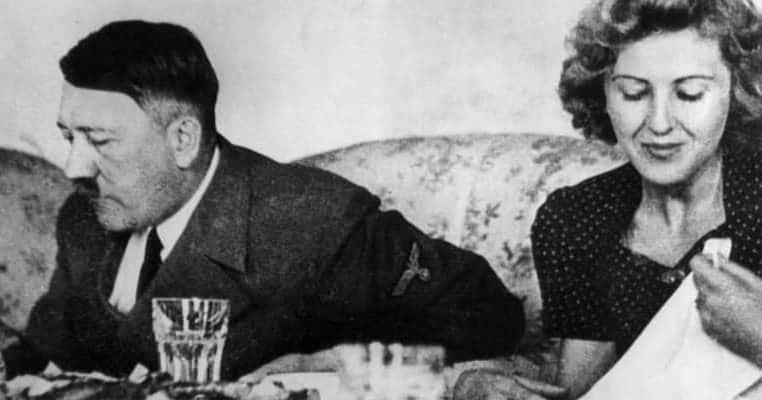 6. It wasn’t just alcohol that people turned to in order to numb the pain – drugs were some survivors’ crutch of choice as they faced almost certain death

Recent research has revealed how Nazi soldiers went into battle fueled not just by their belief in their Fuhrer’s warped philosophy. And nowhere was this more the case than in the Bunker, where secretaries and lowly aides were required to stay awake and alert almost constantly. As supplies of proper drugs fell as the Reich’s enemies encircled Berlin, those left in the Bunker took whatever they could get their hands on. One doctor who visited the Bunker to deliver supplies noted that it was like a scene out of hell with people lying everywhere, in a trance or knocked out.

Ironically, just about the only person who wasn’t on some kind of drug high during those 105 days in the Bunker was Hitler himself. For years he had been prescribed opiates by his personal physician, Dr Morell. In April 1945, he realized he had become addicted to them. He reputedly summoned his doctor and screamed: “You have been giving me opiates the whole time! Get out of the bunker and leave me alone!” Dr Morell did leave, taking his drugs with him. So it’s possible that, far from being high, the Fuhrer was actually suffering from withdrawal symptoms while underground.

5. Hitler came to see suicide as the only way out, and he wasn’t the only one to take his own life in the Berlin Bunker

It’s estimated that as many as 7,000 people killed themselves in Berlin alone in 1945. The figure could be much higher, however, as many suicides were simply not reported. One suicide report remains certain: Adolf Hitler himself. The Fuhrer famously shot himself in the Bunker, dying alongside his new wife, just hours after getting married. But Hitler wasn’t the only person to die in the Bunker. Even when the outcome of the war wasn’t certain, both Hitler and Goebbels made it clear to the German people that suicide was preferable to being captured. And lots of people heeded their advice.

Goebbels and his wife committed suicide, right after killing their children. As with Hitler, they ordered that their bodies be burned immediately so that they would not become trophies of the Red Army. Similarly, Germany Army generals Wilhelm Burgdorf and Hans Kreb both shot themselves in the head with their service pistols in the Bunker. While there is no exact figure on the number who died by their own hands in the Bunker, many eyewitness accounts allude to a dozen, maybe more, such deaths in the closing days of April 1945, many out of desperation as well as fanaticism.

4. At the very end, Hitler gathered his loyal staff and released them from their oath to him, even if there was no way out

When it became clear that all was lost, Hitler resigned himself to his fate. Before he did so, he explicitly freed his staff from their oath of duty to him. Up until this point, they had all vowed to die before leaving their leader. This meant that his secretaries, as well as other staff such as his young couriers or radio operators, were free to leave. For instance, Heinz Linge was given permission to leave the Bunker by Hitler himself – but only after he had performed one last duty, guarding the Fuhrer’s bedroom while he committed suicide and then burning his body afterwards.

In her memoirs, Erna Flegel, who served as Hitler’s nurse in the Bunker, revealed that the Fuhrer personally thanked and said goodbye to his staff on the evening of April 28, 1945. He even handed them all cyanide capsules, half-joking that he wished he could give them nicer gifts. That evening, he would kill himself. The following morning, the staff were advised that they were free from their oaths to the Fuhrer and the Nazi Reich and could leave the Bunker – even if few dared to venture above ground, where the feared Red Army were taking Berlin street by street.

3. Not everyone tried to escape – some preferred to take their chances below ground than run the risk of facing the Red Army on the street of Berlin

It wasn’t just the secretaries and typists who were allowed to leave the Bunker. One of Hitler’s final orders had been to give permission for German soldiers to try and break out of Berlin, on the proviso, of course, that they carry on fighting. Under Wilhelm Mohnke, the remaining troops were divided into ten groups, each escaping on a different day. Gunther Schwagermann, adjutant to Josef Goebbels, was one of those who made it out only to be captured by advancing American troops. Martin Bormann also got out but was killed by Soviet soldiers a few streets away.

The idea that Hitler somehow also managed to escape not only the Bunker but also war-torn Germany, right under the noses of the Soviet soldiers, emerged soon after the end of the war. After all, several high-ranking Nazis did make it out of Germany after 1945. However, the accounts of witnesses, most notably of those people who were in there with him at the very end, plus the fact that dental remains found on a corpse half-buried at the entrance to the Bunker matched Hitler’s own dental records, suggests it’s almost certain the dictator never made it out alive.

2. When the end came, the first Soviet troops in the Bunker behaved respectfully – and were more interested in the food than the young female secretaries

According to Antony Beevor, at least 100,000 German women were raped in Berlin during the Soviet invasion. Of these an estimated 10,000 died, many of them committing suicide out of shame or from the trauma. Small wonder then that the few remaining people holed up in the Bunker at the very end of April 1945 were terrified of what was in store for them. According to Hitler’s nurse Erna Flegel, there were just â€˜six or seven’ people, including herself, below ground when the Russians took Berlin. Those who hadn’t tried to escape had simply killed themselves.

Despite their fears, the Russians taking the Bunker was apparently a calm event. Speaking to Allied interrogators in 1945, Frau Flegel explained that the call came on May 2nd; a nurse above ground telephoned down to inform them that the Russians had arrived. Soon after, a handful of Soviet troops “had a look around” and were far more interested in the food supplies they found than in the women. Indeed, the nurse acknowledged that these soldiers treated her and her fellow survivors “very humanely”, even advising her to lock the Bunker door after them when they left.

1. To keep it from being turned into a sick neo-Nazi shrine, all traces of Hitler’s Bunker have been destroyed over the years

Even the Soviet Union had no desire to celebrate their victory by turning the Bunker into a tourist attraction. Shortly after the end of the war, the underground complex was sealed up and the vast Chancellery complex above demolished completely. Then, in the 1980s, the East German regime began work on an apartment block close to the site. Workers opened up the underground bunkers again and then completely destroyed them. At last, all traces of the Nazi past had been removed from this infamous corner of Berlin.

It was only in 2006 that the Berlin authorities actually confirmed that the nondescript parking lot sits on the spot where Hitler killed himself and brought the darkest period of German history to an end. As well as the barest of historical information, the low-key noticeboard also includes a diagram of the layout of the Bunker to give an impression of just how claustrophobic and depressing it was down there in the spring of 1945. Nowadays, the Holocaust Memorial, just a short walk away, attracts far more visitors than the site of the Bunker.

“Hitler’s last 24 hours: I want to be a beautiful corpse, said Eva amid a frenzy of sex and drinking.” Daily Mail, April 2015.

“‘His authority was extraordinary. He was charming’ – Hitler’s nurse on his final hours.” The Guardian, May 2005.

“Adolf Hitler suicide 70 years on: what became of the Nazi leader’s bunker?” The Telegraph, April 2015.