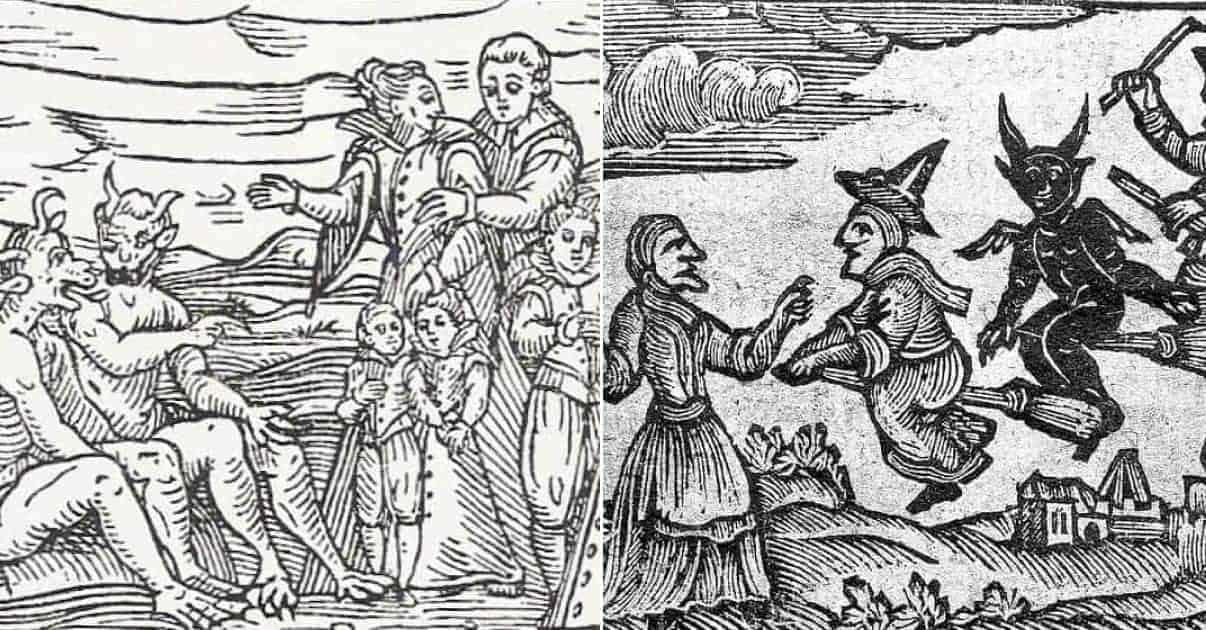 The most heinous of all crimes alleged to have been committed by witches in the Malleus is undoubtedly eating children. In addition to the universal horror of such an act, children are celebrated in Christianity for their purity (eg. the continuing popularity of Jesus depicted as an infant), and Herod’s Massacre of the Innocents is seen as a particularly lamentable atrocity. To accuse witches of child-cannibalism, Kramer was using the most potent weapon in his arsenal. The supposed danger of witches to children was particularly alarming at a time when infant mortality was high, doubtless increasing the Malleus‘s influence.

One convicted witch revealed how they killed and ate children: â€˜with our spells we kill them in their cradles or even when they are sleeping by their parents’ side, in such a way that they afterwards are thought to have been overlain or to have died some other natural death… then we secretly take them from their graves, and cook them in a cauldron, until the whole flesh comes away from the bones to make a soup which may easily be drunk’ (Malleus Part II Question 1 Chapter 2), the rest being used for the flying ointment (see above).

Kramer also reveals a wider conspiracy, of course amongst women. â€˜We must not omit to mention the injuries done to children by witch midwives, first by killing them, and secondly by blasphemously offering them to devils’ (Malleus Part II Question 1 Chapter 13). Untold numbers of infants were believed to have been killed by midwives: â€˜in the diocese of Basel at the town of Dann, a witch who was burned confessed that she had killed more than forty children, by sticking a needle through the crowns of their heads into their brains, as they came out from the womb’ (Ibid.).

Midwives, with their unquestioned access to newly born (and hence unbaptised) children, at a time of high infant mortality, were an easy target for conspiracy theories. Kramer’s repulsive misogyny is also an important factor in this accusation. Men largely had no part in the birthing of children in this period, leaving a group of women unattended: clearly, they must be up to no good. With the unrelated statistics of stillborn children and those for whose condition at birth science had yet to find a remedy, to a misogynistic and witch-fearing mind no further proof was required of the midwife conspiracy.

The devil delights in blasphemy, and is said to be present at any such act: Dr Faustus only manages to summon a demon by incidentally blaspheming in frustration. Blasphemy is a contractual obligation when for witches making a pact with the devil: â€˜the devil asks whether she will abjure the Faith, and forsake the holy Christian religion and the worship of the Anomalous Woman (for so they call the Most Blessed Virgin MARY), and never venerate the Sacraments’ (Malleus Part II, Question 1, Chapter 2). In so doing, the witches are angering God, and hence pleasing their master, the devil.

It may come as a surprise to learn that witches were still known to attend Mass, despite their allegiance to Satan. Mass however gave them an opportunity to please their master: â€˜they are bound to observe certain other abominable ceremonies at the command of the devils, such as to spit on the ground at the Elevation of the Host, or to utter, either verbally or otherwise, the filthiest thoughts’ (Malleus Part II, Question 1, Chapter 4). This particular claim is especially dangerous: even regular churchgoers, not merely those known to skip Mass, were under suspicion of witchcraft.

Witches (thus especially women) were to be observed closely when taking the Eucharist: â€˜they receive the Lord’s Body under their tongue instead of on the top… the reason is that they never wish to receive any remedy that might counteract their abjuration of the Faith… and because in this way it is easier for them to take the Lord’s Body out of their mouths so that they can apply it… to their own uses, to the greater offence of the Creator’ (Malleus Part II, Question 1, Chapter 5). Other sacred objects could also be stolen and defiled for black magic.

It is one thing knowing to be fearful of witches, but quite another to be able to find and prosecute them. Kramer dedicates the third part of Malleus to just this, despite his lack of success at Innsbruck. Prosecution begins with an accusation but, Kramer warns, this â€˜is full of danger to the accuser, because of the penalty of talion… if he fails to prove his case’ (Malleus Part III Question 1). In practice, however, few false accusers were ever prosecuted for slander, as definitive signs of witchcraft were so nebulous and unsubstantiated that almost anyone could be convicted.

The advice is very specific. Although Kramer does not allow for â€˜mortal enemies’ to be called as witnesses for the prosecution, he makes an exception for women (all being naturally vengeful), and effectively legitimises mob rule when he says that biased witnesses may be used if there is general consensus of the suspect’s guilt. The accused can then be interrogated, having sworn on the Four Gospels, about their life, before being asked about the rumours of witchcraft. Disbelief in the existence of witches is a particular sign of guilt, along with any denials that run contrary to popular consensus.

The alleged-witch’s house must then be thoroughly searched, sometimes with the accused, who must not be allowed into their own room, because they often â€˜bring away with them, some object or power of witchcraft which procures them the faculty of keeping silent under examination’ (Malleus Part III Question 8). The suspected witch must be carried on wooden planks to stop them touching the ground and thus regaining any witch-powers. The Inquisitor must then be satisfied that there is a foundation to the accusation, having examined the witnesses and considered the suspect’s defence, and can then proceed to the torture stage.

The torture process defies logic. â€˜Common justice demands that a witch should not be condemned to death unless she is convicted by her own confession’ (Malleus Part III Question 13), demurs Kramer. But if common consensus is against the accused, Inquisitors can resort to torture. If the terrible pain is too much for the suspect, and they confess, this shows that God is on the side of the justice: â€˜unless God… compels the devil to withhold his help from the witch, she will be so insensible to the pains of torture’ (Ibid.). Anyone universally-loathed was thus guilty before torture.

Whilst torturing the accused, the Inquisitor must take precautions. Witches, for example, cannot shed tears, so must be keenly-observed. The Inquisitor must also avoid being touched, lest he be bewitched in this way. The accused must also be shaved, so that magical objects preventing confession cannot be concealed. The torture must also be peculiarly horrible to each case, giving dangerous licence to particularly cruel Inquisitors: â€˜if the sons of darkness were to become accustomed to one general rule they would provide means of evading it as a well-known snare set for their destruction’ (Malleus Part III Question 15).

Once a witch had been found guilty, an appropriate sentence had to be passed. The Inquisitor is instructed on all manner of circumstances, from those found guilty but not confessing to others condemned by fellow witches without formal evidence, with punishments ranging from public penance to death. The main achievement of the Malleus was to elevate witchcraft to the crime of heresy, which was already established as punishable by death (NB the Knights Templar, who were convicted of heresy in the early fourteenth century, and executed en masse). In practice, the vast majority found guilty of witchcraft were executed.

The Malleus justified its strict punishment of witches with Exodus 22:18: â€˜thou shalt not suffer a witch to live’. The most common method of killing witches was to burn them, which was the established method of despatching heretics. The idea was that the horrible method of execution would lessen the heretic’s suffering in the afterlife, and even purge them of sins if accompanied by a penitent confession. Most of the witches whose confessions make up the text’s anecdotal evidence were burned at the stake, and so it is no surprise that those closely following Kramer’s advice seldom showed any clemency.

A typical burning involved tying the convicted witch to a stake surrounded by bundles of wood and straw, which were set alight. Although inhaling the smoke killed most by suffocation, there were reported cases in which people suffered horrendous injuries and unimaginable suffering before succumbing. The town of Como, at which Kramer says 41 witches were burned in 1485, again burned so many people in 1523 that travellers described the town appearing as if surrounded by a forest. Once the witch was reduced to ashes, Kramer instructs Inquisitors to try members of their family, since covens often comprised relatives.

In England, witches were hanged, rather than burned, and this raises an interesting point. Since witches not only sinned against the Church but destroyed property and murdered people, witch trials were matters for both civil and ecclesiastical courts (Malleus Part III Question 16). Unless guilty of murdering their husbands or attempting to murder the reigning monarch, English witches were hanged as common criminals, rather than burned as heretics like many Catholics and Protestants during the horrors of the Reformation and Counter-Reformation. Taking much of its law from England, witches in early America were also hanged rather than burned.

To conclude, behold the most shocking fact of all about the Malleus Maleficarum: there is not a shred of evidence that anyone was actually guilty of Satanic witchcraft during the witch craze. People were convicted on the basis of malicious gossip, natural phenomena such as animals and children dying, animals appearing near their houses, the use of traditional herbal remedies, and the exchange of cross words. The accused would frequently say anything to escape the agonies of torture, which undermines all first-hand accounts. Witches existed in Early Modern Europe, but only in superstition and the perverted minds of the Inquisitors.

Trevor-Roper, H. R. The European Witch-Craze of the Sixteenth and Seventeenth Centuries: and Other Essays. London: Harper and Row, 1969.