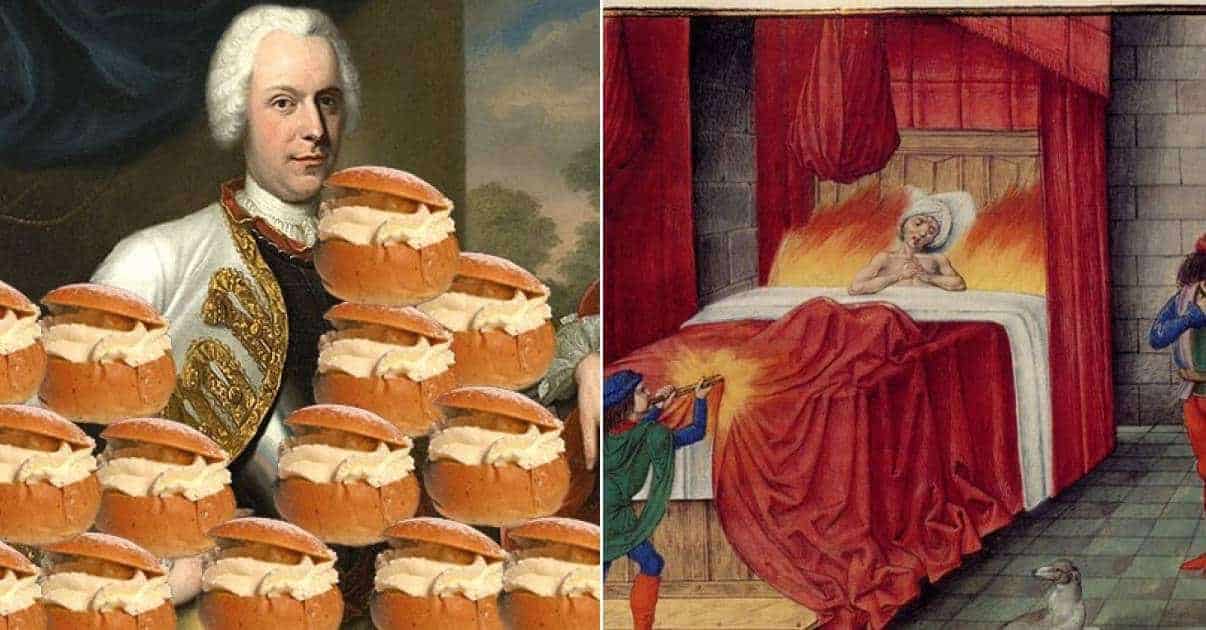 Charles II of Navarre Was Burned in His Bed

Known as Charles the Bad, Charles II of Navarre (1332 – 1387) was a French aristocrat with extensive holdings. In 1349, he became king of Navarre, a small kingdom on the Pyrenees mountains between France and Spain. He earned the nickname “the Bad” because of his bad faith dealings, betrayals, dishonesty, and double crosses as he attempted to enlarge his kingdom.

During the Hundred Years War, he schemed with the English to betray France, and was jailed by France’s king John II when his treason came to light. Charles escaped, and in 1357, began plotting with various French cabals, betraying nearly all. After John II’s death, his successor forced Charles to surrender most of his lands in France. Charles kept intriguing, however, and in 1378 evidence of new treachery was discovered. It emerged that Charles not only sought to again betray France to the English, but also to poison the French king. Charles was made to surrender nearly all his remaining French holdings.

Charles’ bad reputation was no better in Spain, where he allied with Peter the Cruel of Castile against Peter IV of Aragon in 1362. The following year, he switched sides and betrayed Castile, allying with Peter IV against Peter the Cruel. In 1378, Castilian armies invaded Navarre, forcing Charles to flee. Trusted by none and without allies, Charles had to sign a humiliating treaty that reduced him and his kingdom to Castilian puppets.

His undignified end came in 1387, when a doctor directed that he be swaddled from head to foot in linen cloth steeped in brandy or other spirits of wine to cure an illness. A serving woman was tasked with securing the swaddling cloth snugly around Charles’ body, by sewing it in place with yarn. One night, she forgot to bring scissors to snip off the excess yarn, so she resorted to a common alternative for thread cutting – using a candle’s flame to burn off a section of yarn. The alcohol-infused cloth caught on fire, and Charles the Bad, tightly swaddled in the burning linen, was unable to escape. He suffered horrific burns all over his body, and lingered for weeks in excruciating pain before he was finally relieved by death.

Catherine II, also known as Catherine the Great (1729 – 1796), was Tsarina, or empress, of Russia from 1762 until her death. A German born princess, she ascended the throne after she had her husband, Tsar Peter III, assassinated. She continued the westernization work begun by Tsar Peter the Great, and by the end of her reign, Russia had fully joined the mainstream of European political and cultural life. Her regal reign was not to be matched by a regal and dignified death.

She was born Sophie Friederike August von Anhalt-Zerbst into a minor German aristocratic family. At age 14, she was married to the grandson of Tsar Peter the Great and heir to the throne, Grand Duke Peter. The marriage proved a disaster, as Peter was extremely neurotic, mentally unstable, and probably impotent. The following 18 years were full of humiliations and disappointment.

She took a series of lovers, and strongly hinted that none of the children born during her marriage were Peter’s. When her husband became Tsar in 1761, he quickly alienated his court and nobles by making little effort to hide his contempt for Russia, and his preference for his native Germany. When he started making moves to rid himself of Catherine, she beat him to the punch, and joined a conspiracy which staged a military coup in 1762. Peter was seized and forced to abdicate, and 8 days later, was murdered.

Catherine was then crowned Empress, and ruled Russia for the next 34 years. During that period, the Russian Empire expanded rapidly with a combination of conquests and diplomacy. To the west, the Polish-Lithuanian Commonwealth was partitioned with Austria and Prussia, with Russia getting the lion’s share. To the south, successful wars against the Ottoman Turks led to the conquest and annexation of the Crimean Khanate. The territories of Novorossiya – the Russian speaking parts of today’s Ukraine – were colonized by Russians. Colonization also stretched far into the east, including Alaska and the foundation of Russian America. Domestically, she reformed the laws and administration of the Russian Empire, bringing them closer to contemporary European standards.

After a long and successful reign, her death came in an undignified manner. Rumors circulated that the insatiable Catherine had died after sustaining injuries from having sex with a horse. The truth was less scandalous, but embarrassing all the same for her imperial majesty. The empress had been feeling constipated, and during a heroic effort to force relief on the toilet, she overstrained herself and suffered a fatal stroke.

When her loud gruntings ceased, her maids waiting outside assumed that her majesty had finally found relief. They started getting nervous, however, as the minutes dragged on without Catherine emerging or summoning them. Eventually they delicately inquired if all was well. Hearing no answer, they took a peak, and found the Empress of All the Russias dead on the toilet.

Crown Prince Sado Was Locked in a Rice Chest

Crown Prince Sado (1735 – 1762) was the son of Korean king Yeongjo, and heir to the throne. He was the king’s second son, but the first one had died in 1728. For years, the king’s wives and concubines had given him only daughters, and he despaired of ever getting another male heir. When Sado finally arrived in 1735, he was met with great rejoicing. According to tradition, the infant was set up in his own palace with an army of maids and governesses and servants. However, his father took little part in raising and looking after his upbringing, so Sado was spoiled rotten and grew up doing what he liked.

When his father did stop by to visit, he was highly irritable, and grew angry at even trivial missteps by his son. Sado grew up oscillating between a great fear of his father, and a desperate need to please him. Pleasing the king was difficult, however, for his father was not given to displays of affection, and whenever the two met, the king was far more critical than affectionate. As a result, Sado grew up feeling unloved and resentful. Between those daddy issues, perceived lack of affection, lack of fatherly supervision, indulgence and flattery by courtiers, and other deep seated neuroses, something broke inside Sado and he grew up to become a monster.

He was a troubled young man, given to extremely violent and erratic mood swings. One day, he would behave with such decorum, dignity, and probity, so as to be all that his father had ever wanted in a son and heir. The next, he would undergo a transformation, and give free rein to violate outbursts during which he would turn rapist and murderer. Historians are unsure what exactly ailed him, but he was clearly mentally unstable, and many today think that he was schizophrenic.

Although alcohol was forbidden at court, the Crown Prince was given to downing heroic amounts of wine and spirits, and became a raging alcoholic. When a depressive mood fell upon him, murdering servants brought Sado relief, and on many a day, several dead bodies were carried out of the palace. He also enjoyed raping court ladies, and after murdering his concubine, he started sexually harassing his own sister. As a result, he became widely feared throughout the kingdom as a serial rapist, serial killer, and all around dangerous psychopath.

Eventually, his father had enough, and determined that he could not, in good conscience, inflict his criminally insane son upon the Korean people as their next king. On July 4th, 1762, Sado was summoned by his father, who ceremonially struck the floor with a sword and declared the crown prince deposed. Taboos prohibited the outright execution of the prince, so the king had Sado placed inside a heavy wooden chest used for storing grain, and locked him inside. There, the deposed prince was left to starve to death, which arrived 8 days later.