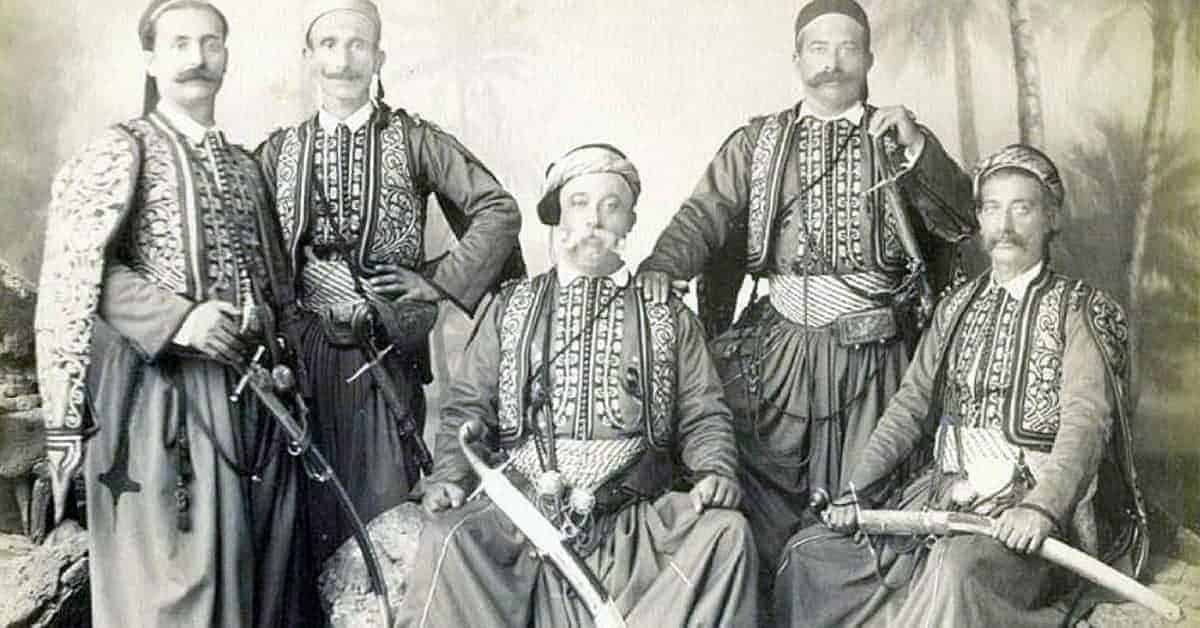 Perhaps the world’s most recognizable sword, thanks to Hollywood and TV, the katana is a single-edged curved sword, with a long handle for two-handed use that features a square or circular guard, and a slender blade usually measuring two and a half feet in length. They are among the finest cutting weapons in history, and were used by Japanese samurai since feudal times, with the earliest recorded mention in the historic record dating to the 12th century.

Katanas are the product of natural evolution, having started off as hefty “great swords” that grew thinner, lighter, and more agile over time in order to meet the demands of emerging combat styles that were increasingly reliant upon speed. They became popular with samurai because the ease and speed with which they could be drawn was a decided asset for the newer and faster-fighting styles, collectively dubbed kenjutsu, the art of sword fighting, in which the issue was often settled within seconds, and speed of reaction spelled the difference between life and death.

Katanas, coupled with a smaller sword, were thrust, sharp edge facing upwards, through the bearer’s obi – a sash wrapped tightly around the samurai’s waist – in a configuration known as daisho that identified the wearer as a samurai, and only members of that class were authorized to tote paired swords in that fashion. Wearing the katana in the daisho style facilitated a speedy draw, ideally allowing the samurai to draw and cut down his opponent in a single fluid motion, and an entire martial art, Iaido, was dedicated to the speedy retrieval of the katana from its scabbard.

Katanas are made from tamahagane steel, which is produced by traditional Japanese smelting processes that result in layered steels with varying carbon concentrations, that are welded, folded, and hammered out to reduce impurities. A katana needs a sharp and hard edge, but steel that is hard enough for a sharp edge is brittle, while softer steel that is not brittle will not take and retain a sharp edge. Katana makers solved the dilemma by using four metal bars: a soft iron bar to guard against breaking, sandwiched by two hard iron bars to prevent bending, and rounded off with a steel bar to take the cutting edge.

The four bars were heated at high temperature, then hammered into a long bar that would become the blade. Contrary to myth, samurai blades were not folded thousands or even hundreds of times – that much folding would be counterproductive and render the steel useless for a sword. When the sword was sharpened, the steel took a razor-sharp edge, while the softer iron prevented the blade from breaking. Well-crafted katanas became prized heirlooms, passed down generations of samurai families for centuries, and magnificent specimens of centuries-old katanas can be seen in the Tokugawa Art Museum in Nagoya, Japan.

The Viking sword was a double-edged and relatively light straight sword that weighed between 2 to 4 pounds, thanks to a fuller running down the blade’s length that reduced weight without compromising strength. The blade, measuring between two and three feet, and 1.5 to 2.3 inches wide, was balanced by the hilt and pommel, while a slight blade taper helped bring its center of balance closer to the hilt. The grip was typically made of wood wrapped in leather, or for swords owned by the wealthy, the grip could by wrapped with gold or silver wire. By the close of the Viking era, blade lengths had increased, and some recovered samples dating back to that period had blades up to three and a half feet long. The sword’s tip was not pointed, but rounded – a rounded tip is stronger than an acute one, without being significantly less effective in piercing than a sharply pointed blade.

“Viking sword” is actually a misnomer, implying that it had been developed or used more commonly by Vikings than other peoples, when that was not the case. It was actually developed by Frankish swordsmiths in the Frankish Empire during the Carolignian era, but got its name because the most and best-preserved samples were recovered by archaeologists from Viking burial sites. By the time the swords’ true provenance had been recognized, the name “Viking sword” had already stuck, notwithstanding that “Carolignian sword” or even “Viking era sword” would have been more accurate.

Viking swords first emerged during the 8th century, having evolved from the Merovignian sword, which in turn had evolved from the Roman spatha, and were prevalent in Northern and Western Europe during the early Middle Ages. Early versions were made via pattern welding, in which iron bars of soft and hard qualities, for flexibility and strength, respectively, were combined, heated to weld them together, then twisted and drawn out in a thin strip that eventually became the blade. Later, pattern welding was abandoned after advances in metallurgy produced quality iron that could be smelted into good steel for sword blades.

In use, the Viking sword was wielded one-handed, although some historic texts mention two-handed use. However, the space on the sword’s handle between hilt and pommel, while commodious for a single-handed grip, is too small to be gripped by two hands. Some speculation posits that the texts might have meant not two hands on the handle, but one hand gripping the sword, while the other cupped the wrist of the sword hand to deliver blows with significantly more power.

Developed from the Viking sword and tracing its roots back to the Roman spatha, the arming sword, also known as the knightly sword, was a double-edged straight sword with a blade usually measuring between 28 to 32 inches, although some had blades of up to 39 inches, and that featured a single-handed cruciform hilt that gave it a distinctive cross shape. It was prevalent as the main European sword from the 11th to 14th centuries, after which it was edged out by the longsword and relegated to the role of a secondary weapon or sidearm – hence the name “arming sword”.

The transition from the Roman spatha-based Viking sword to the Medieval arming sword went through the intermediate phase of the Norman sword of the 9th and 10th centuries, which witnessed a simplification of the pommel to a disk or hazelnut, and the growth of the Viking sword’s spatha handguard into a full crossguard – the main visually distinguishing feature of both the arming sword and its successor, the longsword.

By the 11th century, the transformation had been completed, and the arming or knightly sword, now featuring a more slender and tapered blade than that of the Viking sword, with a sharper tip than the more rounded one of the Viking sword, and a center of mass closer to the hilt that improved the weapon’s handling, had become the dominant state of the art European sword.

Typically used with a shield or buckler, the arming sword was an excellently balanced light and versatile weapon, useful for both thrusting and cutting. It was the main weapon of the Crusader knights, and remained the most popular sword on European battlefields throughout the late Middle Ages and into the opening stages of the Hundred Years’ War. Its heyday finally came to a close in the 14th century, which witnessed changing tactics and battlefield conditions, particularly the growing use of plate armor, against which the arming sword was of little use.

Starting in the late 12th century, arming sword designs began to polarize in reaction to the increasingly tougher armor encountered on the battlefield, becoming either longer and heavier for concussive impact and the infliction of blunt trauma through the armor, or more squat and sharply pointed to pierce the armor with a thrust. By the mid 14th century, an entirely different sword, the longsword, had emerged in response to the new armor, and proved more effective at dealing with it than the arming sword could. Thus the longsword supplanted the arming sword, and the latter was relegated to a secondary weapon or sidearm.

The European longsword saw its heyday between the mid 14th to mid 16th centuries, during the close of the Middle Ages and into the Renaissance. Usually weighing 5 to 8 pounds, longswords are characterized, as the name indicates, by their length, with straight and double-edged blades measuring between 33 inches to four feet in length, plus long handles designed for a two-handed grip, of between 6 to 15 inches. The longsword’s other distinguishing feature is its cruciform hilt, which gave the weapon a pronounced cross shape.

Longswords were designed to deal with the emergence of increasingly tougher armor, particularly plate armor, that standard sword such as the knightly or arming swords could not deal with. In proficient hands, the longsword could defeat such armor. They first emerged in the opening stages of the Hundred Years War (1337 – 1453), and for the following two centuries they were used by knights in plate armor, whether from horseback or on foot. By the late 14th century, the longsword’s use had begun to spread to unarmored foot soldiers as well – a usage first pioneered by Swiss mercenaries.

The longsword is a cut and thrust weapon, with a light point and cutting edges designed for targets unarmored and armored. Against the latter, blows were ineffective at slicing or cutting, but could nonetheless prove telling when applied with sufficient force to deliver a concussive impact to stun and disorient the armored opponent, and leave him temporarily vulnerable to a more lethal follow up. Notwithstanding its size, in the hands of a competent user the longsword was a quick and versatile weapon that could effectively deal out lethal thrusts, slices, and cuts.

By the late 1300s, codified systems of longsword combat had emerged throughout Europe, and in its heyday, various fighting schools and fighting styles sprouted to instruct on the martial art of longsword fighting. Such schools seem to have been especially popular in Germany, which produced the most renowned longsword teachers and fight masters.

The longsword’s long handle was designed for a two-handed grip that could deliver powerful cuts and thrusts, and longsword fighting featured a variety of moves, ranging from straightforward swordplay with stabbing, hacking, and slicing, to complex martial art maneuvers that entailed wrestling, grappling, and disarmament techniques. In the hands of wielders with armored gloves protecting their hands, the longsword could also be employed in a manner known as “half-swording“, whereby the user kept one hand on the hilt and the other on the blade to deliver well-controlled and powerful jabs and thrusts. Longswords, especially those with a diamond cross-section, could penetrate plate armor with a well-applied half-sword thrust.

Lethal usage was not restricted to the longsword’s blade, and techniques were taught whereby the pronounced crossguard could be used to trip the foe or knock him off balance, to jab into the opponent’s face, or swinging the sword by the blade like a hammer, the crossguard could also be used to pierce the enemy’s helmet and skull. The pommel could also be used after a swing in a quick reverse jab to the opponent’s head or body, or more straightforwardly applied with brute force to pummel and smash in his helmet and head.

After a centuries-long heyday, changing tactics and developments ended the longsword’s battlefield utility. By the mid-1500s, projectile weapons such as crossbows whose bolts could pierce armor, and the newly introduced firearms, had come to rule the battlefield and made plate armor obsolete, and the wielders of such weapons were protected by blocks of infantry wielding pikes. Against that combination, and with the disappearance of the plate armor that had given rise to longswords, longswords ceased to offer any particular advantage. By the late 16th century, the longsword had become militarily obsolete since there was no longer a need for its power and reach on the battlefield. Thus, swords became smaller and went back to normal lengths, while longswords were relegated to sporting competitions and knightly duels.