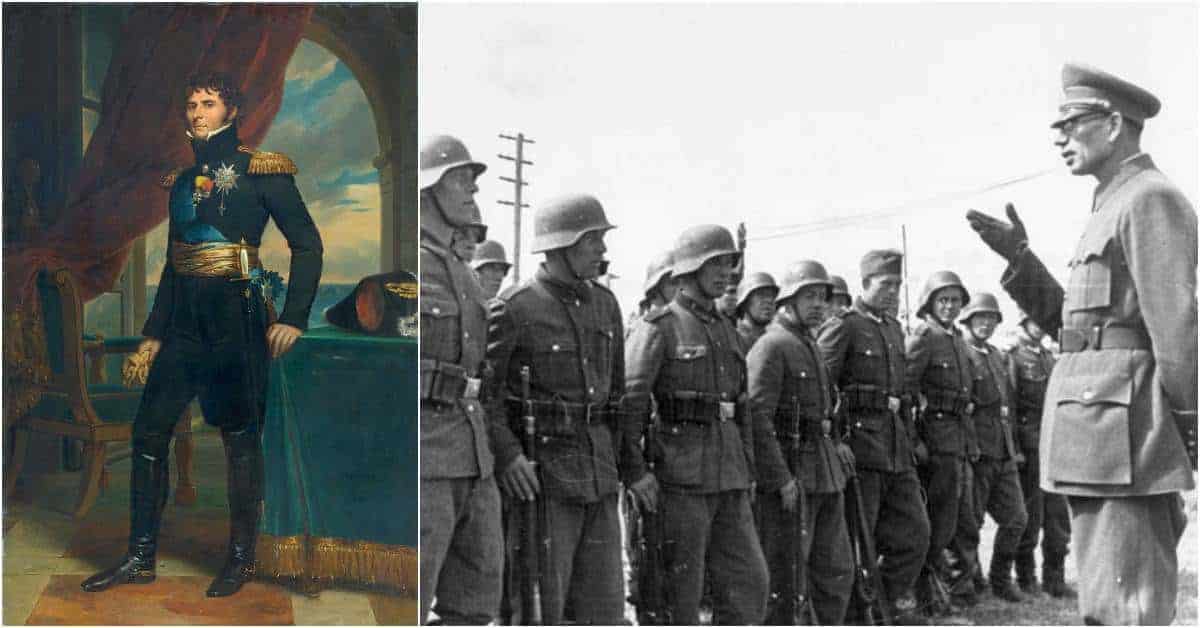 Benedict Arnold (1741 – 1801) is America’s most notorious turncoat, whose name became an epithet, synonymous with treason. He had played a leading role early in the American War of Independence from Britain, and had probably been the rebelling patriots’ most capable general and combat commander, before resentments over slights, coupled with financial distress, led him to switch sides.

Before his treason, Arnold had fought valiantly for the revolutionaries. Early in the conflict, he even played a leading role in capturing Fort Ticonderoga. He then led an expedition through difficult terrain in an attempt to capture Quebec, and although the expedition ultimately failed, it demonstrated great leadership skills on Arnold’s part that he even managed to get his force to the outskirts of Quebec.

In 1776, a creative Arnold constructed a fleet from scratch at Lake Champlain, with which he defeated a superior British fleet. While proclaimed a hero, he also aroused the resentment and jealousy of fellow officers, who began a whispering campaign to tarnish his name. In 1777, Congress created five new major generals, and Arnold was aghast upon discovering that his name was not on the list while some of his juniors were.

He was kept from resigning only by personal pleas from George Washington. A short time later, after defeating a British advance into Connecticut, Arnold was finally promoted to major general. However, his seniority was not restored, which he took as another slight. He again sought to resign his commission but was prevailed upon to remain. He performed brilliantly in thwarting the British advance from Canada into upstate New York in 1777, and was instrumental in bringing about its defeat, culminating in the British surrender at Saratoga, where Arnold suffered a serious wound.

Crippled by his injuries, he was made military commander of Philadelphia, where his socializing with loyalist families and lavish lifestyle, which he financed with questionable dealings, led to scandal. His marriage to a much younger woman of loyalist sympathies and extravagant spending habits soon pushed him into debt, and between stewing over slights and his increasing financial difficulties, Arnold secretly approached the British, offering to switch sides.

After his stint in charge of Philadelphia, Arnold was put in command of West Point, a fortified position on the Hudson river, upstream from British-occupied New York City. West Point barred the British from sailing upriver. Arnold schemed to sell the British plans of the fortifications, and to help deliver them into their hands, for £20,000. However, his British contact, major John Andre, was captured, along with documents incriminating Arnold, who barely escaped ahead of arrest.

Arnold was then made a brigadier general in the British army, and led Redcoats against his former comrades. His new masters never warmed to him however, and he was unable to secure a regular commission in the British Army after the war. After the conflict’s end, he engaged himself in a variety of enterprises, including privateering and land speculation in Canada, before finally settling in London, where he died in 1801.

Jean-Baptiste Jules Bernadotte (1763 – 1844) was a French Revolutionary general who was granted high rank and honors by Napoleon Bonaparte. Bernadotte returned the favor by switching sides, and at the head of a Swedish army, helped defeat Napoleon at the Battle of Leipzig in 1813, the Napoleonic Wars’ largest and bloodiest single engagement, whose lose effectively sealed Napoleon’s fate.

The son of a prosecutor, Bernadotte enlisted in the French army at age 17. When the French Revolution erupted, he became an ardent supporter. Within two years, between 1792 and 1794, he experienced rapid promotions from sub-lieutenant to brigadier general in the Revolutionary armies. Campaigning in the Low Countries, Germany, and Italy, he developed a reputation as a disciplinarian who kept his troops under tight control, and in 1796 he played a key role in saving the French army in Germany from destruction following its defeat by the Austrians and ensured its safe retreat across the Rhine.

Bernadotte first came in contact with Napoleon in 1797, and the pair developed an early friendship, which eventually frayed and broke as a result of rivalries and misunderstandings. While relations between the two were still good, however, Napoleon recognized Bernadotte’s talents, and in 1804 – following his declaration of empire and Bernadotte’s declaration of loyalty to him – Napoleon appointed him a Marshall of France.

Following the successful 1805 Ulm Campaign and victory at the Battle of Austerlitz, Napoleon further rewarded Bernadotte by making him Prince of Ponto Corvo in Italy. Things began to sour between the two, however, during the Prussian campaign in 1806, when Napoleon severely criticized Bernadotte for failing to bring his corps to the fight at the hard-fought battles of Jena and Auerstadt, and barely refrained from court-martialing him for dereliction of duty. The relationship was sundered at the 1809 Battle of Wagram, after which Napoleon relieved Bernadotte of command for his poor handling of his troops during the fight. Napoleon sent him back to Paris under the face-saving guise of “health reasons”.

Things soon looked up for Bernadotte, however, when the childless and ill king Charles XIII of Sweden, a French ally and client state, adopted him in 1810 and made him Crown Prince and heir to the throne. Bernadotte assumed the regency and governance of Sweden, and cast about for an accomplishment to solidify his authority and future dynasty.

The opportunity came when Napoleon was weakened following the destruction of his Grande Armee after his catastrophic invasion of Russia in 1812. In 1813, Bernadotte switched sides, signed a treaty with Britain, and declared war on France. He landed a Swedish army in northern Germany, and in alliance with the Austrians, Russians, and Prussians, got his payback against Napoleon by helping defeat him in the war’s biggest and bloodiest battle, at Leipzig, in 1813. After the war, he returned to Sweden, where he established the Bernadotte Dynasty, whose royal family reigns in Sweden to this day.

Andrey Andreyevich Vlasov (1900 – 1946) was one of Joseph Stalin’s favorite Red Army generals, who turned on the Soviet dictator during WWII and switched sides after his capture by the Germans in 1942. Throwing in his lot with the Nazis, Vlasov turned coat and fought with the Germans against the Soviet Union at the head of the so-called Russian Liberation Army.

Vlasov had been drafted into the Red Army in 1919 and fought in its ranks during the Russian Civil War, during which he distinguished himself. Rising steadily through the officer ranks, he earned a reputation for his ability to whip poor units into shape. In 1930, Vlasov gave his career a boost by joining the Communist Party, and in 1938, he was sent to China as a Soviet military advisor to its generalissimo, Chiang Kai-Shek.

When the Nazis invade the USSR in 1941, Vlasov was a mechanized corps commander in the Ukraine and was one of the few generals who managed to get his unit to safety, as he successfully fought his corps out of multiple encirclements. His skill and aggressiveness brought him to Stalin’s attention, who summoned him in November of 1941 and promoted him to command an army in Moscow’s defenses.

Vlasov and his army played a key role in keeping the Germans out of Moscow, and in January, 1942, he spearheaded the counteroffensive that pushed the Germans 100 miles from the Soviet capital. He earned decorations and acclaim in so doing, plus Stalin’s admiration, who promoted him to deputy commander of the Volkhov Front, 300 miles northwest of Moscow.

Later, he was put in charge of the 2nd Shock Army after its commander fell ill, but it got cut off and encircled as it advanced towards Leningrad, and was destroyed in June 1942. Vlasov escaped temporarily but was captured 10 days later. In captivity, he agreed to switch sides. Taken to Berlin, he and other Soviet traitors began drafting plans for a Russian provisional government and for recruiting a Soviet turncoat army.

In 1943, he wrote an anticommunist leaflet, millions of copies of which were dropped on Soviet positions. Using Vlasov’s name, the Nazis recruited hundreds of thousands of Soviet defectors, forming them in a so-called Russian Liberation Army, but although they were nominally under Vlasov’s command, they were kept strictly under direct German control, with Vlasov exercising little or no authority.

His only combat against the Red Army took place while in charge of a turncoat division near the Oder river in February of 1945, during the war’s closing stages, after which he was forced to retreat to German-controlled Czechoslovakia. There, in May of 1945, a few days before war’s end, Vlasov’s division turned coat once again, this time against the Germans and in support of a Czech uprising.

At war’s end, he attempted to escape to the Western Allies’ lines but was captured by Soviet forces, who discovered him hiding under blankets in a car. He was flown to Moscow and held in its dreaded Lubyanka prison, where he underwent torture for months. He was tried for treason in the summer of 1946 along with 11 of his leading subordinates. All were found guilty and sentenced to death, and on August 1st, 1945, Vlasov and his fellow turncoats were hanged.