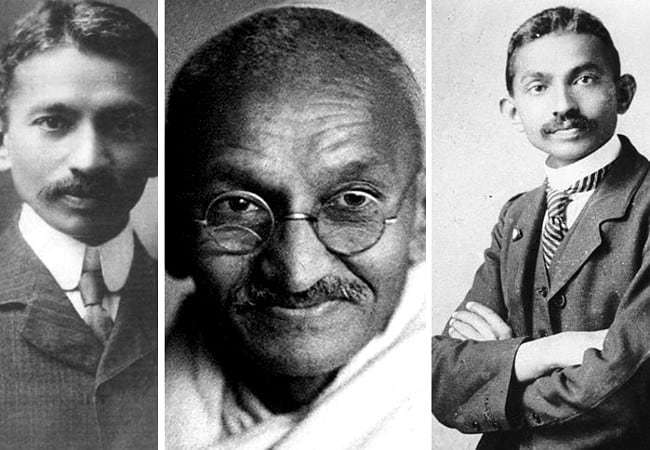 Jawaharlal Nehru, a nationalist colleague of Gandi’s, and independent India’s first prime minister, commented that the Mahatma’s pronouncements on sex were â€˜abnormal and unnatural’ and â€˜can only lead to frustration, inhibition, neurosis, and all manner of physical and nervous illsâ€¦ I do not know why he is so obsessed by this problem of sex’.

Nehru certainly shook his head over many things that Gandhi did and said, but whispers of his â€˜unnatural’ liaison with a Jewish businessman and architect in South Africa never quite reached India. Gandhi found a camaraderie in South Africa with quite a number of Jews living in the territory, perhaps, one might suppose, because of their common alienation from the mainstream of society. One of these was a Lithuanian born Jew by the name of Herman Kallenbach, who made Gandhi’s acquaintance in 1904, at the beginning of the Satyagraha movement. Gandhi was by then well on his way to developing his â€˜Mahatma’ persona, and Kallenbach was entirely transfixed. He was a body-builder, a sportsman and a robust and athletic meat-eater. He was wealthy and successful, and many of Gandhi’s comforts were provided by him.

The two men were very close indeed, unnaturally close, some were apt on occasion to comment. The relationship, however, continued without any proof of impropriety, and even today, there is no solid evidence. However, letters unearthed since Gandhi’s death in 1948 hint very strongly that, even if an intimate relationship did not exist, they certainly sailed extremely close to the wind, bearing in mind the tenor of the times.

One particular letter, handwritten by Gandhi, is addressed to Kallenbach as â€˜My dear Lower House’, and is signed â€˜Sinfully yours, Upper House.’

Kallenbach and Gandhi lived together on and off from about 1907 until Gandhi left South Africa in 1914, and the letters archived between the two are part of a collection acquired by the Indian National Archive from the Kallenbach estate. And while there has been much suspicion that the more revealing of these letters have been held back from public scrutiny, even those on display leave nothing but questions.

â€˜How completely you have taken possession of my body.’ Gandhi was quoted as saying in a letter to Kallenbach. â€˜This is slavery with a vengeance.’

It is certainly possible, and homosexuality in the Victorian period was not at all uncommon, although public expression of it were still taboo. Gandhi’s interest in sex, and his fundamental libertarianism, would certainly fit well with such experimentation, and they would probably have been many who knew him who would not have been at all surprised.

Gandhi was a miserable parent

Father of the nation he might have been, but father to his own sons he certainly was not. When Gandhi made the decision to remain in South Africa after his term of contract, to act on behalf of the Indian community of South Africa, he left his family in India. At a certain point, he returned to India, ostensibly to collected his family, but really to introduce himself to the nationalist moment in India, and it to the work underway in South Africa.

He sailed not to Bombay, however, but directly to Calcutta, and there he entered upon an overland journey by train to raise awareness. It was only after some considerable time that he wound his way to Porbandar, and almost as an afterthought that he packed the all up and brought them to South Africa.

Harilal Gandhi was born in 1888, shortly after Gandhi set sail for London to begin his studies, and until he was reunited with his father in South Africa, the two hardly resided in the same country at all. Even in South Africa, the Gandhi family were annexed at Gandhi’s compound in Phoenix, just outside Durban, where he himself was very infrequent visitor. Initially, Harilal followed dutifully in his father’s footsteps, suffering the consequences of passive resistance, and walking the walk.

At a certain point, however, he began to rebel. The breach seemed to have occurred over the matter of Harilal appealing to his father to use his growing influence to secure a scholarship for Harilal to study law in England, as his father had. Gandhi refused, citing nepotism if he did, but also because he had by then began to regard British law as an institution of the enemy, and an antithesis to the development of a pure spirituality.

Quite naturally, Harilal took this very poorly, and at every turn he began to decry and denigrate everything that his father stood for. He became an alcoholic gambler, trading in British goods, as his father was trying to organize a boycott, and eventually converting to Islam, and changing his name to Abdullah.

The two were eventually fully estranged, and just six months after Gandhi was assassinated, Harilal expired from a combination of alcohol, tuberculosis and depression. He was also, of course, stricken with liver disease from alcohol, and probably syphilis. It certainly is not a pretty picture, and added to the many other oddities of Gandhi’s nature, paint a picture of a man with numerous contradictions, as all great people, one way or another, are.

Where did we get this stuff? These are our sources:

“How many children did Mahatma Gandhi have?” Inspirational Musings, December 2006

“An odd kind of piety: The truth about Gandhi’s sex life.” Independent, January 2012