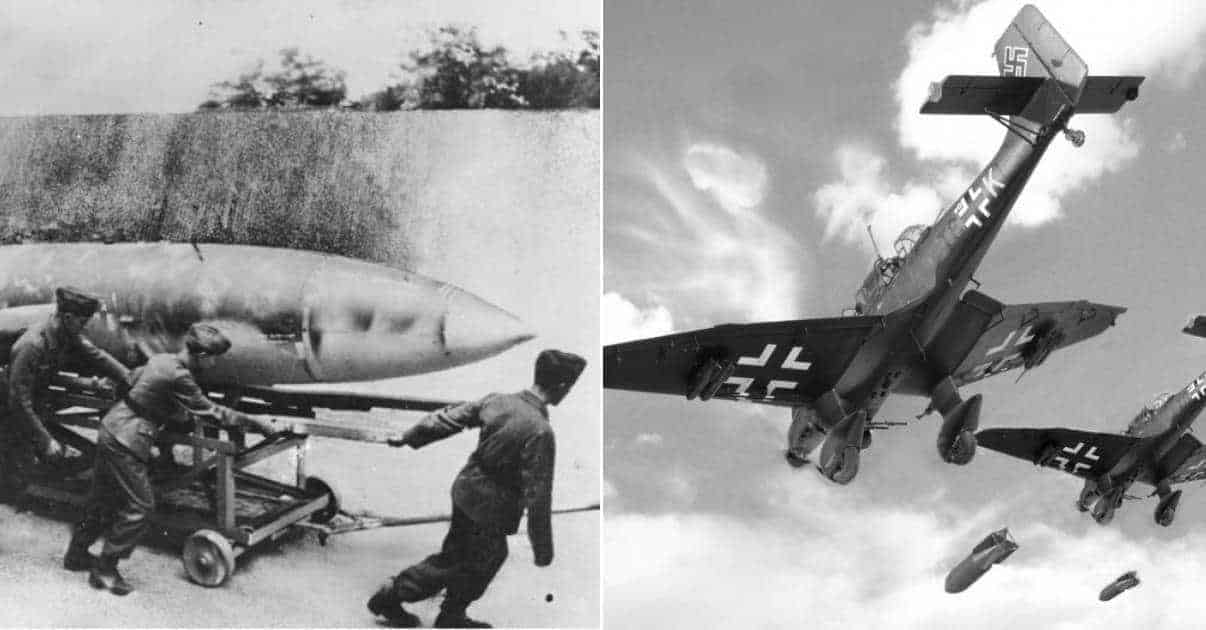 The Messerschmitt Me 262 was the most innovative and revolutionary fighter airplane of WWII. Flying at 540 miles per hour, and armed with four 30 mm cannon, it was faster and better armed than any other fighter of the conflict. Its arrival ushered the dawn of the jet age, and forever transformed aerial warfare. It came too late to stave off Germany’s defeat, but it was nonetheless a marvel of design and engineering.

The Me 262 was first flown in 1942, but its deployment was delayed until 1944 because of technical difficulties, plus inadequate support or understanding of its potential by high ranking German leaders. For example, Goering thought the war would be won with the planes Germany already possessed, so investing in projects like the Me 262 was unnecessary. Hitler, in turn, gummed up the works by supporting the development of the jet as a fast bomber instead of a fighter.

Me 262s finally saw combat with an experimental trial unit in July of 1944. However, it was not until November of 1944 that Me 262 first attacked one of the bomber formations that were roaming Germany’s skies at will by then. Results were mixed, with two escorting P-51s shot down but no bombers, for the loss of one jet fighter and the death of its pilot, an irreplaceable Luftwaffe ace with over 250 kills.

The first Me 262 fighter wing was formed in January of 1945, but by then, Allied armies were already on German home soil in both the Eastern and Western fronts. The Me 262 units’ effectiveness was hampered by organizational flaws, and a shortage of experienced pilots capable of taking full advantage of the plane’s capabilities. Lack of fuel for adequate training, plus frequent Allied attacks on their airfields, further capped the Me 262’s effectiveness.

It was not until March of 1945 that a glimpse of what might have been was seen, when Luftwaffe general Adolf Galland formed an Me 262 unit comprised of elite and highly experienced pilots. Mounting coordinated large scale jet attacks on bomber formations, the results were impressive – but too little and too late. In the first such attack, 37 Me 262s took on a formation of over 1000 bombers, protected by over 600 fighter escorts. They shot down twelve bombers and one fighter, for the loss of only 3 jets.

While such a 4:1 kill ratio was impressive, it was a pinprick, and Germany went down to total defeat a few weeks later. But if more Me 262s had been available a year earlier, and had been organized into units staffed with experienced pilots rather than novices as was too often the case, it might have made a difference. A 4:1 kill rate could have seriously complicated matters for the Allies, and the course of the war, if not its final outcome, might have gone differently.

The Allies, aware of the Me 262’s disruptive potential, devoted considerable resources to contain it. Allied fighters were at a severe disadvantage in taking on the jets at high altitude, since the Me 262s were much faster than any piston driven plane. However, the Me 262s were vulnerable at takeoff and landing, and parked on their airfields they were sitting ducks. So Allied fighters patrolled the vicinity of Me 262 airfields to try and catch them taking off or landing, and bombed them with mounting frequency. Shooting them down might have been difficult, but destroying them on the ground and wrecking the infrastructure needed to send them up in the first place was well within Allied capabilities.

The World’s Most Ridiculously Big Tanks

The Nazis were obsessed with building absurdly big things, and if they’d had their druthers, they would have built some mind bogglingly giant tanks. One such was the Ratte, which would have weighed 1000 tons, and another was the even bigger Monster tank, which would have clocked in at 1500 tons. Those behemoths never got off the drawing board, but the Nazis did get around to manufacturing history’s heaviest production tank, the Panzer VIII Maus.

The Maus was the biggest operational tank ever manufactured, measuring about 33 feet long, 12 feet wide, 12 feet high, and weighing nearly 200 tons. While normal tanks usually use machine guns as secondary armament, the Maus’ secondary armament was a 75 mm coaxial gun. Its main gun was a 128 mm monster capable of destroying any Allied tank at ranges of up to 2.2 miles. That gun was upgraded and increased at Hitler’s insistence, who thought the 128 mm looked like a pop gun on the Panzer VIII, to a 150 mm cannon.

However, the Maus’ huge size and heavy weight came at a heavy price that made it nearly useless. The tank was too heavy for most bridges, so it had to cross rivers either by wading through fords where available, or driving over the river’s bottom while using a snorkel for ventilation. Even the task of simply getting the Maus moving was a problem, because it was difficult to develop an engine and drive train powerful enough to propel 200 tons of metal on the ground at any appreciable speed, yet small enough to fit inside the tank. In the end, the maximum speed achieved during trials was 8 m.p.h. on hard surfaces.

Panzer VIIIs were intended to spearhead German attacks by smashing through any opposition and destroying all enemy armor they came across, while remaining invulnerable to damage from any opposing tanks. With 9.4 inches of turret armor, 8 inches of hull front armor, 7 inches of hull side armor, and 6 inches of rear armor, a Maus was quite immune from Allied tanks, whose shells would simply bounce off the behemoth. However, it was built in 1944, and by then the Allies not only had aerial superiority on both the Western and Eastern front, but well nigh complete aerial supremacy over the battlefield. The Maus did not have enough armor up top to protect it from armor piercing bombs or rockets dropped or fired from above.

Ultimately, the Maus was symptomatic of the Nazis’ and Hitler’s irrational obsession with big things and super weapons. That mindset reflected indifference to or inability to understand their relative cost effectiveness compared to other “normal” weapons that could accomplish the same task at a fraction of the cost. Using such weapons instead would have freed up scarce resources for other uses that could have better served the German war effort. Humanity is thus indebted to that Nazi and Hitlerian psychological shortcoming and blind spot.