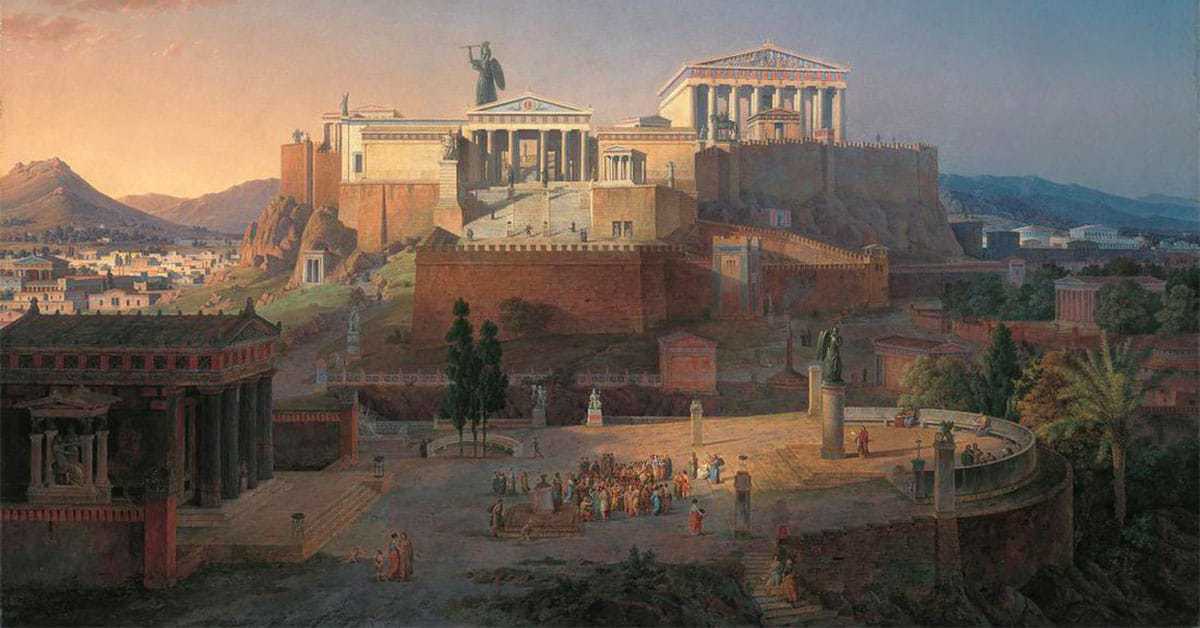 Plato (427 – 347 BC) was the student of Socrates and the teacher of Aristotle, and the trio laid the very foundations of Western philosophy and science. Plato ranks among history’s most influential figures, and for over two millennia has been one of the world’s most widely read and studied philosophers. In addition to his writings, he founded the Western World’s first institution of higher learning, The Academy in Athens.

Plato was born in a wealthy and conservative, even reactionary, family. He was related to two of the “Thirty Tyrants” who overthrew Athenian democracy and instituted a reign of terror after the city’s defeat in the Peloponnesian War. That family influence is reflected in Plato’s political philosophy, which is skeptical of democracy and favors enlightened authoritarianism.

The Thirty Tyrants were in turn overthrown, democracy was restored, and a counter-reaction set in against conservatism and anti-democratic thought, culminating in Socrates’ execution in 399 BC. Many of the Thirty Tyrants had been students of Socrates, as had been the traitorous Alcibiades. From the perspective of pro-democracy Athenians, Socrates was not a harmless old man whose only crime was to ask questions, but a pernicious guru whose teachings catered to rich aristocrats hostile to democracy. Many of Socrates’ students had gone on to commit treason, joining the enemy during wartime in fighting against their city as did Alcibiades, or overthrowing the democratic government and replacing it with a repressive regime that engaged in widespread murder as did the Thirty Tyrants.

When the Athenians looked back at the glory days under Pericles, only three decades past, contrasted them with their reduced circumstances in the aftermath of catastrophic defeat and violent repression, and asked themselves “what went wrong?“, Socrates and his boat rocking were among the answers. Athens became unhealthy for students of Socrates, so Plato left and traveled around the Mediterranean, returning years later, after passions had cooled, and founded The Academy in the 380s BC. There, Plato would spend most of his remaining years teaching and writing.

The origins of Western political philosophy can be traced back to Plato’s writings, particularly the Republic and Laws. In addition to his impact on science, philosophy, politics, and education, Plato greatly influenced spirituality and religion. His impact on Christianity can be seen in the strong influence his philosophy exerted on Saint Augustine of Hippo, early Christianity’s most influential theologian, and one whose writings played an oversized role in shaping that religion and subsequent Western thought.

Among Plato’s innovations was the introduction of dialogue and dialectic forms in philosophical writings. In his books, characters engage in intellectual debates, during the course of which philosophic points are advanced, challenged, shot down, or honed.

Nothing written by Socrates has survived, and virtually all we know of his philosophy has been transmitted through Plato, whose early writings are generally considered to be Plato’s account of Socrates’ life and thought. Plato’s later writings, such as his best-known book, the Republic, are deemed to contain Plato’s own philosophy, as the main characters speak for Plato himself.

The Atlantic – What Made Ancient Athens a City of Genius?

History Hit – How Significant Was the Battle of Salamis?

Mvorganizing – What Was A Helot In Spartan Society?

The Collector – The Ancient Festivals Of Dionysus In Athens: ‘Euhoi Bacchoi’

Getty – A Guide to Aeschylus’s “Persians”

PBS – How Salamis was remembered – Aeshylus’ The Persians

Grin – Why Did the Sicilian Expedition Fail?

Daily History – What Was The Impact Of The Defeat Of The Sicilian Expedition On Athens?