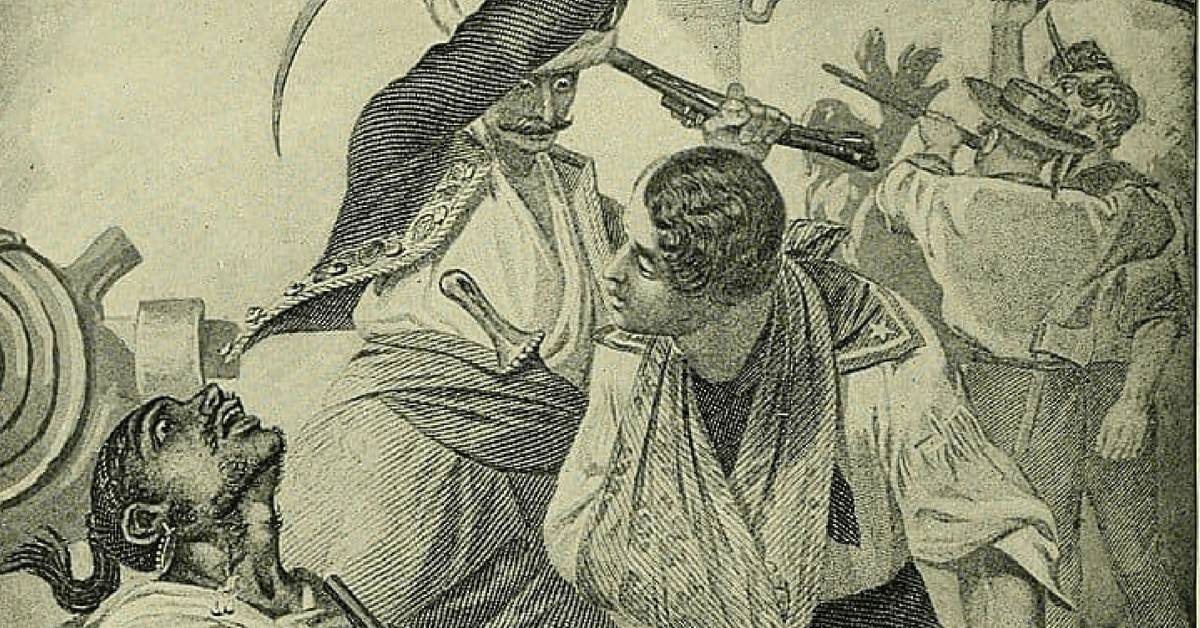 The attack on Derna

In the spring of 1805 former US Consul to Tunis William Eaton was sent to Egypt where the brother of the Pasha of Tripoli, Hamet Karamanli, was living in exile. A plan was formed for an expedition led by Eaton, and manned by mercenary troops, to attack Tripoli in an overland expedition from Alexandria, in order to install Hamet as Pasha, deposing his brother. A force of ten Americans, including Eaton, two navy midshipmen, and seven US Marines contacted Hamet, who raised a force of about 300 Arabs and less than one hundred Christian mercenaries, many from Greece. Accompanied by camels and pack mules, this force marched 500 miles across the desert toward Derna.

The expedition departed Alexandria in early March. Inadequately supplied, by the time the expedition neared the Gulf of Bomba their rations were consumed and the Arab faction, by far the bulk of the little army, was threatening to abandon the operation. Relief was obtained when the brig of war USS Argus met the expedition at the Gulf of Bomba and transferred rations ashore. Argus also arranged to support the proposed attack on Derna with shore bombardment, and its captain, Isaac Hull, promised Eaton that he would attempt to arrange further naval gunfire support from other ships from the Tripoli squadron.

On April 27 three American ships, Argus, Nautilus, and Hornet, bombarded the defenses manned by Yusuf Karamanli’s forces and they were attacked by land by Eaton’s expedition. The city of Derna was captured in the assault, and for the first time the flag of the United States was raised over a captured foreign city. Hamet Karamanli declared himself the true Pasha but his brother disagreed and twice attempted to retake the city, failing in both attempts. At the end of May USS Essex arrived at Tripoli carrying Tobias Lear, who entered into negotiations with Yusuf to end the war. The reinforced American squadron carried with it the threat of further actions.

Eaton had signed an agreement with Hamet in which Hamet would become Pasha, which Lear renounced, and Yusuf was allowed to remain the ruler of Tripoli. The Americans provided Hamet with a small sum for his troubles and leaned on Yusuf to install his brother as the head of state of Derna, to which Yusuf acquiesced. He was also persuaded to release the prisoners he held, including the former crew of Philadelphia, in return for $60,000 dollars. Finally he agreed to renounce tribute from the United States and cease the practice of capturing merchant ships from the United States and European nations. He was still free to raid on the other Barbary States.

The American squadron, then under Commodore Rodgers due to Barron becoming ill, immediately sailed to Tunis and forced a similar agreement from the Bey. With the accession of Tunis, the First Barbary War was over. The naval operations of the war had been noted by the European naval powers and the professionalism of American officers had impressed those of Great Britain, France, and Spain. During the ensuing Napoleonic Wars and British blockade of the French fleets in their home ports, the Barbary pirates returned to their raiding, though not against American ships until the War of 1812 began, and the US Navy remained largely preoccupied with war with Great Britain.

During the Napoleonic Wars and the War of 1812 the Barbary States returned to their raiding on ships of any Christian nation, and the Americans and Europeans had few assets at hand with which to stop them. After the end of the War of 1812 the United States sent another squadron to the region. On May 20, 1815, after the action was sanctioned by Congress earlier that spring, a squadron including three heavy frigates (one of which was the former HMS Macedonian, captured by Stephen Decatur during the War of 1812) and supporting sloops and brigs sailed for the Mediterranean under Commodore Decatur. After entering the Mediterranean the squadron captured two Algerian ships.

Stopping first at Algiers, Decatur demanded the Bey enter into a new treaty with the United States, backed by the guns of the squadron. The Bey acquiesced to the Americans and was forced to pay damages of $10,000 for which he received his two ships and their crews which had been taken by the Americans. Decatur extracted similar agreements from the remaining Barbary States, and informed them that American naval presence would remain in the Mediterranean to enforce the agreements. Once Decatur’s force was out of sight, the Bey of Algiers once again ignored the treaty, which had been forwarded to the Congress of Vienna and ratified.

In response to the continuing piracy of Algiers a British squadron of ships of the line under Lord Exmouth (Edward Pellew) was dispatched to Tunis and Tripoli, both of which quickly endorsed the treaty and renounced the practice of seizing ships of Christian nations. The squadron then went to Algiers where the Bey was reluctant to accept it. After he did sign it the Algerians under his command massacred fishermen from Sardinia, Corsica, and Sicily, killing more than 200. The islands from which the victims came were under the protection of the British, and Exmouth returned to Algiers with his squadron.

When Exmouth returned he brought with him a much larger squadron of British ships, supported by ships of the Dutch Navy. On August 27, 1816 the combined fleet unleashed a bombardment of the city of Algiers, its defenses, the harbor defenses, and the ships lying in the harbor. The bombardment was accurate and the heavy guns of the ships of the line wrought much destruction. For just under nine hours the fleet pounded the Algerians, who fought back, inflicting heavy casualties in some ships. The bombardment ceased only because the ships of the British fleet had expended all of their gunpowder, but Exmouth decided to bluff.

The following day the Bey was informed that he must accept the terms of the preceding agreement or the bombardment would resume, and continue until he did. Unaware that the British were out of ammunition the Bey agreed to the terms. He also freed the three thousand Christian slaves he was holding, and agreed to end the practice of enslaving Europeans. The bombardment of Algiers brought an end to the Barbary wars, and the Barbary States themselves were soon to become targets during the colonization of Africa. The depredations of the Barbary pirates were over.

“The Wars of the Barbary Pirates”, by Gregory Fremont-Barnes, 2006

“Six Frigates: The Epic History of the Founding of the US Navy”, by Ian Tolle, 2006

“Ready to Hazard: A Biography of Commodore William Bainbridge”, by David F. Long