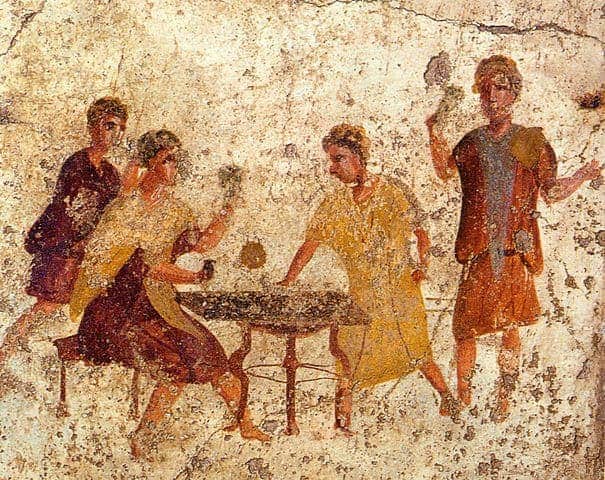 The House of the Bicentenary in Herculaneum was the home of Gaius Petronius Stephanus and his wife, Calantonia Themis. It was also the setting for a legal drama that spanned years and was never fully resolved. The central character in this drama was a teenage girl called Justa. Her story reads like a soap opera yet all of it is true. It can be found in the court records of Herculaneum that were buried and preserved in 79AD.

Justa’s mother was called Vitalis, and she was a slave of Petronius Stephanus. In 62AD, Justa was born, and around the same time, Petronius Stephanus allowed Vitalis her freedom. Although it was proper to record manumission formally, in reality, matters were more relaxed and Stephanus, simply presented Vitalis with a paper declaring her free in front of witnesses. Vitalis did not leave the house of her former master. She continued to live in and meanwhile, Justa was brought up ‘like a daughter’ by Stephanus and his wife.

However, after about ten years relations soured. Vitalis and Calatonia began to argue, and Vitalis decided to move out – helped by the fact that by this time she was prosperous in her own right. She wanted to take Justa with her but her former master and mistress wished to keep the little girl. So, Vitalis brought a lawsuit against them. The matter was settled out of court and Justa was finally reunited with her mother- after Vitalis reimbursed her former owners for their upkeep of the child.

There was, however, no happily ever after for Justa and Vitalis. Not long afterward, Vitalis died- leaving Justa, the heir to a considerable fortune. Calatonia who had recently been widowed sensed an opportunity. She filed another lawsuit to recover Justa, claiming that the child had been born before her mother’s manumission, making her a slave. All Calatonia needed was for a court to declare Justa, a slave- and she regained the child and secured a fortune.

The matter was so complex it ended up referred to Rome in 75AD. Witnesses were called and depositions amassed. One of Stephanus’s most trusted freedmen, his bailiff Telesforus testified that Justa was born after Vitalis’s manumission. It was Telesforus who had negotiated Justa’s return to her mother and his close interest in the child suggests she could have been his daughter. In any event, his testimony did little good. The case dragged on into 76AD and beyond as the court continued to consider the evidence. Justa’s status had still not been decided by the time Vesuvius erupted meaning she probably died in a state of limbo.

Meanwhile, in Pompeii, a local merchant of fish sauce was putting his wealth to good use.

Aulus Umbricius Scarus was no freedman. His trio of names suggests he was a Roman freeborn citizen, a fact that is confirmed by a family tomb epitaph, which confirms he was of the Menenian voting tribe. However, it does seem that Aulus was a new man; one whose fortune was newly made- and in trade to boot. For Aulus Umbricius Scarus was Pompeii’s foremost producer of garum or fish sauce. Over fifty urcei- the small, one-handled containers used for the condiment have been found in Pompeii bearing Scarus’s stamp. It is estimated that around 30% of Campania’s fish sauce came from his factories, which were known to export as far as the south of France.

Scarus made a fortune from his business, as can be seen in his house. Unlike the homes of some of Pompeii’s citizens, there is no doubting whose it belongs to. The house overlooks what was the coastline. Set over three stories, it was extremely luxurious with a colonnaded garden, its own bath suite and no less than three atria. It is the décor in one of these atria that advertises the identity of the owner. The mosaic around the room’s impluvium was adorned with four larger-than-life black and white urcei, each inscribed with Scarus’s name and advertising the excellence of his garum.

Each mosaic urcei boasted of the merits of a particular brand of Scarus’s fish sauce. Two related to lower grade garum while the other two boasted about Scarus’s liquamen- the highest grade of the sauce. “The flower of Scarus’s mackerel garum from the factory of Scarus, “announced the lettering. It may have seemed rather crass to use your home to advertise your business so blatantly- certainly to some of Pompeii’s elite. However, it also made good sense. After all, the atrium was where Scarus would meet his business associates. May as well let the décor do some of the talking for him.

In fact, Scarus’s urcei mosaics showed he was proud of his achievements, whatever the Pompeian elite might think. However, that did not mean that he did not want better for the next generation. While there is no evidence that Scarus himself courted public life, he certainly used his wealth to launch his son’s political career. Sadly, the young Scarus predeceased his father. However, the epitaph on his tomb reveals that while alive, he did his father proud.

“To Aulus Umbricius Scarus, son of Aulus, of the Menenian tribe, duumvir with judicial power.” The plaque begins, “The town councilors voted for him a site for his monument, 2000 sesterces for his funeral and an equestrian statue to be set up in the forum. His father Scarus dedicated this to his son.” Setting up monuments and paying for the funeral did not just honor the dead Scarus junior. It was also a way of courting the wealthy and still living Scarus senior. Aulus Umbricius Scarus may not have had political ambitions of his own. However, the city of Pompeii could still use his cash- newly minted or not.

Our last Pompeian was similarly unashamed of their life in trade.