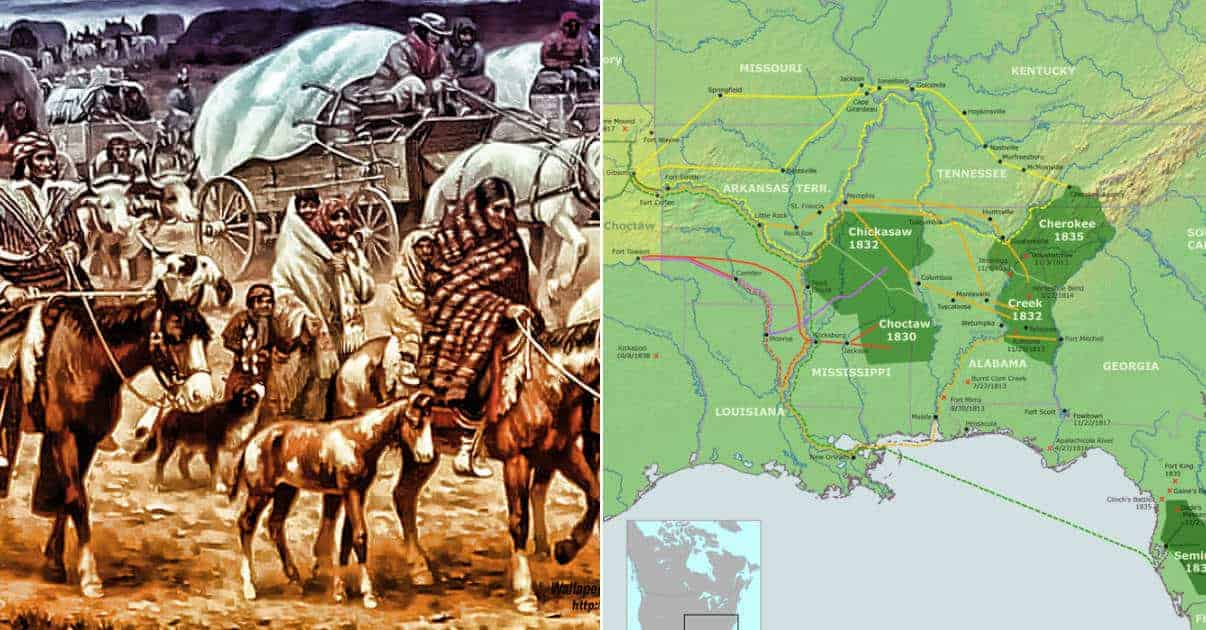 In American history the Trail of Tears and the forceful removal of the eastern tribes is considered an act of genocide by some, an unfortunate incident by others, and it is one of the least understood actions in American history. Although the term is usually referred to only in the context of the Cherokee removal, it encompasses a great deal more than the relocation of that tribe. In many instances Indian leadership was complicit with and profited from the removal. In others it was forcibly opposed by the Indians, leading to even greater suffering by their people.

Andrew Jackson is blamed by both sides which condemn the actions under the Indian Removal Act, but he is just one of several Presidents who directed the removal of the Indians under the Act’s provisions. Martin Van Buren and John Quincy Adams were both involved as well. Later other Presidents would order other relocations. Adams refused to use American Army troops to enforce federal law in Georgia and Alabama, allowing both states to initiate their own seizure of lands occupied by the Indians. Both Adams and Van Buren ( and to an extent Jackson) felt that the use of federal troops would lead to conflict with state militia and possible civil war, and none wanted to assume that risk.

The American public and political groups argued strongly against the Indian Removal Act, especially those of the Northeastern states and the newer states of the west, such as Ohio and Indiana. New England opposition was especially strong. Daniel Webster and Henry Clay, political adversaries in other areas, opposed the removal. In Tennessee Congressman David Crockett risked his political career by arguing forcibly against the act, angering the President, a fellow Tennesseean. Crockett had been seriously considered a possible Presidential candidate until the Jackson Machine in Tennessee ensured he wouldn’t be re-elected to Congress following his opposition. Defeated, Crockett went to Texas. Before the Cherokee removal began, he was dead at the Alamo.

By the end of the Jackson Administration in 1837, approximately 46,000 members of the eastern tribes had been forcibly or voluntarily removed to the Indian Territory west of the Mississippi. This was just under half of all the American Indians who were eventually removed under the terms of the Indian Removal Act and the ensuing treaties with the tribes involved. The Cherokee removal had yet to begin when Jackson left office. Under Jackson, 25 million acres of land, primarily located in the slave states of the south, were opened to planters and other settlers.

The Impact of the Indian Removal Act

There are those in Cherokee reservations and nearby locales who refuse to accept the United States $20 bill as legal tender, citing Jackson’s portrait upon it as the reason. The Indian Removal Act is routinely referred to as a shameful episode in American history, an attempted genocide. This image which is encouraged by supporters of the American Indian as a noble and civilized race with its own cultures and traditions routinely and ignorantly destroyed by the incursion of the whites. Many argue that the land belonged to the Indians and the white’s simply stole it from them. This despite the fact they also claimed the Indians had no concept of land ownership, living communally.

This argument is simplistic and far from true. In every instance treaties were negotiated with the tribal leaders, many of whom enriched themselves through them. Andrew Jackson viewed the Indians as uneducated children in many instances, who needed to be cared for. In this he was supported by many military and political leaders with experience dealing with the Native Americans. Jackson’s view that the Indian way-of-life was incompatible with white settlement was likely correct, as the history of America’s settlement to that point indicates.

Many of the tribal members of the relocated tribes remained behind, successfully assimilating with the white settlers, and becoming successful planters and businessmen in the American states. Others became political figures. One of the great ironies of the removal was that once in Oklahoma the Indians of all the relocated tribes rapidly adopted many of the features which would have allowed them to remain in the east had they adopted them there. These include individual ownership of land and American citizenship.

The numbers of those who died during the western migration of the tribes is routinely inflated by the re-writers of history determined to depict the American settlement of the continent as a genocide on a par with the Nazi led holocaust in Europe. This is a disservice to history. The sufferings of the Indians who moved west on the many Trails of Tears were real and severe, a bitter chapter of American history and a wholly regrettable one. But the relocation was an unavoidable fact of the times were the Indians to survive, given the determination of many not to assume the reality that their way of life was incompatible with their neighbors.

The horrors of the Trails of Tears were the responsibility of the American leadership that ordained them and the Indian leadership who were irresponsible to their people. Incompetent leadership on both sides, including graft and incompetence, coupled with horrendous weather and rampant disease, led to the suffering of the Indians as they moved to the west. But consider, when the Cherokee began their move west their tribal population stood at less than 20 thousand. Today there are more than 316,000 enrolled members of the Cherokee Nation in the United States.

“Georgia and the Conversation over Indian Removal”, by Michael Morris, Georgia Historical Quarterly, 2007

“Andrew Jackson and his Indian Wars”, by Robert Remini, 2001

“Cherokee Removal: Before and After”, by William Anderson, 1991