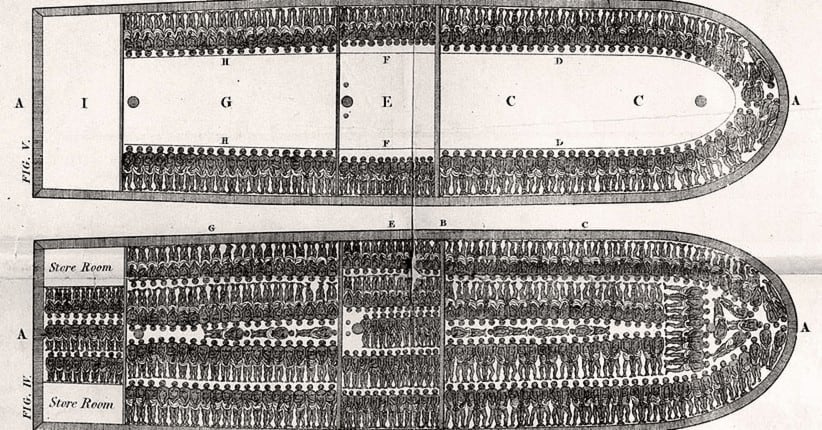 The slaves carried in their thousands on board the slave ships that crossed the Atlantic were to be sold to plantation owners in America. This meant that they had to arrive healthy, strong and ready to get to work. Or, at least as healthy and strong as could be expected after a harrowing journey. It was for this reason that the slaves were fed daily. The food was, generally speaking, nutritious, even if it was far from tasty.

Beans, dry bread and salted meats were all staples on board the slave ships, plus the crew would also be required to keep the slaves well-hydrated. Losing a slave to thirst or hunger could lead to a crew member being flogged themselves. Ship captains would try and find a balance between keeping their precious human cargo alive and healthy and saving as much money as possible on supplies. For this reason, slaves were often fed the bare minimum. On a French-owned boat, this would usually be a simple stew of oats and maybe even some dried turtle meat, while British crews tended to give their captors small, fatty meals as well as generous rations of water.

However, slaves would often be simply too sick to eat. Or, in many cases, they would refuse the food offered to them. Going in hunger strike was often the only act of resistance open to a slave and many saw being in control of their own bodies as a small victory against their captors. To get around this, crew members would use a special tool called a â€˜speculum oris’. This long, thin piece of metal would open the throat up, allowing them to get thin, semi-nutritious gruel down a slave’s throat while other men held him down and still.

Olaudah Equiano, who provided one of the most harrowing first-hand testimonies from the height of the slave trade, revealed that forced feeding was commonplace on slave ships. Indeed, when he himself wanted just to be left to die, he was forced to eat by his captors. He recalled: “I became so sick and low that I was not able to eat, nor had I the least desire to taste anything. I now wished for the last friend, death, to relieve me; but soon, to my grief, two of the white men offered me eatables; and on my refusing to eat, one of them held me fast by the hands and laid me across I think the windlass, and tied my feet, while the other flogged me severely.”

Slaves often went overboard – but usually due to despair

On November 29, 1781, the crew of the slave ship Zong realised their supplies of drinking water were running perilously low. The ship, owned by a syndicate based in Liverpool, was taking around 400 slaves from Africa across the Atlantic. By the time it reached the coast of Jamaica, the situation was desperate. However, an easy solution was reached: the crew simply unchained 140 slaves and threw them overboard. The dead included 54 women and children. After all, if the slaves – their property – died at sea rather than on land or from â€˜natural causes’, the ship’s owners could claim them on their insurance policy.

The company duly filed its insurance claim for the value of around 140 slaves. The court case caused outrage, and indeed it was instrumental in winning support for what became the Slave Trade Act of 1788, the first British legislation aimed at regulating the cruel trade. And, while, the insurers refused to pay out and the judge backed their stance, he still noted that there were circumstances in which it was acceptable for slave ship captains to order slaves be thrown overboard to their certain deaths.

For reasons of simple economics rather than humanity, captains were reluctant to throw slaves overboard during the â€˜middle passage’. Of course, slaves who died during the journey were thrown over the side almost as soon as they were found. However, only in extreme cases did living slaves meet the same fate. Captains were under pressure to arrive with as many â€˜heads’ as possible and so would usually resort to other measures, including torture and other extreme punishments, if they caught a slave trying to escape or incite a rebellion.

That’s not to say that hardly any slaves ended up in the cold waters of the Atlantic. Tragically, many did indeed drown. However, in many cases, this was an act of desperation and defiance, with both slave men and women preferring to kill themselves than await their fate in the Americas. Slave ship captain John Newton recalled: “When we were putting the slaves down in the evening, one that was sick jumped overboard. Got him in again but he died immediately, between his weakness and the salt water he swallowed.”

Most large slave ships had their crew on stand-by to â€˜rescue’ slaves who threw themselves overboard and some even fitted special â€˜suicide nets’ to prevent jumpers – again, motivated by greed rather than any sense of humanity. To get around this, some slaves even asked their fellow captives to strange them. In cases of suicide, some crews would decapitate the corpses of slaves, telling the remaining captives that they too would go to the afterlife with no head if they chose the â€˜easy way out’.

After many weeks at sea, the captains and crews of slave ships were usually heartened to see the coast of America. Indeed, some histories of the â€˜middle passage’ reveal that, in some cases, conditions on the slave ships improved markedly during the final stage of the journey, with the slaves treated better for their last few days on board.

But, of course, if slave ship captains did order their crews to treat the slaves better, it was not out of compassion or remorse for the harsh treatment they were forced to endure earlier in the journey. Rather, the captains were businessmen and under pressure to deliver slaves who looked strong and healthy. After all, some would be sold at auction and others would be put to work on the plantations almost right away. So, in the final few days of the voyage, food rations would be increased significantly. The shackles might even be loosened or taken off completely – again, with the slave markets in mind, with the captains wanting their â€˜cargo’ to look as fresh and injury-free as possible.

While there are some accounts of â€˜parties’ aboard slave ships as they got close to their final destination, this would have been yet another act of humiliation for the slaves. Men, and especially women, would be forced to dress up in costumes and dance on the deck for the amusement of the captain and his crew, with a sailor armed with a whip watching over them to ensure they danced with sufficient enthusiasm.

Once they landed, the horrors were often only just beginning for the slaves. Many had no idea what fate awaited them – indeed, according to Equiano, some feared they were to be eaten. He recalls: “They told us we were not to be eaten, but to work, and were soon to go on land, where we should see many of our country people. This report eased us much; and sure enough, soon after we were landed, there came to us Africans of all languages. We were conducted immediately to the merchant’s yard, where we were all pent up together like so many sheep in a fold.” From there, men, women and children were purchased just like cattle and sent off to a life in servitude.

“A History of Africa: The Middle Passage.” BBC World Service.