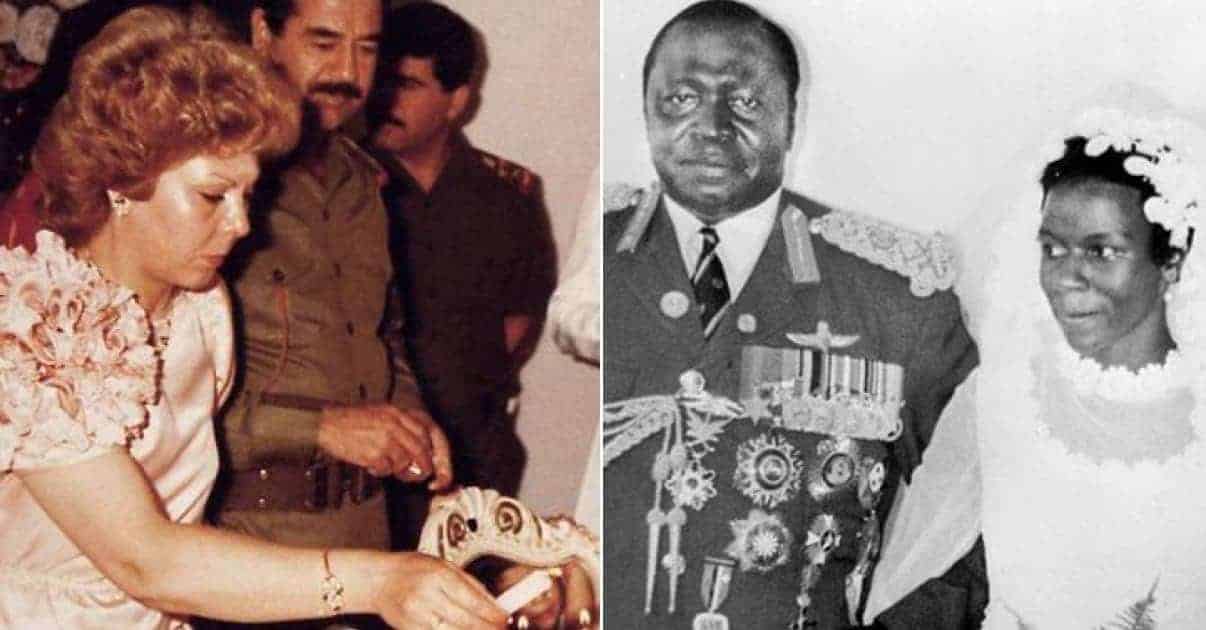 Wife of the infamous SS leader Heinrich Himmler, Margarete Himmler started life on a very different path. Given her husband Heinrich directed the killings of countless people, it is ironic that Margarete initially trained as a nurse to help save lives in World War One. When the war ended, she moved to the German Red Cross hospital. Thanks to funding by her father, she was also able to direct a private nursing clinic. How you then end up married to one of the world’s most notorious killers is certainly a baffling question to tackle!

Margarete first met Heinrich in 1927 at one of his lecture tours. Owing to her blonde hair and blue eyes, Heinrich is said to have fallen in love immediately; they married one year later in July. Heinrich was worried to introduce Margarete to his Catholic parents – not only because he was seven years older than her but because she had been previously married and was a Protestant. Though she was eventually accepted, his family generally kept their distance. Margarete then gave birth to their only child, Gudrun, on the 8th August 1929.

Margarete was certainly not an innocent bystander in her husband’s doings. She joined the Nazi Party in 1928 and frequently hosted meetings with the wives of senior SS leaders. Despite this, she was generally disliked and during the Nuremberg Rally of 1938, she conflicted with these women and as a group, they refused to take directions from her. Further, once World War Two began, Margarete supervised German Red Cross hospitals but while on a trip to Poland wrote in a private diary that “this Jewish rabble… don’t look like human beings… it’s an incredible job trying to create order.”

In April 1945, Margarete and Heinrich Himmler saw one another for the last time before his death. They had separated years earlier, and in 1941 Margarete learned that Heinrich had secretly been engaged in a relationship with his secretary. He went on to father two children with her.

Once the war ended, several investigations were launched into Margarete to assess how likely it is that she knew of her husband’s business. She claimed to have no idea and sought to be de-nazified and held unaccountable for the crimes of her husband. Eventually, after years of debate, in 1953 she was classified as a beneficiary of the Nazi regime and sentenced to thirty days’ punitive work. With this classification, she also lost her right to vote, and the right to a pension.

Sajida Khairallah Talfah, born June 1937 in Tikrit Iraq, is most famously known for being one of Saddam Hussein’s wife from May 1963 until his death. Hussein, President of Iraq from 16 July 1979 until the 9th April 2003, was executed by hanging on 30th December 2006 aged 69. His government killed hundreds of thousands of Iraqis.

Sajida Talfah did not have to ‘meet’ Saddam Hussein; she was, in fact, his cousin. Her father, Khairallah Talfah, was the maternal uncle of Saddam Hussein. There are many rumours flying around about their marriage and nobody seems to know the precise answer. Some suggest they were married as a result of an arranged wedding at a very young age – he was five-years-old and she was seven. Other resources suggest the marriage may have occurred far later and that before marrying Saddam, she worked as a primary school teacher. These sources put the date of their marriage at either 1958 or 1963. Either way, the pair had five children together, the first born in 1964.

Now, although they never got divorced, her husband, Saddam Hussein, is thought to have married another woman named Samira Shahbandar in 1986. Rumour has it that in a fit of rage, the man who introduced and arranged meetings between Saddam to Samir, was murdered on the request of Sajida; but this has never been proven.

It is not known where exactly Sajida hid when the bombing began in Baghdad in 2003, but rumour has it she fled to Qatar with her daughter while her sons fled to Jordan. In 2004, Sajida hired a whole host of lawyers to defend her husband while he was on trial for war crimes. This was dramatically cut to only one Iraqi lawyer in 2005. Sajida herself was not innocent in the turmoil – in 2006, Muwaffaq al-Rubaie, Iraq’s national security advisor, announced that Sajida and her daughter were on the government’s most wanted list as a result of financing Sunni Muslim insurgents under Saddam’s regime. It is not known what eventually happened to Sajida. In 2015, her family denied rumours that she had died, but her whereabouts remain unknown; it is thought she is still hiding in Qatar.

Ivan IV Vasilyevich, more commonly known as ‘Ivan the Terrible’, had more than five different wives throughout his life (1530-1584). His first, and longest marriage, was a lady named Anastasia Romanovna. Born in 1530, Anastasia was the daughter of a Boyar named Roman Yurievich Zakharyin-Yuriev. His name later provided the foundation for the Romanov dynasty.

Anastasia first met Ivan in the Kremlin at an event specifically designed to help him find the best bride possible. Talk about romantic! That said, all of the daughters of noble families in Russia were invited and it is alleged there were anywhere between 500 and 1,500 women to choose from. Still, hardly a Romeo and Juliet-style tale. They officially married on the 3rd February 1547 at the Cathedral of the Annunciation, located on the southwest side of the Moscow Kremlin in Russia.

With a nickname like ‘Ivan the Terrible’, what did she expect?! I mean, obviously she did not know this would become his legacy, but the warning signs were there from the outset. Anastasia went on to provide six children for Ivan, but apparently, that was not good enough. In 1581, years after Anastasia’s own death, Ivan the Terrible killed the heir and second son that Anastasia had provided him. Striking him repeatedly with a sceptre, his father accused him of inciting rebellion and punished him accordingly. It is believed, however, he regretted this move and immediately threw himself at his son and attempted to stop the bleeding. This was to no avail, he died a few days later on the 19th November 1581.

Mysterious circumstances surround poor Anastasia’s death. In 1560 she fell ill and soon died. Ivan suspected that Anastasia had been poisoned; he consequently tortured and executed some of those he believed responsible for her death. Though there was no evidence of a crime at the time, further archaeological and forensic research has revealed unusually high levels of mercury in Anastasia’s hair. While that may indict poison, mercury was also used as a medicine during this era and thus it is hard to decipher what precisely happened; we can only speculate.

Osama Bin Laden, the founder of Al-Qaeda, was responsible for the 9/11 attacks in New York City that resulted in the untimely death of nearly 3,000 people in 2001. Between his five, possibly six wives, he fathered between twenty and twenty-six children. His first marriage was at the age of seventeen to his Syrian cousin, the daughter of his mother’s brother. However, after several more marriages (four, possibly five – though it is thought the fifth marriage was annulled within days), aged forty-four, Bin Laden decided he wanted yet another spouse.

According to one of his former aides, Bin Laden rang him up and requested a new spouse that “must be pious, dutiful, young, well-mannered, from a decent family, but above all patient.” His aide went on to match Bin Laden with Amal Ahmed al-Sadah, a seventeen-year-old Yemeni girl from Ibb whose father was a civil servant. Weeks after the proposal, Bin Laden transferred a $5,000 dowry to her family. The pair then married in 2000 in the city of Kandahar in Afghanistan.

While married, Amal initially she lived with his other wives in a Taliban stronghold location. However, after the attack on September 11th, she fled back to Yemen with her daughter Safiyah. After sufficient time had passed, she was able to re-join her husband and spent most of her time hiding in the same room in the compound where he died. Speaking of which, during the US raid that resulted in Bin Laden’s death, Amal was shot in the leg. Though US special forces wanted to take her to question her about his life, their plan was allegedly dashed when one of the Black Hawk helicopters crashed as there was no room for his wife in any aircrafts.

After Bin Laden’s death, during negotiations between Yemen, Saudi, and Pakistan, Amal Ahmed Al-Sadah lived with Bin Laden’s other widows and children in a safe house in Islamabad. Eventually, Amal Ahmed al-Sadah was deported to Saudi Arabia rather than her native country of Yemen. Officials, as well as members of her family, feared that she may be targeted by al-Qaeda militants or become a focal point for bin Laden’s followers to rally around. Little is known of her whereabouts today, but it is assumed she is still alive and in hiding.

This woman is, by far, one of the most recognizable on this list. Best known as Hitler’s secret girlfriend, Eva Braun also had an illustrious background. She trained as a photographer and as an occasional model/lab assistant at the photography studio of Heinrich Hoffman. It was here, aged seventeen, that she first met Hitler – twenty-three years her senior. They did not start meeting regularly until two years later. During their early relationship, Eva Braun attempted suicide twice. The first attempt, in August 1932, saw Eva shoot herself in the chest with her father’s pistol. The second, in May 1935, involved an abundance of sleeping pills.

Hitler treated her to a luxurious life. Though it may not have necessarily been as public as she would have liked, he did give her a lot of what she wanted materially. The couple spent a lot of time in ‘The Berghof’, Hitler’s home in the Obersalzberg of the Bavarian Alps. When the Second World War began, Eva sought safety here, and the place became one of the most well-known headquarters that Hitler had during the War.

Though today many conceive of Eva as Adolf Hitler’s part-time mistress, she was in fact married to the notorious Nazi leader for around forty hours. Why only forty hours? Well, their marriage took place within the Führerbunker, an air-raid shelter located in Berlin, Germany on the 29th of April 1945. “So what”? I hear you ask. Less than two days later, after saying farewell to friends and staff, the pair committed suicide together. Eva is believed to have bitten into a capsule of cyanide while her lover, Hitler, died from a self-inflicted gunshot to the head.

Part of the misconception surrounding their relationship stems from the hidden nature of it. In general, she was kept away from the limelight. Rumour has it this was because Hitler felt being single made him more likeable and increased his popularity among German women; a demographic he was keen to keep happy. Consequently, despite being a key icon in Hitler’s inner circle, Eva did not even attend public events with him until mid-1944, less than one year before her death. Their relationship was so secret in fact, that the German public only became aware of it after their deaths.