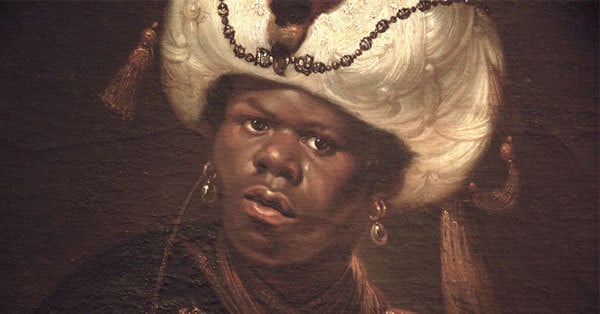 A Musician Slave Changed Fashion, Music, and Dining in the Middle Ages

Abul-Hasan Ali Ibn Nafi, also known as Ziryab, was one of the greatest innovators of his era yet his name is forgotten by all but the most fanatical lovers of history. He was a true Renaissance Man but lived hundreds of years before the cultural growth of that period. Ziryab was born in either Baghdad or Mosul in 789 AD and was probably African or African-Arab. According to several Arab historians, he was a freed slave, and his family had served Al-Mahdi, the caliph of the Abbasid Dynasty, until Al-Mahdi’s death in 785.

He was given the nickname ‘Ziryab,’ which means blackbird, because of the color of his skin and his melodious voice. He had exceptional knowledge in a variety of fields including geography, astrology, botany and even fashion amongst other things. Ziryab was centuries ahead of his time and was clearly head and shoulders above his contemporaries.

Ziryab’s main talent was as a musician, and he trained under the tutelage of an exceptional teacher called Ishaq al-Mawsili. At that time, Baghdad was the music, art and cultural center of the Muslim world, so it’s likely that if Ziryab wasn’t born there, he moved there at some stage. The Caliph, Harun al-Rashid, was a renowned lover of music and regularly brought musicians and singers to his palace to entertain his guests. Ishaq was the caliph’s chief musician and trained a variety of students including Ziryab.

As well as being highly intelligent, Ziryab had an extraordinary ‘ear’ for music and dutifully learned the music of his teacher outside of his lessons. Ishaq’s music was supposedly so complex that even experts found it extremely difficult to master yet Ziryab reportedly learned it relatively easily. In fact, Ishaq himself was unaware of just how good a musician Ziryab was until the caliph asked to hear the young maestro. There is a suggestion that the performance in front of the caliph was so good that his jealous teacher told him to leave the city. In reality, Ziryab probably left the city of his own accord in around 813.

In 822, Ziryab moved to Cordoba, Spain at the court of Caliph Abd-Al-Rahman II. He opened a music school and gained fame for his innovative teaching methods. For example, he introduced a number of tests for students. One involved placing pieces of wood in a student’s jaw to keep their mouth open; the goal was to improve his/her vocal capacity.

Ziryab is credited with bringing the lute to Europe, and he improved the instrument by adding a fifth bass string, and he used a quill or an eagle’s beak rather than a wooden pick. According to one historian, Ziryab made the music seem like magic as he enchanted the court of the caliph at Cordoba. An atmosphere of delight and poetry surrounded him as he created his compositions during the night with the help of two assistants who played the lute. According to Ziryab, the strings of the lute had symbolic meaning. He said the first four strings represented the bitterness of temper, the dark moods, blood, and coolness while the fifth string symbolized the soul.

Another innovation was to substitute the singing system of Medina with that of Iraq. Overall, he helped teach harmony and composition, and his music school developed even further over the next few centuries. As well as revolutionizing music in Andalusia, Ziryab knew approximately 1,000 songs by heart due to his incredible memory. While in Cordoba, Ziryab introduced new standards of excellence in a variety of other fields.

If you hate fashion magazines and their insistence on changing clothes according to ‘season,’ you can blame Ziryab. Before his arrival in Europe, the norm involved changing wardrobes twice a year. Ziryab started a trend by changing outfits according to the season and the weather which meant a total of four different wardrobes. As well as spreading the idea of wearing more colorful clothes, Ziryab introduced the use of salt in the laundry to make clothes even cleaner.

Not content with changing the way Europeans wore and washed clothes, Ziryab also introduced a variety of new hairstyles to replace the standard which involved long hair divided by a stripe in the center. He cut his hair with the bangs straight across his forehead and down to the eyebrows. Also, he advocated the use of salt and fragrant oils to improve the condition of the hair. There is also a suggestion that he opened beauty parlors for the women of Cordoba, but there is little evidence to back it up.

You can also thank Ziryab for smelling good because he popularized the use of perfumes and deodorants and persuaded the people of Cordoba to bathe twice a day; an unheard of level of cleanliness which unquestionably reduced disease. He even created a cosmetology school and introduced the practice of regular shaving amongst men and eyebrow care amongst women. There are also claims that he invented a form of toothpaste which became popular in the Islamic world. The ingredients are unknown but reports state that it was not only functional but also had a pleasant taste.

As well as improving the way people looked and smelled, Ziryab focused on adding delicious new cuisine. He introduced new vegetables including asparagus and came up with the idea for a three-course meal which consisted of soup, a main course, and dessert. He also invented his own dishes, some of which are still eaten in parts of Spain and Algeria. The multi-course custom quickly spread across the Iberian Peninsula and then the rest of Europe and is still widely used today.

Before his arrival, Europeans drank from metal vessels, but Ziryab introduced crystal containers which were far more effective than metal. There are reports of him cutting crystal goblets which support this claim. Before his innovations, meals were served on platters on bare tables as per the Roman tradition. Ziryab changed all of this as dinners became a grand occasion with fancy table setting, additional courses, and fine drinking goblets.

A Man of Science

On top of everything else, Ziryab loved learning and was a scholar in several fields including astronomy, geography, and medicine. His debating skill was known across the Islamic world as its aristocracy journeyed to Spain simply to have the privilege of debating with him. Ziryab sought to extend his learning by bringing in Jewish doctors from North Africa and learned men from India who popularized the game of chess in Europe.

Ziryab quickly became a favorite of Abd ar-Rahman II, the Emir of Cordoba, and was one of his closest companions by all accounts. The prince gave him a monthly salary of 200 gold dinars and often asked for his advice on political matters. Ziryab was one of the most revered and beloved scholars of his generation and was held up as an example of how such an individual should act.

Details surrounding his death are sketchy, but it seems likely that he died of natural causes in 857 at the age of 68. He left behind eight sons and two daughters, and at least five of his children became musicians of great renown. Ziryab completely revolutionized the court of Cordoba and introduced a number of innovations in a variety of fields that stood the test of time.

Although his name is practically unknown in European circles, his deeds are well known in the Muslim world. Indeed, there are numerous streets, hotels, clubs and cafés named after him in various Muslim countries. As well as improving fashion, cuisine, and hygiene, his contributions to the world of music are incredible. He was a true genius and visionary and laid the groundwork for classic Spanish music.