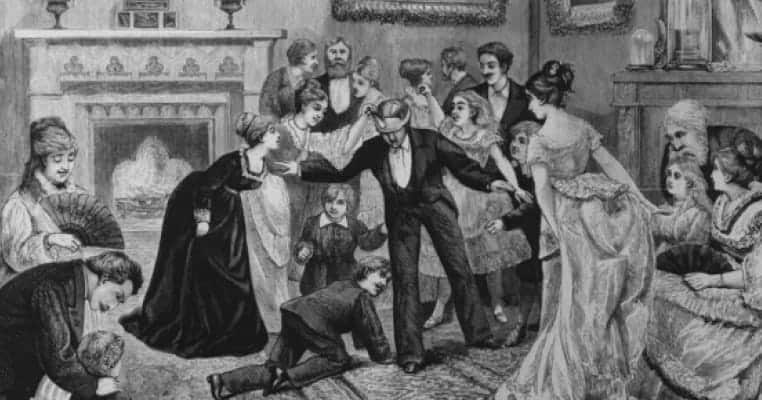 This was a parlor game that became a Christmas tradition during the Victorian Era. In England, Christmas Eve is spent doing festive and fun parties with friends, Christmas Day is usually spent visiting family and eating dinner, and “boxing day” is the day after Christmas, where everyone unwraps and enjoys their presents. This game was usually played on Christmas Eve, especially among the young 20-sometimes who were going to parties with other single people.

A leader was chosen to hold a box, and everyone playing the game had to take off either a piece of jewelry, a watch, a necktie, etc. and forfeit it in the box. The leader would pull the objects out at random, and dare the owner to do something in order to get it back. Many of these dares were usually over-the-top, like requiring a man to full-on make out with at least five women before he could get his watch back. If he said “no”, then the leader of the game got to keep his watch. Of course, playing this game was risky, and it probably meant some kids lost their parent’s family heirlooms. It’s probably best that no one plays this anymore.

6. “The Swinging Shoe” was pretty dangerous.

One person ties a rope around a heavy leather shoe, and then starts to swing it around in a circle around them. The other players have to jump as the shoe is coming towards them. This is kind of like the elementary school game “snake in the grass”, which is usually played with just a jump rope. However, the swinging shoe is far more dangerous, because it has the potential to trip up and cause bruises to the players.

5. “The Bellman” probably caused kids to tackle each other.

During the Victorian Era, a game that was sort of the opposite of blindman’s bluff called “The Bellman” came out. Based on the ad, it seems like every other modern-day toy that may have been a popular fad for a couple years before it faded away. One child would ring a bell, while the rest of the players wore blindfolds. Once they heard the sound of the bell, the kids tried to run in the direction of the sound in order to catch them. It’s very likely that the blindfolded kids collided into one another, and possibly ended up getting a concussion.

During the Great Depression, the idea of a “hobo” was actually kind of charming and endearing. People even admired hobos in a way, because they were seen as adventurers who had the freedom to jump on the next train and travel across the country. Of course, the reality of a hobo’s life was very different than the romanticized version.

A “Hobo Party” was themed entirely around pretending that you were homeless. Party guests showed up dirty, and wearing their oldest clothing. All of the games were themed around the idea of being homeless, like one game similar to “musical chairs”, except that players had to jump on top of crates that were supposed to be box cars. When it was time to eat, party guests had to knock on neighbor’s doors to beg for sandwiches, beer, and spare change. Party hosts were supposed to let their neighbors know ahead of time that they were getting ready to play an adult version of trick-or-treat, and provide food for them beforehand. This tradition was strange and downright insulting, so it’s not surprising that it didn’t last long.

This game was a combination of “musical chairs” and “Simon says.” The leader would stand in the middle of a circle of party guests sitting in chairs. The person in the middle points to a random person and asks, “Do you love the neighbor to your right (or left)?” If that person says “No, I love…” and points to another person in the circle, the “neighbor” and the person being pointed at both have to stand up and change seats with one another as quickly as possible. If they aren’t fast enough, the person in the middle will steal the seat of one of the people who stood up. Whoever is left standing becomes the new leader in the middle of the circle, and ask the same question.

Instead of saying “no”, they could respond with, “Yes. I love all of my neighbors, except for those with blue pants.” Just like “Simon Says”, the players had to listen carefully to what was said to make sure they fit that description. Then, they had to jump up and change to a different seat with someone else, before the person in the middle could grab the chair, and so on.

The one major downside to this game was the fact that there was really no way to make it stop or choose a winner. It also apparently lead to a lot of precious household objects breaking from kids running around the chairs in the family parlor.

2. The “Marriage” and “Marriage and Divorce” Games prepped young people for their futures.

For young people who can’t seem to figure out what the opposite sex is looking for in a mate, the “marriage” game was a good way for teenagers and people in their 20’s to talk about what they look for in relationships without burning their own egos. The girls in the party talked about the names of various male celebrities and even fictional characters, wrote the names down, and put them in a bowl. The boys would draw a name, and they would have to take on the persona of that man.

Next, the man would ask a girl to marry him. She would have to say “yes” or “no” based on the characteristics of the character he was playing, not the boy himself. Then, they had to explain to the whole group what her logic was for her decision. For example, if a young man had to take on the persona of the fictional character Dorian Gray, the girl might say, “No, I don’t want to marry Dorian Gray, because he is too arrogant.” He has to move on to the next girl, and ask for her hand in marriage. Sometimes, a girl might say “yes” and give her reasons for why she would marry that person or character, even if others would not.

It was actually a great lesson for young folks that different qualities are attractive to different people, and that even if they are rejected by someone they like, there is still someone else out there for them.

Another similar game was called “Marriage and Divorce”, which was kind of like speed-dating. A young man and woman would come together for the night to get to know one another, but they were forced to talk about the serious issues that only married couples get into. If they realized they were not a good match, they could choose to “divorce” them.

1. You could hide a bad hair day going to a “Paper Sack Party”.

Yet another strange 1900’s game required party guests to wear a paper bag over their head during the entire party. Each bag had a number written on it. The object of the game was to have people talking to one another without knowing who was behind the paper sack. They would have to guess the identity of the person based on the conversation. Each person had a notepad where they would keep track of who they thought the people were. One would hope that they could recognize the voices of their friends, but maybe trying to disguise your voice was part of the fun in messing with people.