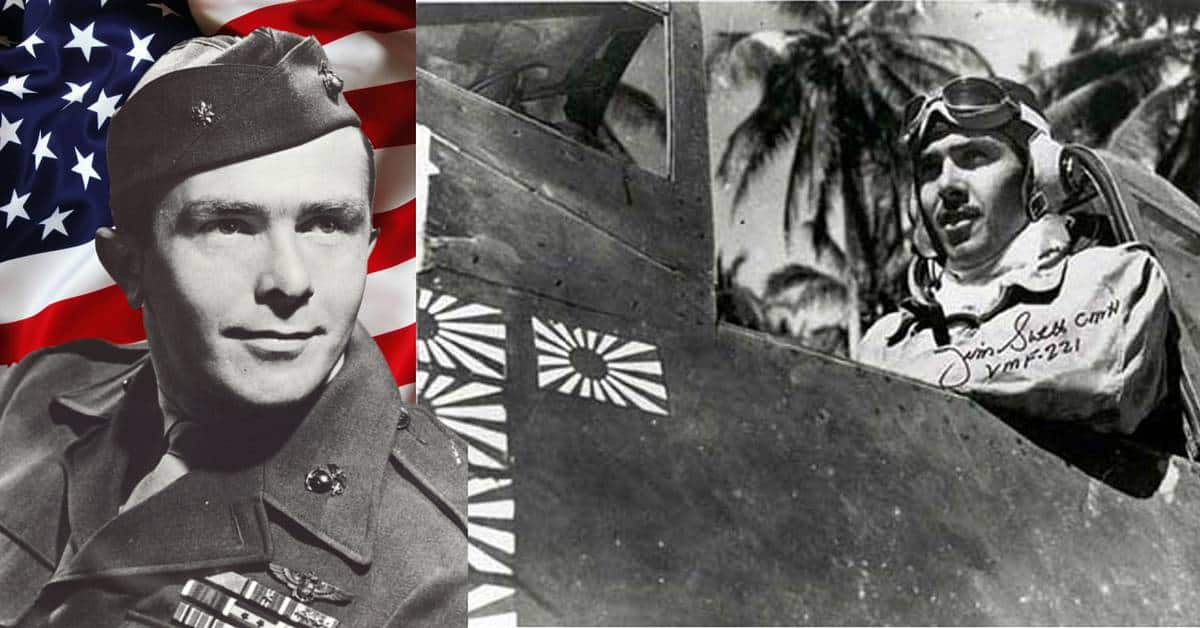 Cut from a Different Cloth

Born in 1920, Swett was a Seattle native but graduated from both high school and junior college in San Mateo, California. He earned his private pilot’s license before entering the war, which was a considerable investment of both time and effort. Swett enlisted in the Navy Reserves, attended flight training in Corpus Christie, Texas and Quantico, Virginia, where he excelled in his studies. He was appointed as a cadet and later earned a commission as a second lieutenant in the Marine Corps Reserve on April 1, 1942. It was only a year later when Swett would find himself battling Japanese pilots in the skies over Guadalcanal as an active duty combat aviator.

In addition to the incredible engagement at Tulagi, Swett went on to distinguish himself as one of the greatest aces in Marine Corps History. According to official records, Swett fought in the South Pacific until January 1945, where he flew over 100 combat missions in support of major offensive operations at Iwo Jima and Okinawa.

By the war’s end, the 22-year-old aviator was credited with shooting down 15 ½ enemy aircraft, which earned him the Medal of Honor, two Distinguished Flying Crosses and four Air Medals. Swett remained on active duty until November 1945, transferred to the Marine Corps Reserve, and ultimately retired as a full-bird colonel in 1970. He would go on to run a family owned business for the next twenty years.

Only weeks after the fighting at Guadalcanal, and finding out that he had been recommended for the Medal of Honor, Swett returned to VMF-221 as a captain, where he splashed six more Japanese bandits from the cockpit of a Vought F4U Corsair. Swett got shot down a second time, over the skies of New Georgia Island. On this occasion, the Coast Guard did not come to his rescue.

Swett was instead fished out of the sea by a pair of natives in a canoe, who paddled almost half a day to return him to friendly territory. Swett took a short break, briefly returning home to the United States, but quickly got back into the fight. In 1945, he was assigned to an aircraft carrier, the USS Bunker Hill, which played a pivotal role in several subsequent campaigns.

Following the end of WWII, Swett went on to command Marine Attack Squadron 141, based at Naval Air Station Alameda, California. The Marines of VMA-141 were part of Guadalcanal’s “Cactus Air Force,” and previously saw action alongside Swett at Henderson Field during the war. Originally designated as Marine Scout Bombing Squadron 141 (VMSB-141), the unit underwent a series of organizational changes and moved locations several times before finally setting near San Francisco Bay, in Alameda.

VMA-141 later deployed to Korea, although without Swett at the helm; the U.S. Navy apparently thought better of placing a Medal of Honor recipient back in harm’s way. The squadron was finally decommissioned in 1969. Swett transferred from active duty, back to the Marine Corps Reserve, and retired during the following year.

With his military career at an end, Swett fully took over the family business, which he got involved in when his father passed away ten years earlier, in 1960. He spent the next twenty-three years manufacturing marine pumps and boat motors, until retiring from this second career in the early 1980s. Swett frequently spoke about his war experiences, during the remaining decades of his life, sharing the importance of honor, courage, and commitment with young adults and students in his community.

Swett relocated to Redding, California in 2007, where he resided until his death in 2009 at the age of 88. Swett was survived by his second wife, Verna, who passed away earlier this year, and his two sons, James Jr. and John.

James E. Swett was a Marine icon and incredibly proud of his service. For all his vast accomplishments, however, he remained bitter about one thing. During a 1991 interview, he revealed to a reporter that he hadn’t received full credit for his heroic performance on that fateful April day back in 1943. “Actually, I shot down eight of those Japanese dive bombers,” Swett asserted, “I’m still mad at the Marine Corps for confirming only seven.”