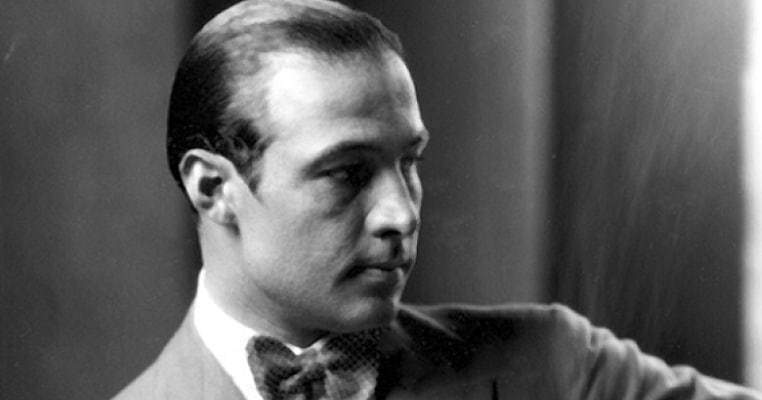 When silent movie star Rudolph Valentino died in 1926, his death sparked off riots and a number of women committed suicide. Throughout his short acting career, Valentino endured much negative media speculation about his sexuality and had an often troubled private life. His death at an early age contributed to his iconic status and also cemented his legacy in Hollywood. Today, Valentino is still fondly remembered as one of the greatest stars of the silent movie era.

Rodolfo Pietro Filiberto Raffaello Guglielmi, better known by his screen name, Rudolph Valentino was a Hollywood silent movie star famous in the 1920s. Born in Castellaneta, Italy on May 6, 1895, Valentino moved to America in 1913 aged eighteen. Initially, he struggled to find work and ended up living on the streets. He worked as a gardener, a dishwasher, a waiter, and then as a taxi dancer at Maxim’s Restaurant-Cabaret, where older wealthy women happily paid for the pleasure of his company.

Around this time, Valentino befriended a Chilean heiress named Blanca de Saulles, who was unhappily married to a successful businessman, John de Saulles. Following their divorce, Valentino testified at a custody hearing on behalf of Blanca, claiming that he had evidence that John de Saulles had been engaged in multiple affairs, including with a dance partner of his. John de Saulles then used his connections to have Valentino jailed for a few days on bogus vice charges, which, while untrue, still damaged Valentino’s reputation to the point that he found it difficult to get work.

When Blanca later shot her husband, Valentino decided to avoid the impending trial, and left New York for Hollywood to pursue an acting career, and changed his name to Rudolph Valentino. However, Valentino’s exotic good looks made him stand out among an era of a more rugged and therefore considered more masculine Hollywood contemporaries, which resulted in him being cast in a series of smaller roles, mainly as villains.

Valentino received his big break when he landed the leading role of Julio in the Four Horseman of the Apocalypse. The movie was released in 1921 and went on to be massively successful. It was one of the first films to gross $1 million. However, despite the success of the movie, Valentino’s exotic looks proved too much of an issue for the studio executives, and they refused to offer him a pay rise or any other starring roles. Valentino ultimately broke ties with them and began working for a different film studio, Famous Players-Lasky.

Rudolph Valentino publicity photo for Four Horsemen of the Apocalypse. thevintagenews.comValentino was cast in the lead role in the movie The Sheik, which proved to be another hit and the role for which the actor is best remembered. Valentino’s went on to star in Blood and Sand, The Eagle and The Son of the Sheik. Valentino’s unique good looks and his starring role in romantic dramas won him the affections of millions of women and earned him the reputation as “The Great Lover” of the silent movie era.

However, Valentino’s “pretty boy” image was considered to be effeminate and because of this, it resulted in a lot of speculation and conjecture about Valentino’s perceived homosexuality. These stories surrounded the star throughout his career. Valentino had been married twice, to Jean Acker and Natacha Rambova but the press speculated as to whether these were, in fact, “lavender marriages” to hide Valentino’s homosexuality. Questions about his sexuality are said to have deeply hurt Valentino and he actively confronted journalists who published stories propagating these rumours.

In what turned out to be his last movie, The Son of the Sheik, Valentino received a favourable review from the New York Times which also added that the “desert rough stuff and bully fights” contained in the movie left “no doubt about his masculinity.” An indication of Valentino’s popularity and allure among his female fans was demonstrated following the premiere of the Son of the Sheik in New York. Despite temperatures close to 100 degrees, thousands of his fans swarmed around the movie theatre hoping to catch a glimpse of the star. When he was leaving, Valentino was mobbed and in the frenzy had his clothes ripped off by women overcome by desire!

Just two weeks later and at the height of his fame, Valentino took ill and collapsed in his suite at the Ambassador Hotel in New York before being rushed to hospital. After an initial diagnosis of appendicitis, it was later discovered that Valentino was suffering from perforated ulcers mimicking appendicitis, a condition which became known as “Valentino’s Syndrome” which was named after the famous star. As Valentino’s condition worsened, thousands of his fans formed a vigil outside of the hospital and anxiously awaited news. Unfortunately, Valentino’s condition continued to deteriorate and he died on August 23, 1926, aged just 31.

News of Valentino’s death was greeted with a kind of mass hysteria, where a number of heartbroken women were so devastated that they committed suicide. It was said that two women attempted to take their lives outside of the hospital where Valentino died, while a woman in London drank poison while holding a picture of Valentino. A young man who was reported to have committed suicide was found lying on a bed which was covered with photos of Valentino.

The day after Valentino died, an estimated 100,000 people gathered outside of the Frank Campbell Funeral Home in New York where the star’s body was reposing. It was reported that the crowds stretched for eleven blocks. In the chaotic scenes that followed, some people tried to force their way into the funeral home, smashing windows and sparking a day-long riot. More than 100 mounted officers and NYPD Police Reserve had to be called in to restore law and order.

Inside the funeral home, actress Pola Negri, who claimed to be Valentino’s fiancée and that the two were due to be married, was visibly devastated. Reportedly Negri threw herself across Valentino’s open coffin in despair and fainted. Supposedly this action sparked off more chaos among the already hysterical crowd outside, who broke through a huge plate glass window. Afterwards, Negri was said to shriek continuously in front of the press, while making declarations about her love for the late star: “My love for Valentino was the greatest love of my life. I loved him not as one artist loves another, but as a woman loves a man.”