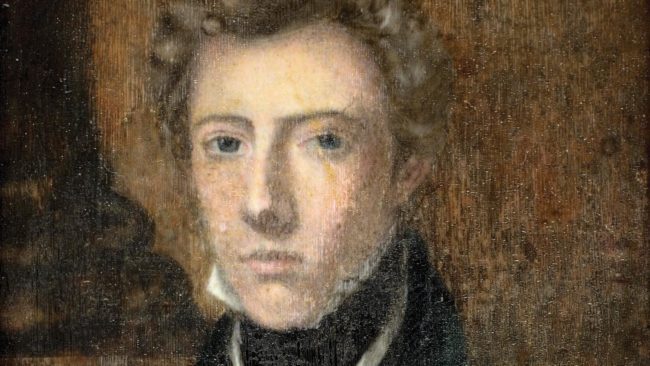 James Barry started out life as Margaret Ann Bulkley, born to a very poor family in Ireland in 1789. When Barry was a child it is believed she was raped by an uncle and gave birth to a child. From a young age, Margaret wanted to pursue things not “fit for a woman” like work in education, or join the army.

Barry’s mother had a brother known as James Barry, a painter and professor to General Francisco De Miranda, a Venezuelan radical. The original Barry was very fond of Margaret and her intelligence. When her uncle died, a plan was hatched for her to assume his identity and attend medical school in Edinburgh. At the time, it was illegal for women to study medicine.

Barry/Bulkley’s mother helped her with her disguise and they traveled to London carrying a letter of recommendation for medical school from family friend Lord Buchan. This was three years after the original James Barry’s death. The new James Barry was known to wear an overcoat, regardless of the weather, to help with the disguise. To counter Barry’s high-pitched voice and admirable skin, Margaret altered her age and was simply thought to be a boy genius.

The initial plan was for Bulkley to travel to Venezuela and practice medicine as a woman after the country was liberated. Unfortunately, that didn’t happen and Bulkely joined the army as James Barry, perhaps making a childhood wish come true. So how did Barry get away with assuming the identity of a man in the army and throughout the remainder of her career? It seems both a matter of professional respect and blind denial that protected Barry’s reputation.

Nonetheless, Barry went on to have an incredibly illustrious career in medicine. He/she rose to the rank of General and was known for vastly improving the condition of wounded soldiers and having an excellent bedside manner (although Barry was known to have a gruff manner when not working, and even participated in a duel where no one was seriously injured). Barry also performed the first known C-section where both the mother and child survived. Barry openly treated both the rich and the poor and often spoke up about sanitary conditions and the poor conditions of asylums. This made Barry somewhat of a human rights activist for the time.

Barry traveled the world taking up service wherever needed. The only mishap in an otherwise spotless military record was when Barry butted heads with a fellow army surgeon. The fellow surgeon then had him arrested and court-martialed on a charge of “conduct unbecoming of the character of an Officer and a Gentleman.”

Suspicions about Barry’s gender did arise, however, when Barry befriended Lord Charles Somerset, and the two took up residence together after their time serving. Some said the two were thought to be “buggering,” and many questioned the nature of their relationship. Commissions were even set up to investigate the scandal, but later the investigation was dropped and the pair were exonerated.

Barry’s identity as a woman was not again called into question until his/her death from dysentery when a maid laid out Barry’s body in 1865. Barry actually had wished to be buried in the clothes he died in, and that his body not be washed. The maid did not follow these rules, which exposed James Barry’s secret.

Barry passed for a man for an incredible six decades. Barry’s colleagues refused to believe this and Barry was officially buried a man with full military officer rank. Major McKinnon, who signed the death certificate, said that Barry’s gender was “none of his business.” That said, some were waiting for a secret to be revealed, and still, others even claimed after the death that they knew all along that Barry was a woman. Barry’s death certificate was initially sealed and was not opened until years later, revealing officially that Dr. James Barry had indeed been buried a man.

The Guardian – Dr. James Barry: A Woman Ahead Of Her Time Review