Why What You Know About Trepanning Is Probably Wrong 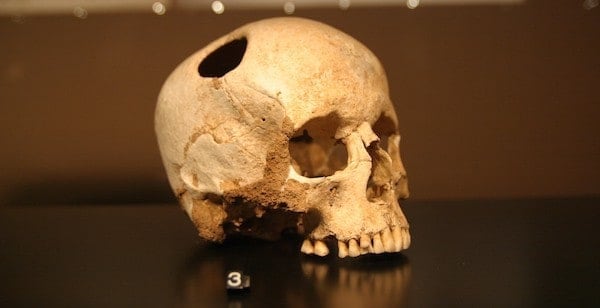 Why What You Know About Trepanning Is Probably Wrong

It’s 4000 BCE, and the sun is slowly rising over the dark forests surrounding your village. Men and women begin to stir quietly as they prepare to go about the thousands of little tasks that it takes to survive another day. A dog barks somewhere off in the distance, disturbing the morning calm. The smell of cooking fires begins to filter through the air and into your nose. To you, all of it is pure agony. The relentless pounding inside your skull and nausea in your stomach sharpen with every noise and smell. Of course, you don’t know why your head hurts. And so you go to the one person you think might be able to help.

A few minutes later, you pull back the flap of a tent. A whirl of burning sage and strange herbs you can’t identify rushes out to meet you. Inside the tent is an old man dressed in skins and woven grasses deep in a trance as he leaves his body to speak to the spirits of your ancestors and the animals your tribe depends on for survival. In time, other people will come to refer to this type of man as a shaman or spirit healer. To you, he is simply the Wise Man, the one who knows the workings of the demons inside your skull.

He examines you closely, smudging your forehead with the soot from burnt sage. He informs you that he’s spoken with the spirits. They’ve told him what he needs to do. But there will be pain. You shrug. Pain has been a part of your life for as long as you can remember. Biting cold, broken fingers, now the pounding in your head. Maybe you’re not comfortable with it, but it’s familiar to you. Anyway, what’s to be done for it? So you grit your teeth and wait as he tells you to sit. A small blade of dark stone appears in the Wise Man’s hand.

Its edge is, in the words of American novelist Cormac McCarthy, “sharper than steel… an atom thick.” It’s sharp enough to cut the flesh away from your bone, which the Wise Man begins to do. You don’t cry out, even as the blood begins to trickle down through your shaggy hair and across your neck. The pain isn’t so bad, the only thing that really unnerves you is that you can hear the stone grinding against your skull inside your head. The Wise Man makes four cuts, slicing out a small piece of your skull and folding the skin back over it.

That night, you fall into a feverish sleep as the flesh begins the process of knitting itself back together. Over the next few years, the flesh will heal and the bone will begin to grow back over the sharp edges of the cut. In time, all you’ll have left is a small soft spot near the top of your skull. You’ll live for another few years until evil gets into your bones again through a tooth. It works its way into your blood and your heart stops beating. So your bones rest beneath the earth for 6,000 years until they’re discovered by one of your descendants. She notices the hole left behind in your skull. “Why?” she asks.

At least that’s the more traditional view of why people cut holes in their skulls. The idea that the procedure was supposed to release the demons that ancient people thought caused migraines is actually likely inaccurate. It probably comes from a 20th-century English lecturer, Sir Thomas Lauder Brunton, who first suggested the idea during a presentation on migraines. It was at the time- and remains-pure speculation. It’s one of the many myths surrounding the practice. And while it remains a possibility that our ancestors thought they were releasing demons, there are probably better explanations.

Trepanning, or the cutting of holes in the skull, sounds crazy to us today. But it clearly didn’t to our ancestors. The bones of people with obvious holes cut into their skulls have been found everywhere from France to Siberia to the Americas. In fact, it may be one of the oldest surgical procedures in human history, with examples of trepanned skulls dating back to more than 8000 years ago. This dating would put these earliest trepanations in the Mesolithic, or Middle Stone Age, meaning that the procedures were likely performed with chipped stone tools.

But even with these crude surgical devices, there’s evidence that many of the people who had their skulls cut actually survived. Trepanned skulls have been found with evidence of bone growth, which suggests that the patient lived for years afterward. This isn’t as surprising as it sounds. If no cuts were made into the dura, or the membrane that separates the brain from the skull, there was actually little risk from the surgery itself besides infection. And if dura remained intact, the cut into the skull is small enough, and was eventually covered with regrown skin, then the soft tissue of the brain would still be relatively protected.

In truth, we don’t know for certain why people wanted to be trepanned. The majority of the procedures might have served a more ritualistic purpose. Many groups of people throughout history have changed the shapes of their bodies for religious reasons, or just to set themselves apart from other people. The Huns, for instance, used to bind the heads of their children so that their skulls would grow into elongated shapes. It’s possible that some cases of trepanning were done for similar reasons. If so, then we have no record of what exactly it was supposed to achieve.

There’s also the possibility that these ancient examples of trepanning actually were supposed to cure illnesses, though we don’t know which ones. Given the age of the bones in question, it’s hard to tell exactly what sort of medical conditions the people who went through the procedure might have been suffering from. And many conditions that our ancestors might have been trying to cure- if that’s what they were trying to do- by cutting holes in the skull, like headaches, epilepsy, or mental illness don’t leave any obvious signs behind. But we do know that at some points in history, trepanning was absolutely an accepted medical procedure. In some cases, it was actually the best option an ancient surgeon had.

In 400 BCE, famous Greek physician Hippocrates wrote a work on treating injuries to the head. Inside, he advised other physicians on when and how they should treat patients by trepanning. In the time of Hippocrates, the use of stone tools had given way to metal. And the tool that Greek physicians would have used was essential a circular drill. It would be turned by crank or bow. And as the tip of the drill spun, it would saw a small hole in the bone of the skull. Unlike in earlier trepanations, we know exactly why Hippocrates suggested the procedure.

In the work, Hippocrates lays out exactly which patients needed to be trepanned and why. “When an indentation by a weapon takes place in a bone it be attended with fracture and contusion, and even if contusion alone, without fracture, be combined with the indentation, it requires trepanning,” he advised. In modern terms, Hippocrates was describing a skull fracture resulting in brain injury. If he didn’t understand the role of the brain in the body or why trepanning would have helped for this type of injury, he at least knew that it seemed to save people’s lives.

In such cases, the brain begins to swell, pushing up against the skull. It can often be fatal. By removing a portion of the skull, trepanning relieved the pressure on the brain, preventing serious damage. Even today, it remains a common procedure for these types of injuries, although doctors now refer to it as a “craniectomy.” So while trepanning might seem a little brutal, it’s actually still sometimes necessary. For Hippocrates, sawing through someone’s skull when they were still conscious was often the right thing to do. In fact, he was ahead of his time in many ways.

In the Middle Ages, we actually see a shift backward in many areas of medicine, including trepanning. Around the 10th century, people in Hungary were still using trepanning as a ritual. There are several surviving skulls from the period with holes cut into them that seem to have been ritualistic. And in the 15th century, trepanning was performed by doctors throughout Northern Europe in an attempt to cut through to “The Stone of Madness.” Doctors assumed that people with mental illnesses actually had a stone in their brain that could be removed to cure them. It’s a far cry from the careful, clinical observations of Hippocrates.

It’s also important to remember that if trepanning seems like a brutal to us, it likely did to people at the time as well. After all, it’s unlikely anyone ever looked forward to being trepanned. But people in pre-modern societies had a different relationship with medicine than we do today. Medicine was crude by our standards. Any type of surgery would have been painful by necessity in a time before anesthesia. There simply wasn’t an alternative. People at the time probably understood and accepted that. Trepanning, by contrast, wasn’t more painful than most procedures. And in fact, it probably saved many lives.

“Drilling holes in the skull was never a migraine cure – here’s why it was long thought to be”. Katherine Foxhall, The Conversation. March 2018.

“On Injuries of the Head”. Hippocrates, University of Adelaide. December 2014.