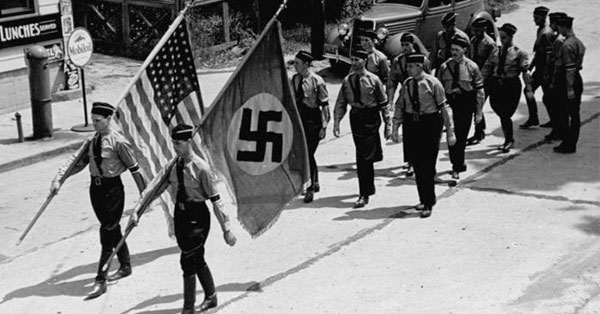 While the world today recognizes Nazism for the evil that it is, things were not always so clear cut. In the heady days of the 1930s, economic turmoil caused by the Great Depression drove the radicalization of people around the world who were looking for someone to blame for their troubles. The United States was certainly not immune to this trend. Today most Americans know about the hate spread by groups like the Ku Klux Klan, but few recall the German-American Bund, an organization of American Nazis that hoped to emulate Hitler’s Reich in the United States.

Nazi associations began to crop up in the United States long before Hitler took power in Germany. In 1924 German expat Fritz Gissibl founded the “National Socialist Society of Teutonia” in Chicago, and quickly got to work filling its ranks with card-carrying members of the Nazi Party. As Gissibl’s organization branched out from Chicago it experimented with its branding, going through several different names including “Friends of the Hitler Movement” before settling on the more innocuous sounding “German-American Bund” in 1936. While membership in the German-American Bund was restricted to so-called “Aryans,” the Bund was quite interested in creating a community of like-minded people so long as they fit within these racial confines.

In order to fortify this growing following the organization constructed a network of camps across the United States from Wisconsin to New Jersey. These camps, though, were not the concentration camps associated with the darkest days of the Nazi regime. Instead, they were summer camps. The Bund established its flagship camp, Camp Siegfried, on Long Island outside of the sleepy town of Yaphank, some sixty miles east of New York City.

Camp Siegfried was supposed to be a haven for all German-Americans, both young and old, who had accepted Hitler’s message. Swastikas and the Nazi flag adorned buildings in the camp and the surrounding community, which featured avenues that bore names of prominent Nazi Party figures such as Joseph Goebbels and Hitler himself. For the youth, Camp Siegfried offered all of the typical trappings of a summer camp, including a lake, an archery range, and hiking trails.

Less typical were the lessons on eugenics and German language philosophy, or the parades in which children marched with both the American flag and the banner of the Nazi Party. For these ceremonial events marchers were outfitted in Hitler Youth uniforms that had been smuggled in from Germany by exchange students. The Bund even foot the bill to send a handful of campers to the 1936 Olympics in Berlin so that they could see the fatherland firsthand. While in Berlin Hitler granted the group’s chaperone, Bund leader Fritz Kuhn, a personal audience.

Across the lake from the youth camp adults came together to organize political activism, but many of them were more interested in the recreational prospects of Camp Siegfried than its politics. Shooting sports were particularly popular, so much so that the Bund briefly established an affiliation with the National Rifle Organization until the NRA learned of the Bund’s ideology and cut its ties. The big draw, though, was the beer.

Beyond being a major money maker for the Bund, the camp bar formed the center of social life, a place where Bundists could gather to enjoy a hefeweizen while extolling the virtues of the thousand-year Reich. Oktoberfest, of course, drew a consistent crowd. Those inclined to the well-known Nazi pastime of gardening could also participate in the camp’s commercial flower plantation, where one particularly enterprising Bundist produced a swastika-shaped shrubbery.

While Camp Siegfried primarily catered to an ideologically committed German-American crowd, the Bund did also use it as a site for outreach to other Americans that might still be on the fence about Hitler. When the camp hosted its annual German Day festival in August 1938 it drew 40,000 visitors, many of whom made the trip from Penn Station in New York City on the 8:00 am “Camp Siegfried Special.”

Bund women wearing dirndl, the iconic alpine peasant’s dress, welcomed attendees to the festival before escorting them inside to listen to the omm-pah band and peruse the propaganda fliers.

Curiously, visitors did not necessarily come away with the sense that something was amiss at Camp Siegfried. When the FBI later conducted an investigation of the Bund they reported that one witness “had seen nothing there that appeared at all impressive to him. They did appear to consume great quantities of beer and do a lot of marching and wearing uniforms.” Following their successful promotion of the 1938 German Day, the Bund took their message out of the camp and into the city.

In February 1939 the Bund’s National Secretary, J. Wheeler-Hill, addressed a crowd at Madison Square Garden where he spouted anti-Semitic rhetoric about the threat of “the absolutely intolerant forces of Jewish Bolshevism.”

The Bund had already started to attract the attention of authorities, wary of the danger posed by Nazi loyalist in the United States even before Wheeler-Hill’s inflammatory speech at Madison Square Garden. In 1938 representatives of the state of New York, following a consultation with J. Edgar Hoover of the FBI, brought charges against six members of the Bund for administering loyalty oaths to a foreign government. Defense witnesses, though, used the trial as a soapbox to push their ideology onto a new audience.

In one instance the court asked Martin Wunderlich whether he, as a Bund member, had pledged his loyalty to Adolf Hitler or to the American flag. Wunderlich responded by turning to the courtroom’s American flag, raising his right hand in the fascist salute, and saying “I salute the American flag as a member and proud member of the White Race.” He met a follow-up question about whether the salute that he had given was, in fact, an American salute with three words: “it will be.” Other witnesses openly bandied about anti-Semitic slogans. In the end the court did find all six Bund defendants guilty, but they subsequently won an appeal and walked free.

The 1938 trial was only the first in a long series of charges that would be brought against Bund members and organizations. The controversy dragged on so long, in fact, that the most recent case was only just settled in 2016. The Bund’s decline began when it was discovered that its leader, Fritz Kuhn, had embezzled $14,000 from the organization. The remainder of the Bund’s leadership did not want to press charges against Kuhn, but the district attorney for New York City took advantage of the incident to bring Kuhn up on tax evasion and embezzlement charges.

Kuhn was convicted and wound up serving forty-three month prison sentence. Things got worse for the Bund once World War II began in Europe. Expecting that it might soon be drawn into the war, the United States instituted a peacetime draft. The Bund pushed back, concerned that its members might be forced to fight against the fatherland, and published a newsletter instructing the Nazi faithful to evade the draft. This precipitated a flurry of arrests and prosecutions of Bundists who refused to take up arms. Facing mounting pressure, the Bund relinquished control of Camp Siegfried to a sister organization, the German American Settlement League, in 1940.

Though the League had sworn to remain non-political, when Germany declared war on the United States in December 1941 the U.S. government stepped in and took control of the camp for the duration of the war. Following the Allied victory in Europe and the Pacific the government returned Camp Siegfried to the German American Settlement League, who leveled the camp and repurposed the land for a planned housing development that became part of the nearby town of Yaphank. Still, Nazi ideology had not entirely disappeared.

While residents of the new planned community owned their homes, they still leased the land from the German American Settlement League. Consequently, the League was able to institute bylaws that governed who could own a home in the community. Among other things, these bylaws required membership in the League to purchase a home and stipulated that buyers be “of German extraction.” As a consequence, for some seventy years the community effectively restricted residency based on race.

Though illegal under the Fair Housing Act, the League’s bylaws were not challenged until 2015, when two residents sued the League for hindering the fair sale of their home. The case settled in 2016, finally removing Hitler’s footprint from Long Island.