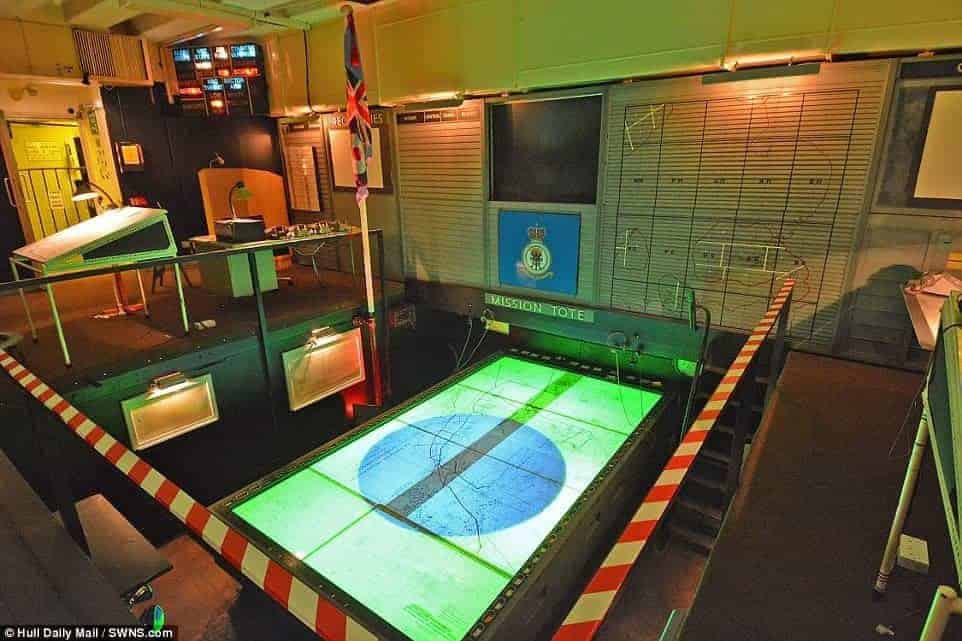 During the Cold War, several bunkers were created throughout Withernsea, East Yorkshire in 1953. The British government built 120 warning stations along the coastline. In fact, there was a station every 35 miles to defend against a possible Soviet attack. British soldiers had the frightening task of manning each station, and detecting and notifying their command headquarters of such a threat.

These brave men and women would not only be able to order a retaliation strike quickly, but they would be safe from any harm thanks to their bunker.

The construction of the bunkers was pretty straightforward: dig a 100-foot hole and place a 20-foot layer of shale at the bottom to absorb any shock. Atop the shale, a 35,000-square-foot bunker was built with reinforced concrete walls that are 10-feet thick.

Such a design would be impervious to any attack up to a half mile away.

This particular bunker was hidden under an unassuming bungalow at the Royal Air Force (RAF) Holmpton site. It was initially used as an RAF Early Warning Radar Station.

It operated as such until 1974, at which time it was refurbished into an Emergency Headquarters for the RAF Support Command. After the collapse of the Soviet Union in 1991, the Cold War effectively ended. However, the bunker remained useful for the British government. It was transformed into an Experimental Headquarters for the UK Air CCIS System.

Since 2014, the bunker has operated as a public exhibition. At the time of construction, it cost around Â£1.5 million, but with inflation, the property equals out to about Â£300 million in 2017.

The 35,000-square-foot space has been transformed into an interesting museum exhibition that simulates what living in the bunker would have been like during the Cold War.

Tourists that visit the exhibit can witness a deactivated, half-megaton nuclear warhead along with a map of the British Isles that was used during the Cold War. It depicts real target spots for nuclear attacks.

James Fox is the curator of the project. He explains that “We were operating guided tours, one tour a day in the afternoon, and people absolutely loved it, but the trouble was, as we expanded the exhibition, more and more people came along, and we hit the point at the end of 2014 season whereby we had sold all the tickets for the tour before we’d officially even opened the gates. Now people can come along and explore at their leisure, and they can stay as long or as short as they like.”

Now the fascinating site can be viewed by the public. It is hard to believe that inhabitants of the bunker would be safe from a warhead strike, as well as any biological, gas, or chemical weapons for two weeks at a time. In sci-fi books and movies, it might seem like the survivors can live in a bunker for years, but James Fox claims, “The reality is, that is complete nonsense, it’s a fairytale. If you put 100 people underground you couldn’t store enough food to feed them for any length of time. So a bunker like this was actually designed to be occupied for a maximum of two weeks.”

Mr. Fox went on to note that “Although visitors can come face to face with a half-megaton nuclear warhead, what we are trying to emphasize is it is now a thing of the past, but it was a very real threat that hung over us from 1945 until 1991. The fact is all these bunkers have gone, we don’t use them anymore; they are a thing of the past.”

The breathtaking exhibition is on display well into 2017. For over 60 years, the RAF has offered unwavering service throughout the United Kingdom. Learning about their brave duties during the Cold War and visiting this notorious bunker is just one way to honor their legacy.