How the Vikings Formed The World’s Oldest Existing Parliament 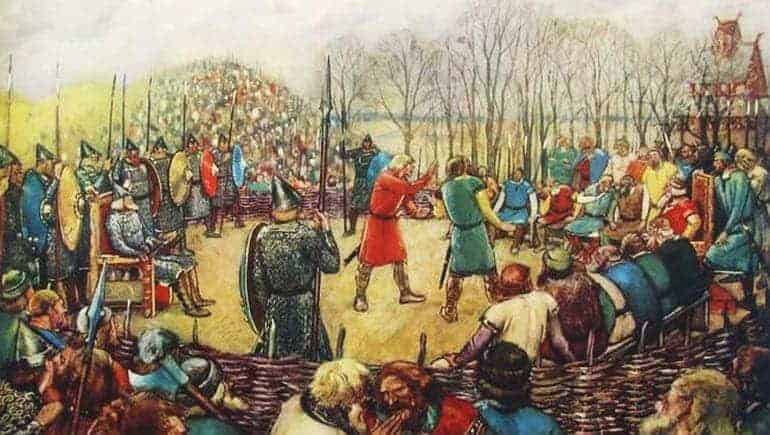 How the Vikings Formed The World’s Oldest Existing Parliament

The Thing Was Designed to Uphold Social Order

It was a difficult task because, at heart, the Vikings were warriors and preferred to settle disputes by the sword. In the Norse tradition, every family and clan was obligated to avenge their members if they died, were mutilated or were wronged in some other way. The Thing enabled families to settle their differences without the need for an all out clan war. Without the existence of the Thing, there is no doubt that practically every dispute would have been settled in a violent manner.

It is worth noting that in Norse society, every free man and woman had the right to carry out a â€˜revenge killing.’ The only caveat was that you do it in public. If you murdered someone who had killed a member of your clan in public, you would get away with it because you were perceived, to be honest. However, Vikings had to take responsibility for this action and pay any fines owed; the same rules applied if you killed someone in a duel.

The assemblies varied in importance. At the lowest level, there were local Things where community issues were dealt with. The next level involved the affairs of several local communities. Finally, the Althing dealt with national matters.

It was common for parties to try and settle their disputes before being summoned to the assembly because getting called to the Thing was deemed a hostile act. Those who were called to the Thing knew the verdict could have a terrible impact on their lives. If you were found guilty, you could be fined, declared a semi-outlaw or suffer complete banishment. If you were declared a semi-outlaw, you were banished for a total of three years.

Being declared an outlaw and suffering banishment as a punishment was an awful outcome for any Viking. Not only were they thrown out of their community, but their property was also confiscated. Also, they could not receive any help from anyone in the form of food or support. In other words, they were thrown to the wolves and expected to fend for themselves. As well as suffering from dreadful loneliness, banished Vikings were easy targets because free men were allowed to kill them without consequence.

Vikings could also settle their disputes via arbitration outside of the Thing. In these cases, both parties agreed to allow an unbiased third party to be the judge. The aforementioned Holmgang duels were usually fought to the death although both parties could also agree to fight to ‘first blood.’ The favored weapons in these duels were swords and shields. If you won, it was regarded as proof that you were right because the Gods always ensured the correct man won. The Holmgang was abolished with the introduction of Christianity.

It is important to note that while the Thing had legislative and judiciary powers, it didn’t have the power to carry out the sentence; the family of the wronged party had that particular honor. While the Thing was an extremely important event with dire consequences for those found guilty, it took place amidst a festive atmosphere. Traders took advantage of the large gatherings by bringing their goods for sale and merchants also set up shop in the area.

It was normal for the Thing to be held in a place close to a reliable source of water to make it easy to catch fish, hunt and provide grazing ground for animals. Brewmasters brought barrels of alcohol, and local chieftains used the opportunity to forge new alliances while marriages were also arranged. It seems that as long as you were not directly involved in the Thing, it was practically a carnival.

Although the Vikings were warriors and were certainly guilty of horrendous acts of violence when they plundered certain regions, they were not the uncouth savages of lore. The Thing was a democratic system of law where everyone except slaves and exiles was considered a citizen with a voice.