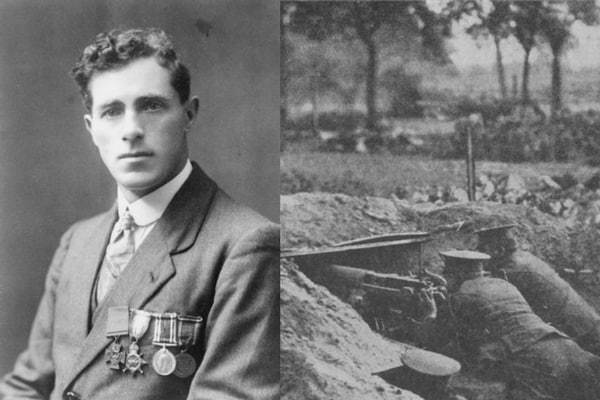 After all his travel it was some bitter irony that Curtis would be diagnosed with malaria just a month into his French campaign. This got him sent to London where he spent a month recovering and was given a ten-day furlough to visit home. This was Curtis’ first time home since the start of the war, and after his leave, he was sent right back to the front lines.

As the Americans were pouring into the front it was time for the allies to slowly push forward. Fighting at Le Cateau, a site fiercely fought over and won by the Germans four years earlier, Curtis would use the courage and likely a feeling of invincibility to earn his Victoria Cross.

Pinned down by heavy machine gun fire, Curtis and his platoon found their attack stalled. Le Cateau was very near the border of German-occupied Belgium. Belgium had been conquered except for a sliver of territory for the entirety of the war and this attack was key to its liberation.

Knowing he had to do something, Horace Augustus Curtis ran through no-man’s-land, risking fire from crossfire from both sides. He charged directly towards a group of six machine guns, enough to level the whole platoon. Somehow Curtis crossed the field unscathed and hopped into the enemy trench.

Once in Curtis wasted no time killing the surprised crews of the first two guns. Seeing the one-man army at work, the remaining gun crews surrendered on the spot. To sweeten his victory, Curtis noticed a troop reinforcement train approaching. All he needed to do was get in a threatening position and he forced the surrender of no less than 100 German soldiers as they filed out of the train.

Curtis just had to wait for his platoon to catch up and secure the prisoners. Though he was likely wounded to some degree, no official mentions were made of his injuries. Though it was a relatively small action in a war of millions, Curtis’ heroism was a spectacular example of heroism that existed all along the front during the final pushes of the war.

Aside from artillery, machine guns were one of the biggest killers of the First World War. The position and role of machine guns on the battlefield was precisely to stop massive straight-ahead infantry charges. Multiple emplacements together were not able to stop the lone Horace Curtis.

The exact way Curtis approached is unknown; perhaps he had an expert use of cover learned from years of combat experience. Maybe he sprinted like his life depended on it. And it was very likely that the defending Germans were shocked into inaction, a counterintuitive result, but one that we have a few examples of during the World Wars.