The U.S. Government Secretly Tested Weapons on the Citizens of St. Louis 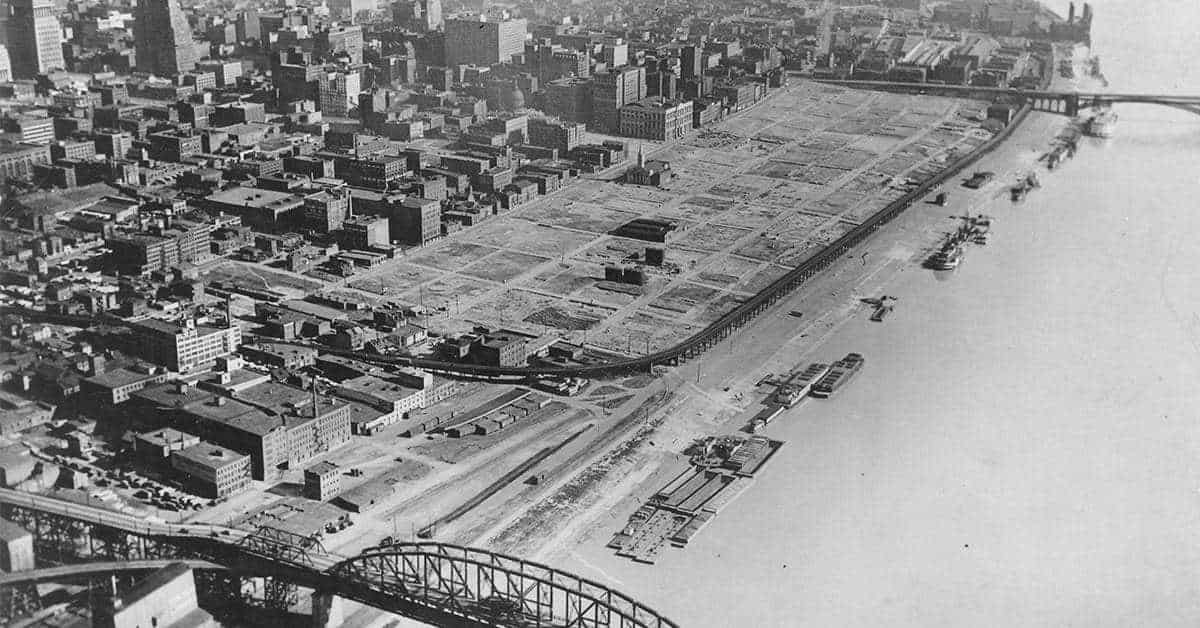 The U.S. Government Secretly Tested Weapons on the Citizens of St. Louis

There are many disturbing images from the 1950s days of the Cold War, not the least of which are the films of school children crawling under their desks as a means of surviving the blast of an atomic bomb. Radioactive fallout was just one of the perils presented by a potential war with godless Communism in the form of America’s recent ally the Soviet Union. Another, of lesser concern to the general public at the time, was the use of chemical or biological weapons by an enemy, either by polluting the water Americans drank or the air that they breathed.

The United States military, in the form of the newly created United States Air Force and the venerable United States Army, stood at the forefront of defense against such attacks. Or so it seemed. Research released in the last decade reveals that the United States and longtime allies such as the United Kingdom were focused instead on the offensive use of chemical and biological weapons, and both nations established programs to develop and improve their offensive capability.

Both nations came to the realization that the efficient use of chemical and biological weapons required a marriage of the toxin used to the environment in which it was deployed. Prevailing weather systems could be exploited to gain widespread distribution of toxins in the air, and the area in which they would be most effective could be plotted in advance. Doing so required study of a toxin’s distribution in enemy areas which mimicked the meteorological conditions found elsewhere. In other words, an American city with similar wind patterns to say, Kirkoz, Russia, and with similar population density, could be used in testing to determine if a chemical weapon attack against the North Koreans was feasible. St. Louis, MO was one such city.

Following the use of gas weapons in the First World War the civilized nations of the world agreed at Geneva to outlaw the use of “asphyxiating, poisonous or other gasesâ€¦” and “â€¦bacteriological methodsâ€¦” of killing one’s enemies during military conflicts of the future. The agreement was not entirely new, prior to the First World War, the civilized nations had agreed to ban chemical warfare, relying instead on the more tried and true methods of killing one another’s troops with bullets, bombs and artillery shells.

Prior to World War II several violations on the ban occurred, usually on groups unable to retaliate in kind or with conventional firepower. The Spanish used mustard gas during the Rif War. (A rebellion of Berber tribes in Morocco). Likewise, the Japanese resorted to the use of mustard gas against ethnic uprisings in Taiwan, and the Italians found gas warfare useful when deployed against the Abyssinians just prior to World War II. (Americans first used biological weapons during the French and Indian Wars, through the distribution of smallpox infested blankets.)

During the Second World War, the possibility of an enemy deploying chemical weapons encouraged all the warring powers to stockpile them as a threat of retaliation. It is one thing to use weapons of mass destruction against a helpless enemy, yet another when the enemy has the ability to strike back. Despite the scorched earth policies adopted by nearly all of the major combatants during the war, chemical weapons remained unused.

Unused, but far from undeveloped. Throughout the war the fear that the enemy may be developing a chemical capability which might be devastating motivated both the Axis and Allied military to explore new and more deadly chemical capabilities. Winston Churchill actively lobbied for the use of chemical weapons, both to defend against invasion and to destroy German population centers, eliminating the enemy work force. A perception developed that chemical weapons eliminated enemy troops and populations without destroying infrastructure – a post-war advantage over destructive bombs, including nuclear weapons.

At the end of World War II US and British scientists were dismayed to learn that the Germans were far ahead in the development of chemical and biological warfare agents. German scientists had developed artillery shells capable of delivering highly concentrated sarin, tabun, and other nerve agents to a battlefield, without endangering their own troops. Of even greater concern to the western powers was the knowledge that the Soviet Union – an ally with which relations were rapidly deteriorating – now had access to the same technology.

The Germans had developed the means of delivering chemical agents via artillery, rocket, and from aircraft. Once the toxic agent so delivered was suspended in the atmosphere, wind currents allowed it to drift across large areas. As the toxic cloud drifted its toxicity decreased due to being spread out in a less concentrated form.

The Germans had been unable to collect much data on the effect of this dilution due to the pressing issues of dealing with the Russians on the one hand and the Western Allies on the other. Yet the Germans never used their chemical capability. The Nazi hierarchy refused to allow the use of gas or chemical against troops on either the Eastern or Western front during the hostilities.

As the United States fought a conventional war in Korea, the Chemical Weapons Corps studied ways and means of using toxic agents on the battlefield and against North Korean, Chinese, and Soviet bases and cities. They did this by simulating attacks on American cities, which possessed geographic, meteorological, and demographic similarities to those in enemy nations. St. Louis was one such city.

The Chemical Corps would never have considered using an actual biological toxin against an American city. A substitute material was required. It came in the form of Zinc Cadmium Sulfide, which had been used in similar dispersal tests along the Georgia and South Carolina coastlines, where it drifted harmlessly off to sea. The material was further treated in some cases with Radium FP226, a fluorescent substance believed by the Army to be harmless, which more readily enabled tracking of the material as it was dispersed in the atmosphere.

Some of the zinc cadmium sulfide was dispersed in the air via US Air Force C-119 cargo airplanes. The majority of the substance was distributed in St. Louis via rooftop fans and roving vehicles on the ground. To reassure residents the Army announced that the project was testing “smoke screens” as part of developing plans to defend St. Louis from an air attack. Large amounts of the material was distributed from the rooftops of the Pruitt-Igoe housing complex, an urban housing project completed in 1956. The complex exhibited density of population similar to areas targeted in recently rebuilt Soviet and East German cities. More than 70% of the residents were children under the age of 11, also reflective of the population of Soviet housing projects.

None of the residents, nor the authorities of St. Louis, nor those of Missouri, nor the health authorities, nor the Congress were notified of the tests. Army records data indicate that some of the substance traveled upwards of forty miles, carried by the prevailing winds.

The Army conducted their experiments a second time, from 1963 to 1965, in comparable secrecy. Army officials reiterated that the compound being sprayed, zinc cadmium sulfide, was harmless, without acknowledging the addition of FP226.

By the 1990s, evidence of abnormal incidence of several types of cancer among former residents of the areas involved, including the Pruitt-Igoe housing complex, drew the attention of researchers and forensic specialists. The Army denied that any of the materials sprayed as part of the chemical weapons research were toxic, and resisted congressional inquiries. Since the tests were conducted several links have been established, though not definitively proved, between zinc cadmium and varying forms of cancer. The distribution of potentially radioactive and carcinogenic material is only part of the troubles leftover from the Army’s testing on unknowing subjects; growing anecdotal evidence links zinc cadmium sulfide to chronic lung and respiratory ailments such as COPD.

As of 2012, the official position of the US Army remains that no harmful materials were distributed as part of the testing.

The Pruitt-Igoe Housing project was abandoned by the early 1970s and destroyed by demolition over the course of several years. By late 1976 it was gone. In April 2016 the US Army Corps of Engineers made news when it dropped the former site of Pruitt-Igoe from consideration as a home for the National Geospatial-Intelligence Agency’s (NGA) western headquarters complex. The Corps of Engineers did not cite a specific reason for dropping the site from consideration despite previously reporting on it favorably.

Local authorities claim, with some support from officials with the NGA, that the site was dropped from consideration because of the presence of toxic materials contaminating the site. While some of those toxins are undoubtedly asbestos and lead, persistent reports of radioactivity appear in local media and government discussions of the site.

Army records of the St. Louis testing, formalized as part of Operation LAC (for Large Area Coverage, the Army name for their testing) remain classified as of 2017. Whether or not the Army had knowledge – then or now – that it was spreading toxic radioactive material over a wide swath of the mid-west remains hidden behind the screen of national security, despite it taking place more than sixty years ago. What is undisputed is that the Army conducted experiments on unknowing citizens, some of whom may only recently be experiencing the effects.

Besides the zinc cadmium sulfide, recent revelations by researchers and the Army establish that other toxins were distributed as part of Operation Lac, including serratia marcescens, a bacteria linked to hospital infections; bacillus globigii, a biological warfare stimulant; bacillus subtilis, used to treat urinary tract disease; and aspergillus fumigates, which causes diseases in those with autoimmune disorders.