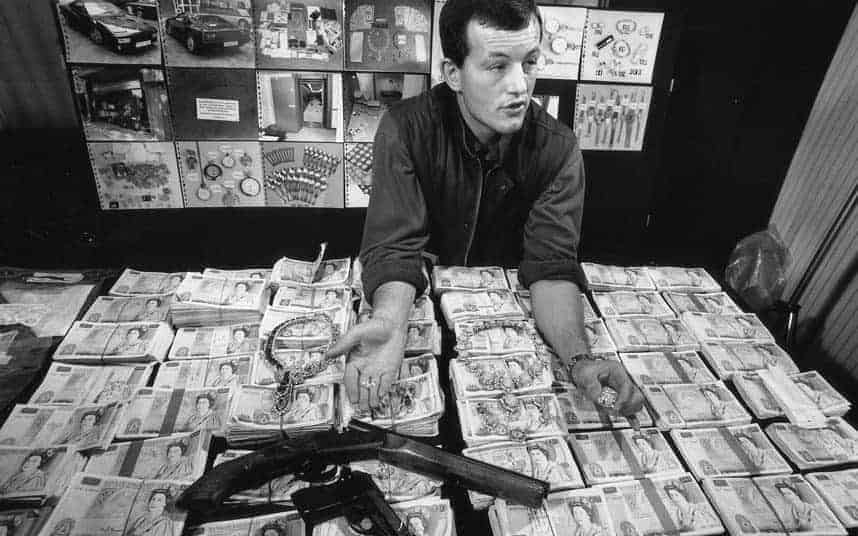 Not content with carrying out a daring raid on a Harry Winston jewelry store in Paris in 2007, eight thieves completed a second theft at the same location just one year later. The gang were members of the notorious Pink Panthers group (named after the series of comedy movies) and perpetrated their first theft in October 2007. On that occasion, four armed men dressed as decorators entered the store at around 10:00 a.m. and forced the manager to deactivate alarms and open safes. Within 30 minutes, they left with hundreds of items of jewelry worth over $30 million.

Most people would be delighted to escape scot-free with such a huge haul, but whether they were motivated by greed or simply the adrenaline rush of planning and completing a heist, they returned to the same store on December 4, 2008. On this occasion, four men entered the store (two were dressed as women) and pulled out handguns. There is a suggestion that a security guard helped the gang on both occasions.

Within 20 minutes, the gang left with an estimated $70 million worth of jewelry. Detectives referred to the spectacular theft as the ‘heist of the century, ‘ but on this occasion, the gang did not disappear into the wind. Police discovered 19 rings in a plastic box encased in a concrete mold down the rainwater drain of the home of Douadi Yahiaoui. He was a suspect in the crimes and police tracked him down to the northern Parisian suburb of Seine-Saint-Denis. Doudou, as he is known, was a career criminal and served over 20 years in prison for drug offenses and robbery.

An estimated 25 people have been arrested since the crime took place, and in 2015 the eight men directly involved in the theft were jailed. The sentences ranged from eight months to 15 years. Doudou was supposedly the mastermind, and he received the longest sentence.

On May 2, 1990, John Goddard was walking down a quiet side street in the City of London holding a briefcase. Nothing unusual about that, you might think except for the fact his case held 301 Treasury Bonds valued at almost £1 million each! As a messenger with a money broker called Sheppard’s, Goddard routinely carried these Bank of England Treasury Bills, but on this day, he ran into a mugger who relieved him of the bonds, which were as good as cash.

Police believe that a petty crook named Patrick Thomas was the mugger, but Thomas couldn’t be charged since he was murdered in December 1991. Five men were eventually arrested in connection with the theft, including Keith Cheeseman, who received a six-and-a-half-year prison sentence. However, he was the only person to serve jail time for the robbery because the other four individuals were acquitted due to lack of evidence. Bizarrely, during the trials of these four men in 1991, no evidence was offered, so they were all able to walk free.

An informant helped the police recover 299 of the bonds, and the FBI and City of London police worked together to infiltrate the gang. There are a few unanswered questions regarding the City Bonds Robbery. First of all, why was Cheeseman the only person convicted? And who murdered Thomas?

Police wrapped up the case relatively quickly, but it seems incredible in such a lucrative robbery that only one man suffered the consequences when the identities of other participants were presumably known. It is also remarkable that one of the largest robberies in history was carried out by a low-level thief using a knife in broad daylight.

For a theft that resulted in the heist of approximately $282 million, the Dar Es Salaam incident in Baghdad, Iraq received relatively little media coverage. The thieves clearly used the prevailing chaos in the city to perpetuate the heist on July 11, 2007. At the time, even the local police and Iraqi Government couldn’t agree on the most basic details. Local police said two guards pulled off the robbery whereas the Interior Ministry suggested that three men were involved.

The morning after the theft, employees of the bank came to work only to find the doors unlocked, the vault wide open and the money has gone. There are a host of unanswered questions about the robbery, and to this day, no one has been arrested and none of the cash has been recovered. Why did the bank have so much cash on that day and why was it in U.S. Dollars rather than Iraqi Dinar?

It is likely that the men had the assistance of the local militias because there is no other way they could steal that amount of money and safely leave the city. To give you an idea of the utter carnage in the city of Baghdad at that time, a total of 18 people were murdered on the same day as the heist.

As the Nazis proved during World War II, it is much easier to steal huge amounts of money in wartime than in times of peace. Whoever carried out the Dar Es Salaam bank robbery took advantage of lax security and will probably never be caught.