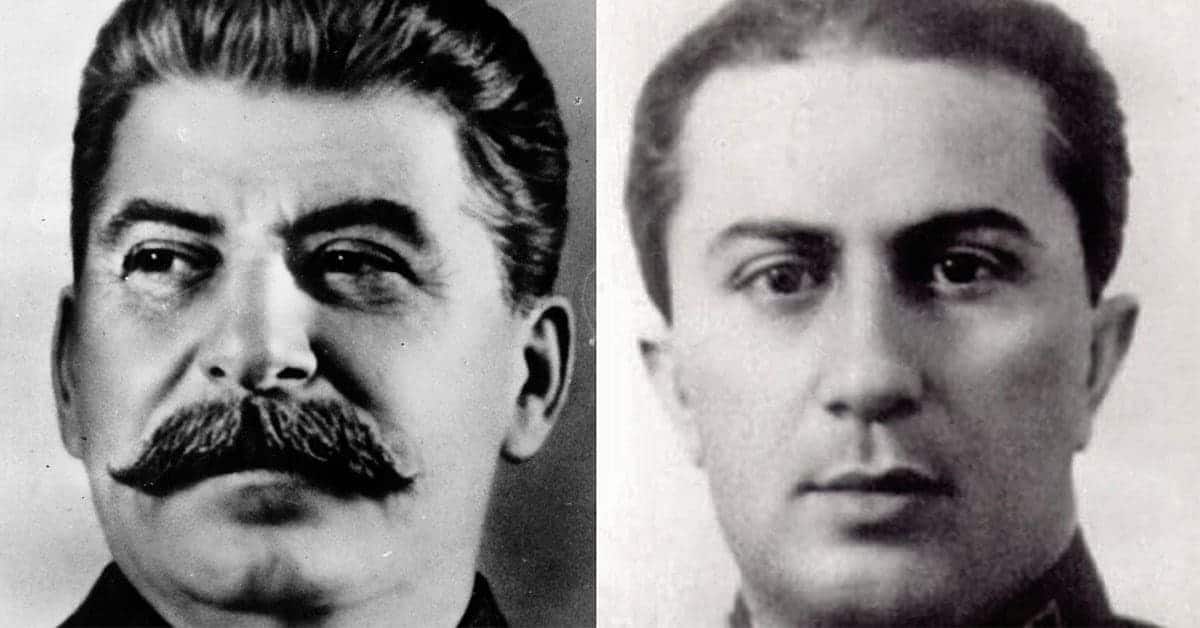 Stalin’s many crimes are well documented. Decades of scholarship has documented his political actions and the murderous ruthlessness with which he achieved his goals. Far less is commonly known about his family life. Unfortunately, an exploration into the way in which he treated his family often mirrors the way in which he treated the millions of strangers which perished within the Soviet Union due to his actions. The tragic life of Stalin’s eldest son is a prime example of Stalin’s nearly inexhaustible cruelty towards his own family.

Yakov’s relationship with his infamous father was tense from the beginning. Yahsa, as he was often called, was, in many ways, the opposite of his domineering father. “He was a deeply peaceful person – soft, a little clumsy, very quiet, but inwardly solid and committed. He had nothing in common with his father except the almond-shaped Caucasian eyes. He was modest, simple and hard-working“, Yakov’s half-sister later recalled.

Perhaps his inward demeanor was the product of a mother that died of typhoid when he was only 8 months of age. His father, then still using his given name, Iosif (Joseph) Dzhugashvili was an absent father, all but ignoring his first-born child in favor of his Marxist revolution. Life with his father never improved. In fact, it only got worse, reaching new heights in the dreadful killing fields of WWII’s Eastern Front.

In a very real sense, Yakov’s fate was sealed the moment he was born to Stalin, but the more immediate events which surround his death came as a result of what Russians to this day call the Great Patriotic War. The invasion of the Soviet Union by Nazi Germany in June of 1941 constituted the some largest military engagements of WWII. Initially, German success was so rapid that it seemed like the blitzkrieg would soon conquer yet another country.

The Soviet military was in the midst of a massive collapse, weakened by a series of deadly personnel purges in the 1930’s. Stalin himself was in shock and could not be shaken from his nearly catatonic state for days. But the Soviet Union was a massive country and no matter how much territory the Germans conquered, seemingly, more country lay ahead, yet to be seized.

Eventually, Stalin awoke from his paralysis and rallied the Soviet war machine to make a stand; first at Moscow and then, Stalingrad. The German blitz finally stalled at the massive city on the river Volga during the summer of 1942. The German military command believed most major war objectives would be achieved by the winter, but as the year came to an end, the fighting was still fierce – with no end in sight. The invaders and the invaded both settled in for the greatest and longest battle of the war.

Arguably, this fatefully disastrous invasion began a clash between two of the greatest mass-murderers of the 20th Century. The ensuing bedlam tore apart families, destroyed the countryside and created deep heartaches for all involved. Though the personal tragedies of this terrible time are countless, one high-profile family struggle stands out – that of Stalin and his eldest son.

It was during this time that Yakov was thrust into an international game of secret diplomacy, propaganda and callus cruelty. Years before, Yakov joined the Soviet military, perhaps in an attempt to distinguish himself from his father’s looming reputation. Refusing special treatment, he advanced through the military like all others, achieving the rank of Lieutenant in 1940 and receiving a command just a few weeks before Hitler’s invasion. Not able to see his father before he was sent to the war front, Stalin simply commanded him to “Go and fight“, over the telephone.

According to declassified Soviet documents, Yakov refused special treatment even in the midst of mass chaos during those first few weeks. An official letter written to the Political Director of the Soviet Army stated that attempts were made to put him into a safer staff position. Yakov replied: “I will only return with my battery“. He made the decision to fight despite documents from his combat division worriedly stating that “Some 300 men are missing…” all from leadership positions, as well as “800 noncommissioned officers…” The report goes on to state that “35% of the planned trucks are missing, only 24% of all tanker trucks are here, and only 53% of armored vehicles”.

Regardless of Soviet efforts, soon, whatever men and equipment were present were quickly defeated by a much more competent German force. Less than a month after the initial Nazi invasion, the whereabouts of Yakov and his entire regiment were unknown. Since Yakov was the son of the most feared man in the country, multiple searches were initiated, in a desperate bid to find his whereabouts. It did not take long before a lead was found. The searchers found a soldier who was recently with Yakov.

The soldier stated that during the confusion, he and Yakov escaped the carnage after which they both buried their military identifications and put on civilian clothes. After they reached the banks of a lake, Yakov told the other soldier to keep on going, insisting that he needed to stay behind and rest. Information in an official letter chronicling the investigation strongly suggested that Yakov willingly surrendered to the Germans, though it is unclear to this day as to whether he was captured or surrendered.

Regardless of how he became a prisoner, Stalin’s first born son was in the custody of the Nazi war apparatus and his miserable fate, though still two years away, was sealed. Nazi leadership immediately understood how important Stalin’s son was as a propaganda tool and as a possible bargaining chip. Very soon, the Germans began dropping ominous leaflets stating: “If Stalin’s son has saved himself, then you are not obliged to sacrifice yourself either!” Later, when Friedrich Paulus, an important German Field Marshall, surrendered at Stalingrad, Nazi leadership attempted to exchange him for Yakov, thinking that Stalin would want his son back. Stalin heartlessly replied: “I will not trade a Marshal for a Lieutenant.”

Once it became obvious that Stalin was not interested in bargaining for his son’s life, and the Germans concluded that Yakov was unwilling to cooperate with them for propaganda purposes, his treatment worsened. He was sent to the Sachsenhausen concentration camp in 1943 where his mental state rapidly deteriorated. Shortly afterwards Yakov learned of the Katyn Forest Massacre, in which as many as 22,000 Polish nationals, many of them officers and state officials, were the victims of a series of executions, buried in mass graves during 1940.

When the German army found the mass graves years later, the incident was used as a powerful propaganda tool for the Nazi cause. Taunted by a guard who showed him a newspaper with details of the massacre, the guard stated: “Look what you bastards did to these men. What kind of people are you?”

Confronted with the pitiless nature of his father’s murderous decisions, Yakov began to refuse food and his mental state further degraded. This coupled with Yakov’s belief that his father would never attempt to bring him home led to a deep despondency. After learning that Stalin said: “There are no prisoners of war, there are only traitors” he began to lose any hope he had left. About a month later, Yakov had a violent confrontation with a British prisoner of war, reportedly over Soviet atrocities.

The next day, Yakov could take no more. Burdened and despairing, he jumped from a barrack window and rushed towards an electrified fence. A guard shouted at him to stop, but he did not. Some accounts state that he yelled: “corporal, corporal, shoot me…don’t be a coward!” He continued his walk to the fence, extended his hand and touched the device that would finally take his life. The guard then shot him, as per orders. An autopsy found that he was probably dead by the time the bullets entered his body, though his remains were shortly thereafter cremated barring further examinations.

Some do not believe that Yakov committed suicide. Others do not believe he surrendered willingly to the Germans. Still others refuse to believe he was captured at all. Imaginative and unsubstantiated conspiracy theories surround these events, despite hundreds of official, declassified documents to the contrary from both Soviet and Nazi sources. But one last episode from Yakov’s woebegone life lends credence to the view that Yakov possessed the necessary determination to take his own life, as he nearly succeeded in doing so many years prior.

When Yakov was 18, he brought a girl to his father’s country home declaring his intent to marry her. Stalin flew into such a rage, the 16 year old girl ran out of the house in terror. Dejected and at his wit’s end, young Yakov found a pistol and shot himself in the chest. The bullet barely missed his heart, piercing his lung instead. Yakov narrowly survived mortal would.

Instead of feeling sympathy for his own son, Stalin inconceivably remarked: “He can’t even shoot straight.” Later, Stalin had the nerve to write: “Tell Yasha that I think he behaved like a thug and an extortionist, someone with whom I no longer have anything in common and with whom I no longer want a relationship”.

Thug? Extortionist? One cannot help but wonder if Stalin felt any sense of irony when writing these pitiless words. Though maligned and maltreated throughout his life, in every way that counts, Yakov Dzhugashvili remains a greater and more honorable man than the criminal who was his father.