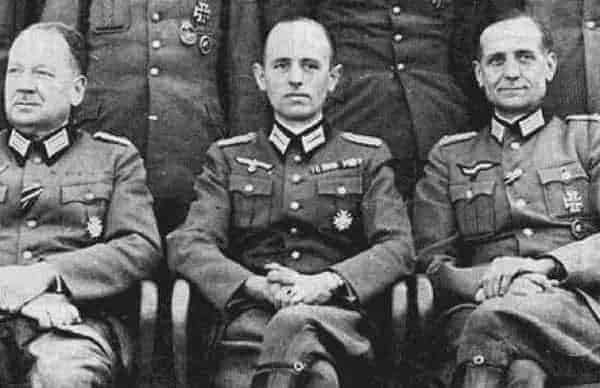 Hubertus Strughold was known as the Father of Space Medicine for his contributions to that emerging field, and was instrumental in the design and development of space suits used in both the Gemini and Apollo space programs. He was brought to the United States during Operation Paperclip in 1947, professing at the time to have known nothing regarding the Nazi sponsored medical experiments on humans conducted at Dachau.

Although the Nuremberg Trials had listed Strughold as a person implicated in medical experiments, American authorities accepted his denial. In 1935 Strughold had accepted the Directorship of the Research Institute for Aviation Medicine, which later became absorbed into the Luftwaffe. He received the rank of Colonel in the Luftwaffe and in that capacity attended a conference held in Nuremberg in which medical studies on prisoners in Dachau, including invasive surgeries sans anesthesia were discussed in detail.

Throughout his career in the United States, which began in 1947, Strughold worked on medical aspects of the space program, rising to become Chief Scientist of NASAs Aerospace Medical Division in 1962. He retired in 1968. During his lifetime he was the subject of three investigations into his possible involvement in war crimes stemming from medical experimentation on humans.

The first investigation found he was not culpable, the second was dropped for lack of evidence and the third was called off after his death in 1986. Still, rumors of his criminal activities for the Nazis had persisted throughout his career and continued following his death.

When Army documents from 1945 were declassified it was revealed that Strughold had been sought by the US Army as a war criminal at the end of the war, and later evidence surfaced that he had not only been aware of medical experiments, but had actively participated in them, although all of the patients on which the experiments were conducted survived. The experiments had been conducted on six epileptic children. Further investigation into Strughold’s war activities continues to this day.

Debus was one of the German rocket specialists who surrendered to the Americans in Austria at the end of World War II and was sent to the United States as part of Operation Paperclip with his Party membership and longstanding service to the Nazis carefully excised from his record.

When the Cape Canaveral facilities were named as NASAs Launch Operations Center Debus was named as its first director, a position he held until his retirement in 1974. Throughout his career he published numerous papers, won many honors and distinction, and held many honorary posts and degrees.

But when Kurt Debus was first interrogated by the US Army prior to his being approved for entry to the United States via Operation Paperclip, the report read, in part. “He should be interned as a menace to the security of the Allied Forces.” The end of the World War and the birth of the Cold War in the dawn of the atomic age created the need for Operation Paperclip, the full truth of which is still being revealed.