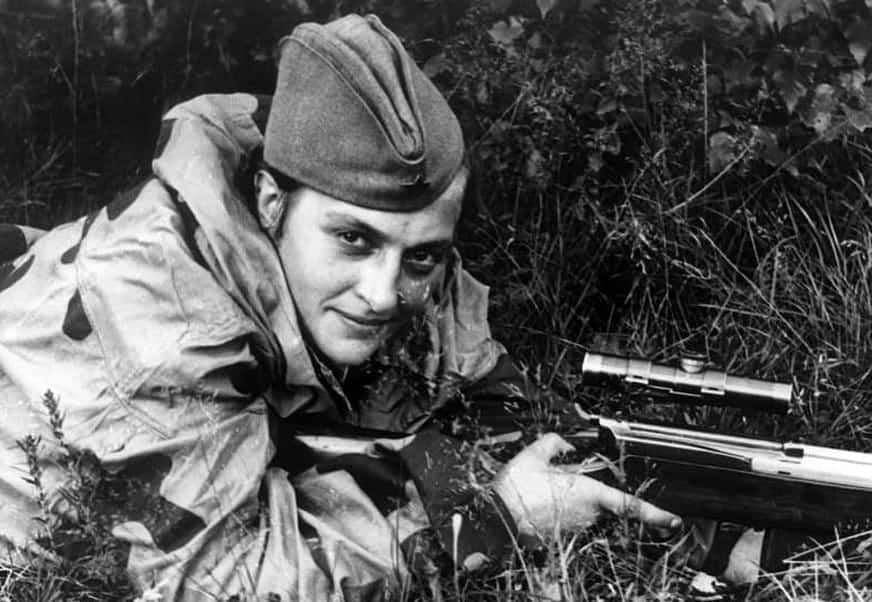 One of the most successful snipers in history is indeed a woman. Liudmyla Mykhailivna Pavlichenko was a Red Army Ukrainian sniper during World War II. She is credited with 309 kills, which makes her one of the top snipers in history. Pavlichenko first developed sharp shooter skills when she moved with her family to Kiev and joined a sharpshooter club at the age of fourteen. In 1937, she earned a masters degree in history.

Pavlichenko was in her fourth year studying history when the war hit in 1941, and Germany invaded Russia. Pavlichenko joined up and requested to be a part of the infantry. “I joined the army when women were not yet accepted, she said.” In fact, she had to prove herself to join after she refused serving as a nurse. They handed her a rifle and pointed her in the direction of several Romanians they knew to be working with the Germans.

She shot them both dead and was accepted to serve as a sniper. Casualties on the front lines were high, out of 2,000 female snipers only 500 survived the war. Pavlichenko made her first official kill with a semi-automatic rifle near Belyayevka.

Private Pavlichenko fought for about two and a half months near Odessa, and it was there that she recorded 187 kills. Her unit was then sent to Sevastopol and she fought for eight more months. She eventually clocked 257 kills of German soldiers. Her total kills during World War II eventually totaled 309, including 36 enemy snipers. Pavlichenko was eventually taken out of service after she was wounded by mortar fire.

She mainly was taken out of commission due to her rising fame and reputation for being such a good sniper. “By that time even the Germans knew of me,” she said. They attempted to bribe her, blaring messages over their radio loudspeakers. “Lyudmila Pavlichenko, come over to us. We will give you plenty of chocolate and make you a German officer.” When bribery didn’t work they threatened to tear her into 309 pieces. Pavlichenko loved that the Germans knew her score.

Pavlichenko then toured the U.S. and Canada and she became the first Soviet citizen to be received by a President. Eleanor Roosevelt sent her on a tour of the U.S. recounting her experiences as a woman in combat. Pavlichenko spoke no English at the time and her mission was to drum up American support for a second front in Europe to take on the Germans.

During her American tour reporters did not cease to ask off-colored questions because Pavlichenko was a woman. They told her she looked fat in her uniform and that in America women tended to wear shorter skirts. They even asked if it was permissible to wear make-up on the battle field, to with Pavlichenko replied: “There is no rule against it,” Pavlichenko said, “but who has time to think of her shiny nose when a battle is going on?” The New York Time even noted: “she wore no lip rouge, or makeup of any kind,” and that “there isn’t much style to her olive-green uniform.” She was nicknamed “Girl Sniper” by many press outlets.

After enough press bashing the famed sniper started speaking up: “I wear my uniform with honor,” she told Time magazine. “It has the Order of Lenin on it. It has been covered with blood in battle. It is plain to see that with American women what is important is whether they wear silk underwear under their uniforms.

What the uniform stands for, they have yet to learn.” She also spoke bluntly about killing Nazis: it brought up no “complicated emotions” in her. “The only feeling I have is the great satisfaction a hunter feels who has killed a beast of prey.” To another reporter she said: “Every German who remains alive will kill women, children and old folks,” she said.”Dead Germans are harmless. Therefore, if I kill a German, I am saving lives.”

Pavlichenko was eventually able to change the conversation as she fought for American support on the front lines. She began to regale the press with both tales of her youth, and on the battle ground. She told of being a stubborn tomboy in her classroom. She spoke of being the daughter of a teacher and factory worker, and of watching her hometown invaded and destroyed. She also always made the case for the capability of women on the battlefield: “When a neighbor’s boy boasted of his exploits at a shooting range,” she told the crowds, “I set out to show that a girl could do as well. So I practiced a lot.”

Pavlichenko’s most oft-quoted plea to get Americans to help out in the war came when she visited Chicago. “Gentlemen,” she said, “I am 25 years old and I have killed 309 fascist occupants by now. Don’t you think, gentlemen, that you have been hiding behind my back for too long?” Her words drew huge applause.

Throughout her post-war tour Pavlichenko remained very vocal about equality for women. She spoke of Soviet women of the time: “our women were on a basis of complete equality long before the war. From the first day of the Revolution full rights were granted the women of Soviet Russia. One of the most important things is that every woman has her own specialty.

That is what actually makes them as independent as men. Soviet women have complete self-respect, because their dignity as human beings is fully recognized. Whatever we do, we are honored not just as women, but as individual personalities, as human beings. That is a very big word. Because we can be fully that, we feel no limitations because of our sex. That is why women have so naturally taken their places beside men in this war.”

After touring the world as a famous sniper, Pavlichenko became a historian like she always wanted. That said, she additionally spent the rest of her days recounting stories being a woman on the front line (and receiving too many gifts of guns and pistols to count.)Pavlichenko also remained great friends with Eleanor Roosevelt and Ms. Roosevelt was even granted a special visit with her during he Cold War. Pavlichenko died on October 10, 1974 at age 58. She was later honored by the Soviets with a commemorative stamp, and she’s recently been the subjected of several much lauded documentaries.