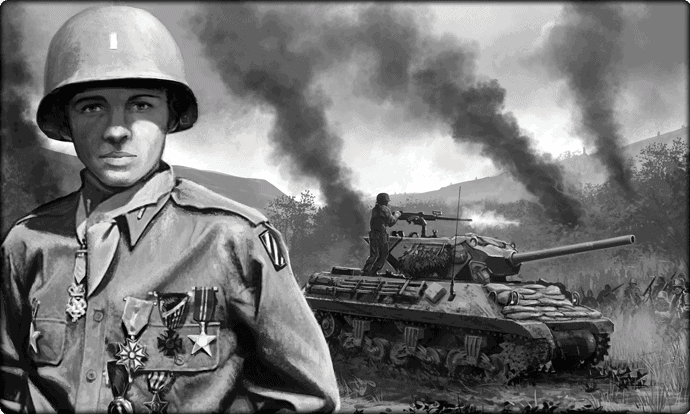 At 19, Audie Leon Murphy held off a company of German soldiers for an entire hour, by himself. He followed the event up by launching a counterattack while wounded and out of ammunition. When he returned to America, he received every combat award the U.S. Army had to offer.

Murphy was born on a farm in Texas. His father was an unstable man and would vanish only to reappear later. Eventually, he entirely abandoned his twelve children. Murphy was the seventh in line and had to quit school at the age of eight to pick cotton and help the family pay their living expenses. By the time he reached his teenage years, his mother had succumbed to endocarditis and pneumonia. Her death haunted him for years to come. After Murphy’s war service, he reflected on his memory of her and noted that since she died, “she took something” that he was always in search of.

To make up for food shortages, Murphy would pack his rifle and hike into the wilderness to hunt for whatever wild animals he could find. Over time, his hunting and rifle skills were top notch, which did not help diminish the disappointment he suffered when his childhood dream of being a soldier were cut short. He was underweight and underage. His sister finally helped him get acceptance for enlisting after forging his birth date so that he met the minimum age requirement.

It was just after the bombing of Pearl Harbor, and a lot of soldiers were signing up which allowed the military to be selective. Despite his fake age, Murphy was still denied acceptance to the Navy and Marines. Left with just the Army as an option, he quickly enlisted. Basic training was held at Fort Wolters, where Murphy was noted for his marksmanship with a rifle and his bayonet abilities. Basic training was followed by infantry training at Fort Meade, and then deployment.

He shipped out in time to participate in the Allied invasion of Sicily as a division runner. During that stint, he killed two Italian officers. In September 1943, Murphy was scouting along the Volturno River in south-central Italy. He and two additional soldiers were ambushed by German machine gun fire. One of the U.S. soldiers was killed. Murphy and his companion retaliated by killing five German troops.

Several scrapes with the enemy ended with Murphy coming out on top. His abilities moved him forward in the line of succession. Less than one year into his service, he was promoted to staff sergeant. His service was not without setbacks. Malaria put him in the hospital during the onset of the Battle of Anzio, after which he was again promoted, this time to platoon sergeant.

As the platoon sergeant, Murphy was assigned to Company B. He and his troops held up in Anzio, Italy for several months during bad weather. While there, the platoon troops shot and killed a German tank crew. Alone, Murphy approached the tank until close enough to activate two grenades, to make sure the crew was dead. When Rome was liberated, the platoon made their way south, spending the month of July there before heading to France, where they immediately fell under attack by the Germans.

The unit had been trying to cross a vineyard when the Germans opened fire. Murphy returned machine gun fire and things seemed to be under his control. After two Nazi troops were killed, two more appeared from inside a farmhouse, giving the impression they had surrendered. Murphy’s best friend began to approach them when they shot him dead. Murphy retaliated by overtaking the house, killing six Nazi soldiers, wounding two more, and taking 11 as prisoners of war.

Altogether, Murphy’s awards are too numerous to list. He earned his medals in a variety of nations during the war. Murphy’s efforts are honored by France, Belgium, and the U.S. With the war’s end, Murphy’s career prospects were plentiful.

It is speculated Murphy’s lack of a formal education did not make up for his intuitive combat skills. He had never been a run of the mill kind of guy and was not a soldier of that ilk. When called to duty, he was given special privileges allowing him to go off base, where he was in parades and gave speeches. He also appeared in Hollywood films.

The dark side of his war talents emerged when Murphy began to suffer post-traumatic stress syndrome. The good looking, well-liked, and widely admired veteran had insomnia and when he did sleep, he had nightmares. He was depressed and slept with a loaded gun. Eventually, he began taking sleeping pills to help to quell his nightmares. Not surprisingly, he became addicted to the pills. To withdraw, he locked himself in a hotel room for a week until the chemical grip they had on his body was eliminated.

But Murphy was not able to control all aspects of his body. His emotions explosive, he was moody and had a temper that was sometimes violent. The complexity of his situation was further compromised when he broke down in tears seeing footage of German children who were made orphans by the war. For Murphy, it would have been easy to empathize with them because he had lost both his parents at a young age.

In reaction to his difficulties, Murphy did with his emotions what he did in combat to his enemies; he met them head on Murphy’s public speeches began to shift from his collection of medals to his collection of psychological problems caused by his time spent fighting in World War II.

He drew public and government attention for the need to extend veteran health care benefits and need to increase studies focusing on the impact of war on soldiers. Murphy was on a plane that crashed into a mountain in Virginia when he died in 1971. He was buried with military honors at Arlington National Cemetery, where his grave continues to be one of the most frequently visited.