Today In History: 1400, King Richard II Starved To Death In The Tower Of London 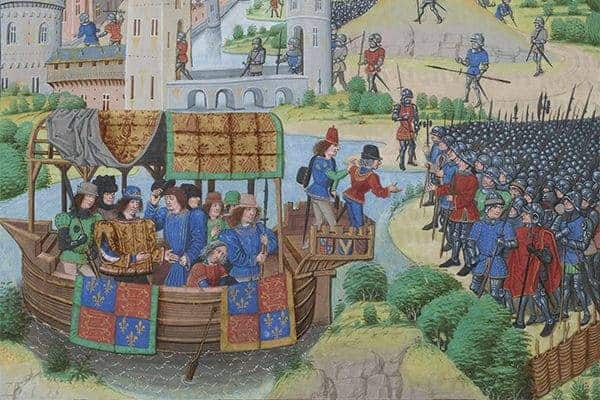 Today In History: 1400, King Richard II Starved To Death In The Tower Of London

In contemporary society, Richard II is most often recounted through Shakespeare’s depiction of him as a vengeful, ruthless, tyrannical ruler. Prior to mental illness destroying his senses, Richard II was a peace seeker whose early ambitions were to forge harmony with his adversaries and those he ruled over. He was a boy king who inherited the throne when the world was marred by plague outbreaks and serf revolts. Little light is shined on the empathetic Richard II, and perhaps too much attention is put on the end of his life, which was overshadowed by mental illness.

Richard II, also known as Richard of Bordeaux, was born in 1367 at Archbishop’s Palace in Bordeaux, which was part of the English territory as an extension of Aquitaine. He inherited the seat as heir to his father’s throne after his older brother’s death. His father’s legacy extended back to the early days during the Hundred Year’s War when he became widely known as The Black Prince. When his father died, Richard was hastily crowned. Because of his young age, there were fears family members would influence the prince, in particular there was concern about his uncle preying on his fortuitous position, which was all the more covetous by the following year.

When he was 10-years-old Richard II’s grandfather died, leaving him next in line to inherit the crown. The delicacy of the situation was obvious. To protect Richard and help him make decisions, a continuously rotating council was put into place. Eventually, he leaned on advisers with whom he felt a genuine friendship. Two in particular were benefiting and gaining control over royal affairs so much that the British Commons made the decision to end Richard’s council entirely.

Adding to the complexity of this scenario, a large tax had been issued to fund military expeditions. The governing class were held in contempt over the taxation by lower class citizens which gave rise to a peasant revolt. It was not only the tax serfs were upset by; the peasants had been struggling with economic ruins which was only one of the ramifications of the Black Plague – there was the issue of the Black Plague itself.

The revolt was serious. Peasants were looting and killing the governing classes. They were making demands, including an end to serfdom. As their discontent worsened, it became an issue Richard could no longer hide from. He had taken shelter in the Tower of London, where he finally met with his councilors who concluded that the royal military did not have the physical manpower to take on the peasant rebellion and win.

They concluded that to negotiate with the peasants was the only viable option. Richard II would have to navigate through the wild crowds and meet with the rebels to discuss their demands. He did, and agreed to their demands. It was assumed the killing and looting would end as a result. When it did not, he again met them. They said they did not believe him. The king, who was only 14-years-old at the time, encouraged the peasant rebellion he would lead them to safety. He continued negotiating and suppressing rebel uprisings throughout England.

By the time Richard II died, his reign was overshadowed by the latter years of his life, during which he suffered mental illness. It is hypothesized that after being taken to the Tower of London, a plan to take the throne back was made known to the King, who consequently wanted Richard II dead if for no other reason than to eliminate the possibility of such an event.