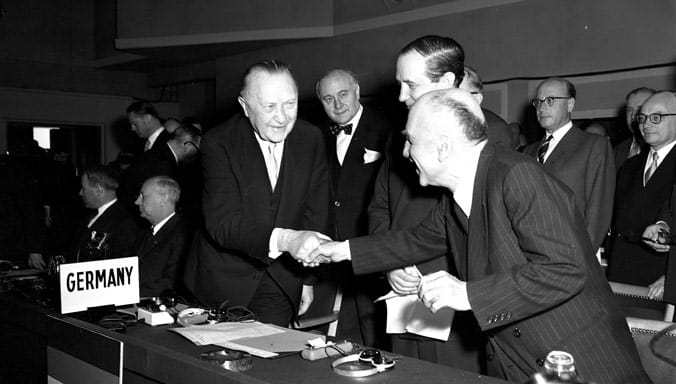 The fall of Nazi Germany caused a vacuum of sorts within Germany itself. Because the Germans had been the cause of not one but two World Wars, no nation who had fought against them trusted them to right their country on their own. The United States, France, and Britain all maintained a military and cultural presence in the country until May 5, 1955. Or at least, they did so in half of the country.

The other side was occupied by Communist Russia. East Germany would be held by the USSR right up to its downfall in the late 1980s and early 1990s. In many ways, the divide of Germany was a microcosm for the next 50 years of tension between the West and the USSR.

Outside of Germany, the tensions between the United States and the USSR brewed for decades, and each side made moves to hold together their sphere of influence. One such move on the part of the Americans would be the creation of NATO. The North Atlantic Treaty Organization was a coalition of countries who pledged to always come to each other’s aid when threatened by an outside force.

More specifically, NATO was an organization that was meant to protect the members of Europe who did not want to fall under the Soviet Russia regime.

Both Russia and the West publicly proclaimed that they wanted to see the reunification of Germany. It was something that both sides spoke about very often. But it was something that was never going to happen while both sides remained entrenched in their ideals of how the country (and the world) should be run. The U.S. and its allies would never capitulate and allow Germany to be completely overcome by Communism. Just like the Soviets would never back down on their quest to spread their ideals throughout the world. It was a stalemate that would only be solved when the Soviets eventually failed.

After the U.S. and its allies removed their military presence from West Germany, the country was truly independent once more. On May 9, 1955, the newly formed Federal Republic of Germany joined NATO. This is unsurprising, of course, as it still had to co-exist with the Soviet held German Democratic Republic (East Germany).

That co-existence was fraught with tensions, and would be for decades. Travel between the two halves of Germany was highly restricted, even going so far as being quite violent at times, and what interaction the two countries had would remain contentious until the fall of the USSR and the removal of the Berlin Wall.

As you might suspect, the USSR did not take NATO’s influence lightly. The country responded with the creation of the Warsaw Pact, which was founded just a few days after West Germany joined NATO. The Warsaw Pact was a group of Soviet satellites that banded together to provide mutual protection, much like NATO. In truth, the Warsaw Pact is often seen as a political maneuver to counteract the influence of NATO.

The Cold War was filled with both sides countering the other’s moves. One side would do something, then the other would respond to it, often in a similar manner. It would remain so until the fall of the USSR in 1991.