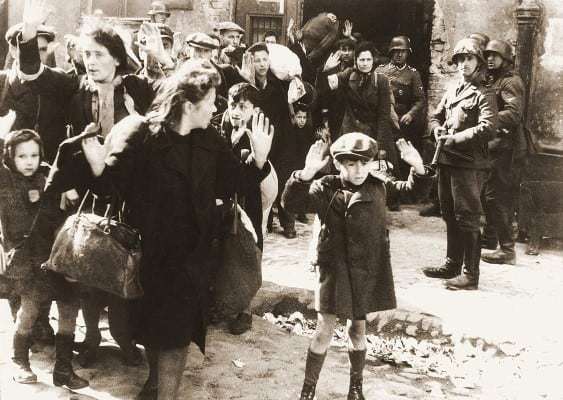 One of the sad facts about the Holocaust is that we have absolutely no clue exactly how many people of Jewish decent actually were killed by the Germans during their purge. Estimates range anywhere from five to six million people killed, but some say it was much higher.

On May 16, 1943, the biggest Jewish uprising of World War II was put down by the Nazis. The Warsaw Ghetto in Poland was created by the Germans in 1940, and was meant to keep those of Jewish decent in one place, to make them more controllable. Over 400,000 Jews were imprisoned in the Ghetto.

The conditions at the Warsaw Ghetto were atrocious. Disease was rampant, as so many people were crowded into a very small space. Food and water were scarce, and shelter was often times non-existent. Thousands died from disease, starvation, and crime. All 400,000 Jews were crammed into just a little over 3 square kilometers, or about 1 square mile.

Between 1940 and 1943, the Germans instituted several deportations, where they would take people from a section of the Ghetto and move them to the Treblinka concentration camp, where they would be killed. Treblinka was the largest and deadliest of the German extermination camps, nearly a million of the Jews killed during the Holocaust were killed there.

This particular uprising started on April 19, 1943 as a result of the refusal of those imprisoned at the Ghetto to followed the orders of police commander SS-Brigadeführer Jürgen Stroop. After the refusal, Stroop then commanded his troops to burn the Ghetto to the ground. Nearly 13,000 Jews were killed and at between 55,000 and 75,000 were deported to the nearest extermination camp.

At first, the Jewish resistance decided not to protest the mass deportations from the Ghetto. Between 1940 and the end of 1942, they believed that the deportations were taking their fellows away to labor camps, and not to the extermination camps as was actually the case. When, at the end of 1942, they discovered that they had been wrong, the fight against the mass deportations began. The uprising that took place beginning in April of 1943 was just one of the first uprisings that would take place between then and the end of the war in 1945.

While the resistance in the Ghetto was marginally successful in delaying the deportations, it ultimately failed. With the poor living conditions, lack of resources, and lack of leadership, it isn’t surprising that the Germans eventually crushed the Warsaw Ghetto uprising of 1943. Stroop’s campaign to burn the Jewish resistance out was successful, and ultimately led to the resumption of the mass deportations.

The Holocaust was one of the most horrific crimes in human history. It is almost too hard to comprehend the depravity of the German Final Solution. 6 million dead people is almost impossible for the human mind to imagine. The Warsaw Ghetto uprising was just one instance among many during the long and tragic war where resilient Jewish citizens decided to fight back against their Nazi oppressors.