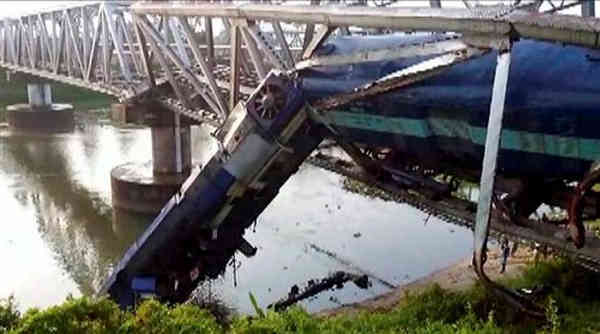 There isn’t a lot that is known about the train tragedy that struck India on June 6, 1981. Records of the disaster are not readily available or incorrect or just plain don’t exist at all.

What is known is that some form of train disaster happened on June 6, 1981, near the town of Samastipur. For some reason, the train derailed and plunged into the river Bagmati. That is the sum total of all the facts we know in terms of when and where.

In terms of casualties, the facts get much more unreliable. The disaster was not well documented, and sources on the internet range anywhere from 500 to 800 depending on where you look (we’ve also seen accounts that the numbers range from 1000 to 3000). The train was carrying an estimated 800 when its journey started, though again, that number isn’t confirmed, as there are also reports that the train was carrying as many as 3500 people. As you can see from the image below, it isn’t apparently unusual for trains in India to have overcrowding problems.

The only confirmed casualty count we have is that 212 bodies were recovered from the Bagmati after the derailment.

Despite the lack of firm information on the aftermath of the disaster, the real mystery comes in when we look towards the cause. The answer to the question of “why did this happen?” is that we don’t know.

There are two prevailing theories based on accounts that were collected after the train derailed. The first, perpetuated by the Rural Development Minister for the region, was the train derailed because of a sudden use of the brakes. Some reports confirmed this was the case. The cause of the breaking is also unknown, but the Minister and several investigators posited that the reason the drive hit the breaks was to avoid hitting a cow (more likely a water buffalo). In Hinduism, cows are sacred, which might explain the driver’s inability to hurt one.

The other theory about the cause of the disaster was that a storm blew the train off the bridge. This is more unlikely than the first given that there are no records of storms strong enough to derail a train in existence, though apparently in some reports it was raining.

There are several other theories that are equally unprovable, like flash flooding, but in the end, it just has to be concluded that we may never know why the train derailed. The internet, it seems, has settled on the idea that the train hit its brakes in an attempt to avoid hitting a cow, causing the train to derail into the river, killing many hundreds on board.

In the end, we know this for sure, this was most likely the worst train disaster in India ever (at least up until that time). 212 people were confirmed dead, but the retrieval of the bodies was interrupted due to Caste differences in the region. The Indian Navy at one point considered using high explosives to surface the bodies in the river, but the plan was never used. This was a terrible tragedy that we know too little about.