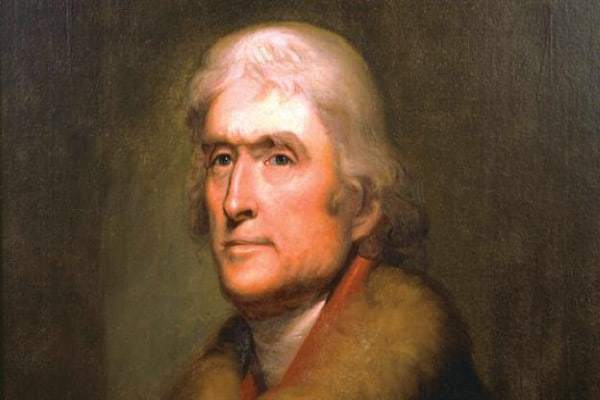 On this day 1743, Thomas Jefferson was born in Shadwell, Virginia. As a President, Jefferson oversaw the largest land purchase ever made by the United States, the Louisiana Purchase, and helped establish American foreign policy for decades after his exit from office.

However, his most well-known accomplishment is the Declaration of Independence. As the principal author of the document, Jefferson had enormous say in the wording and content of the most famous document in United States history. As you might expect from someone who helped found the nation, Jefferson held many posts within newborn United States government. He was the nation’s first Secretary of State, the second Vice President, and the third President.

Thomas Jefferson is also well-known for one his Vice Presidents, who challenged Alexander Hamilton to a duel. Aaron Burr was Jefferson’s first Vice President, but the two men didn’t get along. At the time, the Vice Presidency was determined by a convoluted process through the Electoral College. Because of these difficulties, Burr wasn’t reelected as VP in 1804. It was that year that he decided to challenge Hamilton to their famous duel.

All told, Jefferson is known for his expansion of the new nation with the Louisiana Purchase, the annexation of Florida, the writing of the Declaration of Independence, the creation of the first non-religious university in the U.S. (University of Virginia), and the establishment of the Library of Congress.

One of the most controversial things about Thomas Jefferson is his seeming hypocrisy about the issue of slavery. While his political opposition to the slave trade is well-known and well documented, it seems at odds with the fact that Jefferson himself owned several dozen slaves. It is now broadly accepted that he had a sexual relationship with a slave on his plantation after his wife died in 1782. Most historians agree that the reason why Jefferson didn’t free his slaves had more to do with finances than his own morality. With growing debts, it made it much harder to offset the assets that the slaves represented.

In the end, Jefferson is one of the most fascinating presidents in United States history. He played a huge role in forming United State’s politics and foreign policy, and his writings continue to play a role in scholarship to this very day.