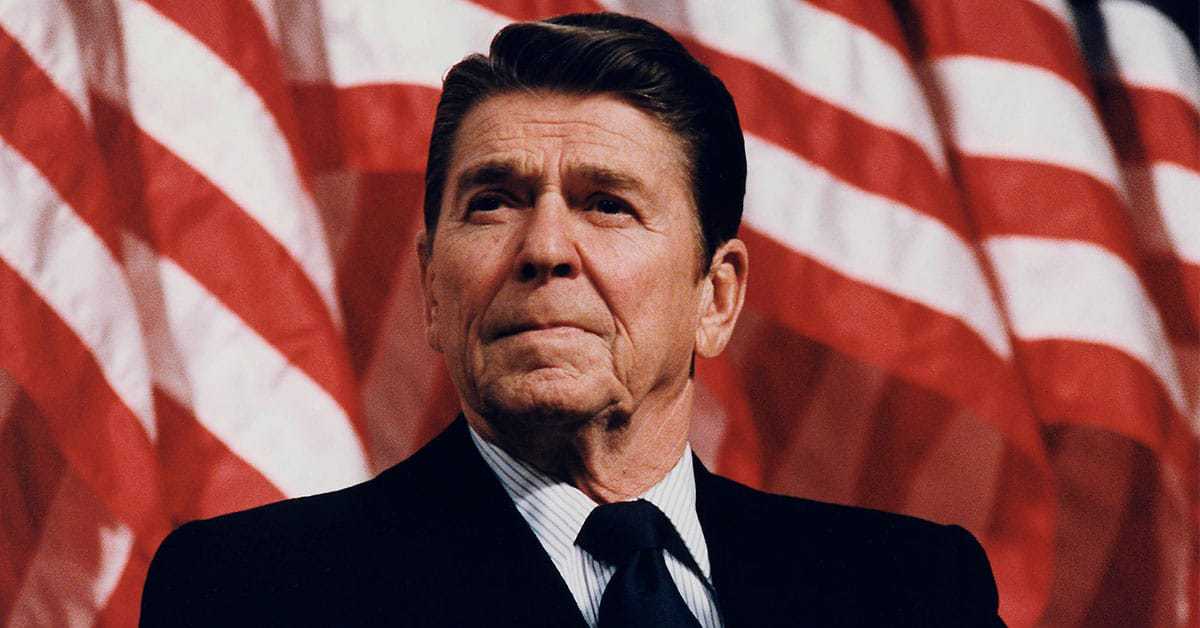 Born on February 6, 1911 to a poor family in Tampico, Illinois, Reagan began his career not as a politician, but a radio host and (though later) an actor.

Reagan’s first film appearance (as a credited cast member) happened in 1937 in the film Love is in the Air. Within the next two years, Ronald Reagan would be casted in 19 films, including several with very famous actors of the time like Humphrey Bogart and Errol Flynn. His favorite film, when asked in later years, was the film Kings Row which was released in 1942.

Reagan’s career continued in the 1940s when he was elected to the Presidency of the Screen Actor’s Guild. During this time, he and his then-wife, Jane Wyman, provided the FBI with lists of actors who they suspected were communists.

His political career started in the 1960s, when he became the spokesman for the Goldwater campaign. Prior to 1962, Reagan professed himself a fairly liberal Democrat. What changed his mind, was the increasing influence of what we now call Social Justice Democrats. With the legislation that would introduce Medicare, Reagan officially moved to the right-wing, calling the entitlement “socialism” and saying that if the legislation was passed it would see the end of “American Freedom”. Of course, Medicare is something that most senior citizens take for granted today.

Reagan’s first time gaining attention in the political arena happened in 1964 while working as a spokesman for Barry Goldwater. In one of his speeches during that campaign he wrote: “The Founding Fathers knew a government can’t control the economy without controlling people. And they knew when a government sets out to do that, it must use force and coercion to achieve its purpose.”

In 1966, Reagan was elected as the Governor of California, a state that has become quite famous for electing former actors to public office. In 1968, he ran for President for the first time, but failed to receive the nomination against Richard Nixon.

Reagan ran for President once again in 1976, but would again lose the race for the GOP nomination (Gerald R. Ford won that particular nomination; Ford lost the 1976 election to Jimmy Carter).

It was in 1980 where Ronald Reagan’s quest for the Presidency would be realized. Jimmy Carter was very unpopular. The election was fought during several domestic and foreign crises, including the Iran Hostage Crisis (1979-81). As a result of Carter’s unpopularity, Reagan won the election by a landslide, carrying 44 states and winning 489 electoral votes.

After a highly successful presidency, Reagan retired and become a philanthropist and a highly regarded public speaker. His most popular speech after his time in office was given at the 1992 Republican National Convention.

During this time period, Reagan began to experience the effects of Alzheimer’s disease. It was announced in 1994 (when Reagan was age 83). In a statement, Reagan wrote: “I have recently been told that I am one of the millions of Americans who will be afflicted with Alzheimer’s Disease … At the moment I feel just fine. I intend to live the remainder of the years God gives me on this earth doing the things I have always done.”

On June 5, 2004, Reagan died from pneumonia (complicated further by Alzheimer’s disease). His passing was felt by many. His coffin was viewed over 100,000 times while it laid in state, and his funeral was attended and watched by millions worldwide.