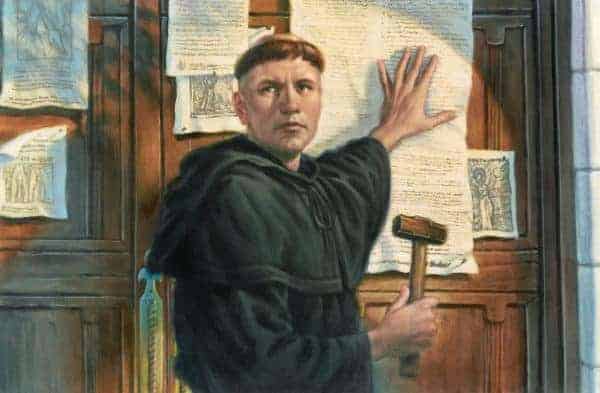 For much of its history, the Roman Catholic Church has been very intolerant of alterations to the Scriptures that are the basis for its faith. Such alterations were prosecuted as heresy, often times violently, for hundreds of years.

During the early 1500s, Martin Luther, a professor of biblical interpretation at a university in Germany, was amongst a few scholars and extreme clerics who opposed the use of “indulgences” by the Catholic Church. The practice of accepting “indulgences” had been going on for hundreds of years, but by the end of the Middle Ages, they had become often corrupt. Indulgences in that form allowed for “forgiveness of sins” for commercial acknowledgement, whereas without such things indulgences were meant to be acceptance and penance on the part of the sinner in return for forgiveness.

Marin Luther was the chief instigator of the Protestant reformation, primarily with the release of his work The Ninety-Five Theses, a pamphlet outlining reforms that he and others would like to see made in the faith and organization of the Church.

On April 18, 1521, Luther was called before the Holy Roman Empire in Worms, Germany, and told to recant his theses or face charges of heresy. The assembly of Church representatives was then called a diet, hence Diet at Worms.

On April 17, the Diet asked Luther if his written works were in fact written by him, and if he was prepared to renounce all of their teachings as heresy. He asked for a day to think about it. When he came back in front of the diet he said “They are all mine, but as for the second question, they are not all of one sort.” In other words, he defied the Diet’s ruling that all of his works were to be classified in the same manner.

The end result was that he did not reject his writings, and would not, unless they could be proven to go against the Scriptures. Before the Diet could conclude that Luther was a heretic, he fled Worms.

The Diet promoted an edict on May 26, 1521 that proclaimed Luther a heretic and warranted anyone who came in contact with him to apprehend him to be punished by the Church. It also allowed for forgiveness for anyone who killed him. The edict also banned all of Luther’s writings, and responded by basically pitting Luther against the entirety of the Holy Roman Empire, headed by Charles V.

Luther would remain in conflict, and under the constant threat of violence, for the rest of his life.