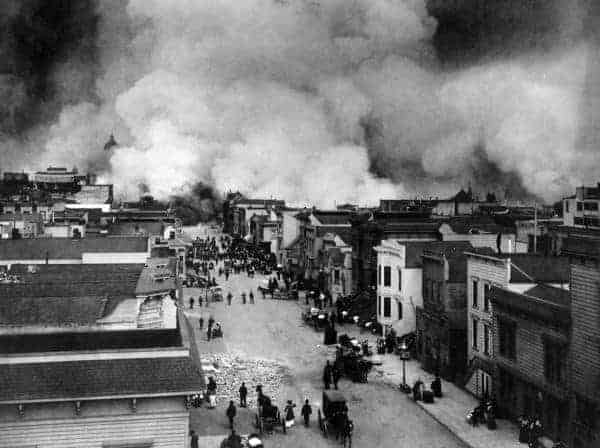 Early in the morning of April 18, 1906, San Francisco was struck by one of the worst natural disasters in the history of the United States. An earthquake hit the city that measured at least 7.8 on the Richter Scale (some reports have it as high as 8.0). The quake started a city-wide fire that took five days to put out. More than 3,000 people were killed between the quake and the fire, and more than 30,000 buildings were destroyed.

The earthquake was triggered by a slip in the San Andreas Fault that measured about 275 miles long. According to historical reports, people felt aftershocks as far away as Oregon.

As this was 1906, the buildings at the time were mostly wooden Victorian structures, which, as history tells us, is a terrible thing to build a city with. Great fires have been a hallmark disaster waiting to happen throughout all of history. Chicago, London, Rome, Moscow, Montreal, Boston, Tokyo and many, many others have all experienced great fires.

In order to fight the fires, the U.S. Army Corps of Engineers, firefighters, and other volunteers used dynamite to destroy entire city blocks in order to create fire walls that they hoped would save parts of the city. San Francisco’s mayor and the Governor of California mobilized U.S. troops to help fight the fire. The mayor also authorized them to shoot on sight anyone they found looting.

When the fires subsided, 3,000 people were dead, nearly 80 percent of the city was in ruins, and more than $400 million in damage was recorded. That comes close to $11 billion in 2015 currency. The earthquake of April 18, 1906, remains the worst natural disaster in California history, and among the worst ever recorded.