Today in History: The Library of Congress is Founded (1800) 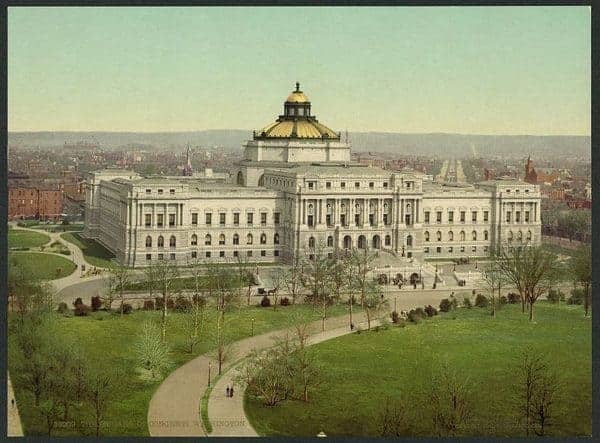 Today in History: The Library of Congress is Founded (1800)

The Library of Congress is one of the largest libraries in the world with over 17 million volumes, hundreds of thousands of maps, audio and video archives, and much more. But every institution has a beginning.

On April 24, 1800, the Library of Congress was officially founded. President John Adams signed legislation that allotted $5,000 to buy “such books that may be necessary for the use of Congress.”

It was the following year before the books started to arrive, and it would take until around 1812 before the library was sporting around 3,000 volumes.

Of course, 1812 is a very important year for America, as it started yet another war between the newly formed country of the US and its previous overlord, the United Kingdom. During the war, the British invaded America once again, and set fire to Washington, D.C. in August 1814.

One of the targets that was completely destroyed was the Library of Congress. All 3,000 volumes were lost in the blaze.

After the war was over in 1815, Thomas Jefferson sold his private library to Congress for around $24,000. The collection was one of the largest in America at the time, containing around 6,000 volumes.

After that, the Library of Congress continued to grow, and just before the American Civil War broke out, the library consisted of nearly 55,000 books.

Unfortunately, yet another fire disrupted that growth. In 1851 more than a third of the library was destroyed, along with most of the Jefferson Collection that was added in 1815.

This marked a dark period for the Library for several reasons. First, the country was on the brink of war, though that wasn’t realized until a decade later. The tensions that started the Civil War were already brewing at the time of the fire in 1851. Second, the Library of Congress itself was unpopular to some in power. Specifically, the librarian of the Smithsonian, Charles Coffin Jewett , and the Librarian of Congress, John Silva Meehan. Both men wanted to restrict the Library of Congress, and the fire in 1851 gave them an opportunity to do that. Jewett wanted the Smithsonian to be the Nation’s library, but that plan was ultimately foiled.

After the fire, Congress allocated money to repurchase the books that had been destroyed, but did not give money to rebuild the building itself. It wasn’t until after the Civil War that focus was put back on rebuilding a proper library building. In 1888, construction began on the Thomas Jefferson building.

That building still houses the Library of Congress to this day. As you can imagine, the library has gotten a lot bigger since they moved into the Thomas Jefferson building in 1894. There have been periods of great expansion for the library, specifically when it took over the Smithsonian’s library in 1866 (it added almost 600,000 volumes from that move alone).