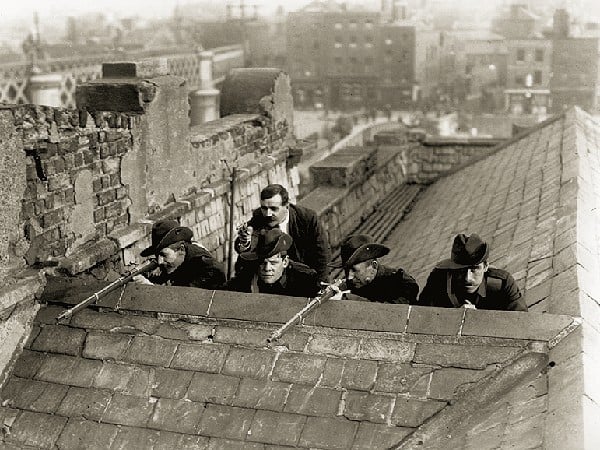 On April 24, 1916, during the peak of World War I, the British had a lot of problems that they were focusing on militarily. They had absolutely no patience for rebellions coming from the home front.

But that’s what they got on this day in history. Ireland had been under British rule for centuries by the time the 20th century rolled around, and many Irishmen were tired of the English’s tyrannical rule. On April 24, 1916, around 300 men and women started what is now known as the Easter Rising or Rebellion. Over the next six days, they would have some initial success.

They captured Liberty Hall, the Post Office, and the Dublin headquarters of the British Government. The British sent thousands of troops in response, along with artillery and a gunboat. They then proceeded to kill people indiscriminately. 485 people died, only 16 percent of which were actual members of the rebellion. Over half were civilians, while the rest were members of the British military. 2,600 people were wounded.

The British surrounded the rebels, opened fire with artillery, and continued firing until the leader of the Eater Rebellion offered an unconditional surrender on April 29. Fighting continued for a couple of days, but only in small pockets.

The aftermath was rather predictable, given the state of the world at the time. The British government couldn’t take the chance that the rebellion would start back up, so they arrested thousands of Irish men and women. 3,500 people were sent to prisons in Britain, some of them to internment camps.

The vast majority of those who were imprisoned had nothing to do with the Easter Rebellion. The leaders of the Rebellion were executed.

All of this fighting was for Irish independence, something that had been fought for a few times before. Another rebellion occurred after the Easter Rising. The Irish War of Independence was fought between 1919-1921 after Irish Republicans were elected to the British Parliament. The representatives didn’t take their seats, but instead declared independence once more, which led to war.

The Easter Rebellion took place in the midst of World War I. The Germans, who would most likely profit the most from the distraction that the Irishmen were providing, attempted to send arms to the rebellion, but were intercepted by the British Navy.

In the end, the Easter Rebellion was unsuccessful when it came to the actual battles, but it did stir up the Irish Independence movement, which was key to the eventual win they gained in the War of Independence five years later.