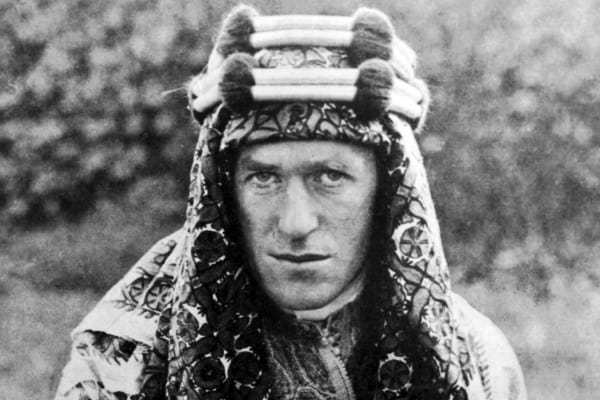 Thomas Edward Lawrence wore many hats. He was an archaeologist, a military officer, a highly respected diplomat, and a writer. In more modern times, his persona has been expressed on the big screen in films like Lawrence of Arabia which debuted in 1962.

In all actuality, T.E. Lawrence might have gone down in history as a highly successful but relatively unknown member of the British military if not for two things. First was the sensationalistic journalism portraying his role in the 1916 Arabian Revolt against the Ottoman empire, specifically by journalist Lowell Thomas.

The second reason he is so well-known is that he wrote a book called the Seven Pillars of Wisdom which was an autobiographical account of his time in Arabia, where he successfully advised the Arabian uprising. His role there was primarily as a strategist and military liaison.

Without getting into the history of the Arabian Revolt too deeply, it all comes down to a group of Arab nationalists uprising against Ottoman rule, with the agreement that the British would help. Prior to the revolt, Lawrence was in military intelligence, where he was instrumental in negotiating the agreement that led to the Arab Revolt.

With his guidance, the Arabians were successfully able to execute a guerrilla war against the Ottomans. In 1917, after capturing Aqaba near Sinai, the Arabians moved with British aid towards Jerusalem. Soon after that, Lawrence was captured by the Ottomans and tortured. After the successful raid and capture of Damascus (in present-day Syria), the fraction of the Arabian army ended the Revolt.

The Seven Pillars of Wisdom was published while Lawrence was serving in the Royal Air Force under an assumed name.

Because of the attention given to his book, and because of journalism by Lowell Thomas in 1919, he was given the title Lawrence of Arabia. It was the photo shows (lecture, dancing and music shows) by Thomas that made Lawrence a household name. Lawrence used these photo shows to tell his story about the war in Arabia.

His later years were spent under the name T.E. Shaw. He spent a couple years in the Royal Tank Corps, but hated it and decided that he wanted to go back to the Air Force. He was re-enlisted in 1925 in the RAF, but was sent to a remote base in British India because of renewed attention to his real name due to the re-release of his book. He was recalled to Britain in 1928 because of rumors floating around that he was involved in espionage.

Lawrence was a keen motorcyclist. He owned several motorcycles, and loved to spend his free time after he was recalled to Britain riding his bikes through the English countryside.

On May 19, 1935, T.E. Thomas (under the name of T.E. Shaw) died in a motorcycle accident. Interesting factoid: it was the study of T.E. Lawrence’s death that led to Hugh Cairns inventing the motorcycle helmet.

His fame is mostly because of the publicity surrounding his actions during the Arabian Revolt. In Military Intelligence, he helped the Arabians successfully revolt against the huge Ottoman Empire, on of the longest lasting empires in the common era.