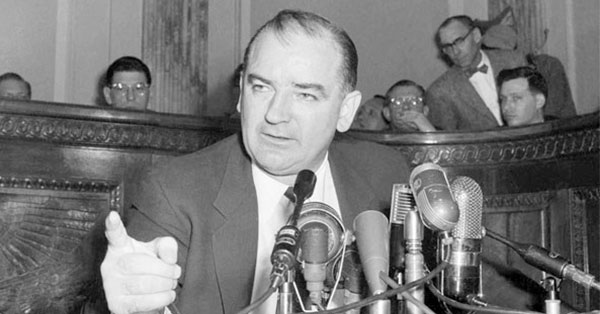 After World War II, the fear of Communism was almost tangible in the United States. The Red Scare was worsened by the fear mongering of Joseph McCarthy, a Senator for the state of Wisconsin. McCarthy was an unremarkable senator that no one that resided outside of the state of Wisconsin had ever heard of before 1950. In February of that year, McCarthy made his name by proclaiming publicly that there were communists working in the State Department.

So started over four years of constant hearings and accusations. Over that time McCarthy would ruin dozens if not hundreds of careers both in and out of the United States government.

For many Americans after World War II, the so-called Red Menace was a very real threat to American values and safety. In 1949, the USSR tested their first atomic weapon. Soon after that, the Communist Party in China won the Chinese Civil War. In 1950, North Korea (a communist country) invaded the South, leading to the beginning of the Korean war.

This led to Americans fearing the almost domino-like spread of Communism. It was why the US Government put so much effort into preventing a small, insignificant country like Vietnam from falling completely to the influence of Communism.

Joe McCarthy exacerbated the Red Scare significantly. In some sources on the internet, there is evidence that some of the people on McCarthy’s list were in fact sympathetic to the communist cause. In major sources, however, the evidence says that McCarthy publicly shamed and ruined dozens of people over the course of four years. Whether he truly did this for honorable reasons or was simply enamoured with the attention he received, we don’t know.

His four years of tyranny were ended in 1954. Specifically, on June 9, 1954 when he was berated by US Army lawyer Joseph N. Welch. McCarthy had spent months prior to that time insinuating and accusing the US Army of harboring hundreds of communists. There is no evidence that it was true, but McCarthy didn’t seem to care.

It was these hearings against the Army that was finally saw McCarthy censured by the US Senate. Welch was questioned by McCarthy over a young lawyer in Welch’s law firm. Welch’s reply was this: “Until this moment, Senator, I think I have never really gauged your cruelty or your recklessness. Fred Fisher is a young man who went to the Harvard Law School and came into my firm and is starting what looks to be a brilliant career with us….Little did I dream you could be so reckless and so cruel as to do an injury to that lad.”

McCarthy then spent the next hour hounding Welch over that young lawyer. The hearing was televised. It was one of the first times that Americans (and the rest of the political establishment) could see what McCarthy really was: a bully.

For sure there were Communists in the US Government after World War II. There were likely spies that were never caught. But it is also true that Joseph McCarthy never found any of those people.