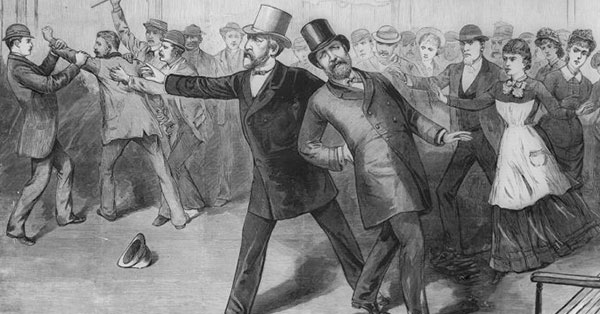 Charles A. Guiteau isn’t a name that most people know. His claim to fame, such as it is, is the assassination of President James A. Garfield in July of 1881. Garfield was just the second US President to ever be assassinated (Abraham Lincoln being the first, less than 20 years before).

Guiteau was insane, or at least it appeared to be so after the investigation. During the 1880 election, Guiteau convinced himself that by writing a speech, and passing out copies of it to his friends and family, he was almost solely responsible for James Garfield’s election (despite the speech having never been given in a public venue and despite it having originally been written for Ulysses S. Grant). Because he believed that, he also believed that he was deserving of a post within the new administration.

Now as far as history knows, James Garfield had no knowledge at all that Guiteau even existed. That is, he didn’t know until March 8, 1881, when Guiteau made his way into the White House and met with the President. Guiteau dropped off the speech he supposedly wrote, then roamed around Washington D.C. for the next two months, mostly staying at rooming houses without paying. During those two months, he also met with several high-ranking government officials to press his claim that he deserved a spot within the State Department due to his speech.

As early as 1875, Guiteau’s family knew that he was most likely insane. They had tried to have him committed to a mental institution (a polite way of saying Insane Asylum in those days), but he escaped.

After meeting the Secretary of State (who rudely, but rightly rebuffed him), Guiteau’s mania turned violent. He bought a gun with borrowed money, then spent the next few weeks learning how to shoot. The gun purchase itself is interesting, in that he wouldn’t have been able to buy the gun he wanted if the store owner hadn’t dropped the price for him. It is also another piece of evidence for him being insane, as he bought a gun that “looked nice” so that when it was displayed in museums, it wouldn’t look bad.

During his time preparing for his “mission,” he wrote several letters admitting that he was going to kill the president. Unfortunately, all of these were ignored by both the US Army (who he asked for protection from the mob he suspected would hunt him after he assassinated Garfield), and the White House itself (which ignored all of the correspondence that Guiteau sent in).

Garfield was meant to begin his vacation on July 2, 1881. On his way through the Sixth Street station, Garfield, his to sons, the Secretary of State, and the Secretary of War, Robert Todd Lincoln (the son of Abraham Lincoln. Interestingly (and sadly), he was also witness to his father’s assassination).

While in the waiting room of the train station, Guiteau approached the President, and shot him twice at point-blank range, once in the shoulder, once in the back. Unsurprisingly, Guiteau did not get away with his crime. He was immediately arrested, put on trial, and sentenced to death. He claimed he wasn’t insane at the trial, but that he “might have been” during the crime itself.

Throughout the entirety of the post-assassination spectacle, Guiteau believed he would eventually be released. One of his reasons why he believed that, was the he expected Chester A. Arthur (who became president after Garfield died in September of 1881) to pardon him. His rationale, was that he was responsible for Arthur getting a pay raise, so of course, Arthur should get him out of jail.