Today in History: Infamous American Spies Are Sentenced to Death (1951) 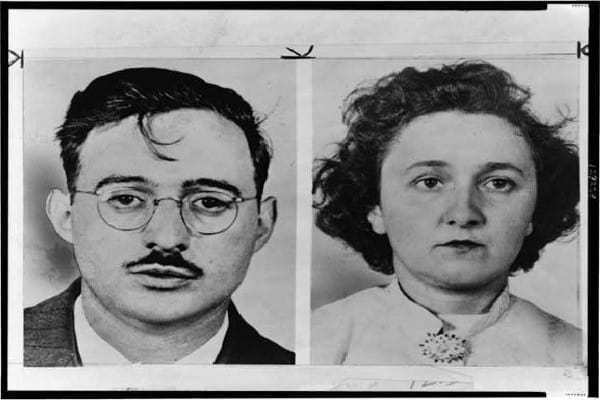 Today in History: Infamous American Spies Are Sentenced to Death (1951)

On April 5, 1951, Julius and Ethel Rosenberg were sentenced to death in New York. The Rosenbergs were instrumental in providing state secrets to the USSR in the last days of World War II and the years after. They were eventually executed by electric chair in 1953.

There is little doubt that Julius and Ethel Rosenberg were both spies in some capacity for the USSR. Or more accurately, they were part of a spy ring that was stole classified information regarding the United State’s creation of the Atomic Bomb.

In 1991, once the USSR fell, declassified information came out that proved that both Rosenbergs played some role in getting the information from Klaus Fuchs (who originally stole the data) and to the USSR.

The question has always remained, did the couple deserve the death penalty? At the time of the trial, the U.S. was in a panic about the spread of Communism. The lawyers for Julius and Ethel Rosenberg argued that the Rosenbergs were persecuted because of the Communist hysteria sweeping the country.

There is some evidence of that, the most obvious being that the rest of the so-called spy ring went to prison for between 9 and 15 years. None of the others were sentenced to death. Even the man (Fuchs) who stole the information and passed it along only served a term in prison.

There is a lot of support amongst historians supporting the guilty verdict for both Julius and Ethel Rosenberg. However, there is also quite a bit of consensus that the couple did not deserve the death penalty due to what might have been an negatively influenced judicial system.

Whether or not those arguments are worthwhile or not, both Julius and Ethel Rosenberg were sentenced to death for their role in providing the USSR with information that would lead to their that nation creating its own nuclear arsenal.