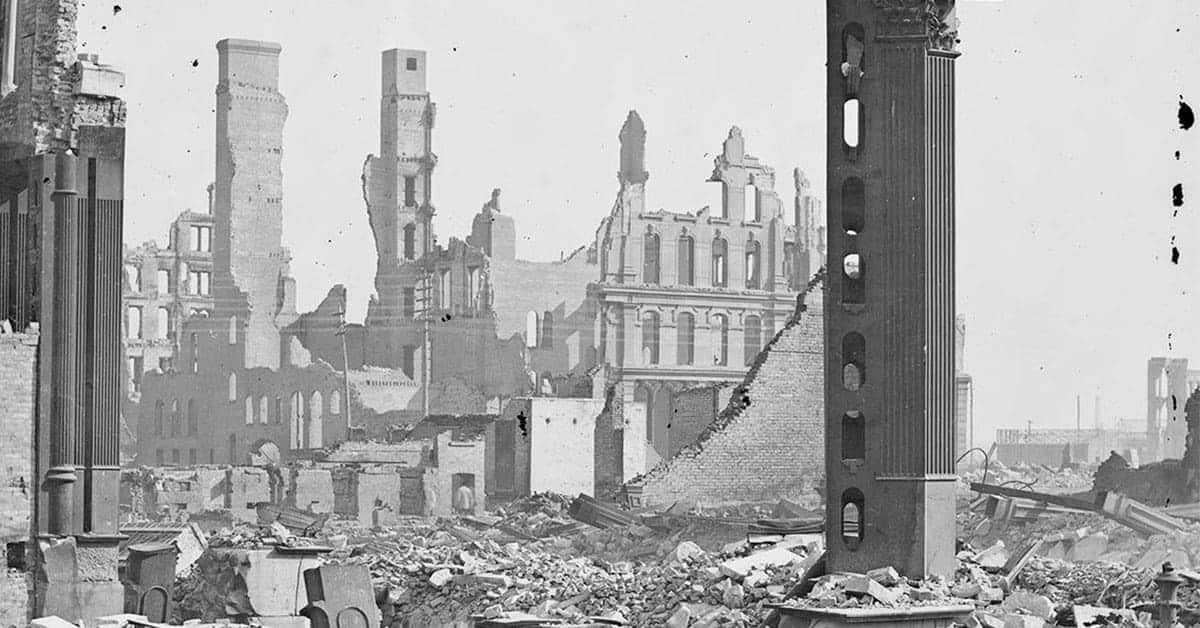 The Great Chicago Fire of 1871 Remains Shrouded in Mystery

There are some great myths in American history, but ask anyone in Chicago and they’ll tell you that they don’t come any bigger than that of Mrs. O’Leary’s cow and the Great Chicago Fire. It has gone down in local lore, alive in the history of Chicago for so long that people have ceased to care whether or not the legend has any basis in fact. The story itself is simple – that the fire was started by a cow that knocked over an oil lamp or a lantern, thus starting the fire – but the context, the consequences and the circumstances of the conflagration have added layers of intrigue to the tale in the near 150 years that have passed since that seminal moment in the history of the United States.

Like any great investigation, we should start with the scene of the crime. The fire certainly did start at the O’Leary residence, a small wooden house on DeKoven Street, now estimated to be at the corner of Roosevelt Road and Canal Street in the Near West Side, just over the canal and the train tracks from the Loop.

The fire initially took hold in the barn that housed the O’Leary family’s animals – which held plenty of fuel for the flames in hay, straw and the timber framing of the structure – and was easily blamed on the livestock. Reports also suggest that an illicit gambling den may have been housed in the barn, with one of the patrons the culprit, but as befitting such a huge fire, all the evidence went up in smoke.

Whatever it was that started the fire, the spread of it was rapid. Within minutes the whole surrounding area was aflame, the inferno fuelled by wooden houses, topped with roofs made from shingle and tar that transported the fire from dwelling to dwelling in the densely-populated Near West Side. The fire took place in October, at the end of a bone dry summer in which Chicago had barely seen a drop of rain: the whole city was a tinder box waiting to go up.

Indeed, the drought that afflicted Chicago would have terrible consequences on the whole Midwest, as nearby communities also suffered conflagrations of their own. Peshtigo, a logging town just over the state line in Wisconsin, endured the deadliest fire in US history on the same day as the Great Chicago Fire while across Lake Michigan, the towns of Manistee and Holland were also reduced to cinders.

The atmospheric conditions caused the fire to spread swiftly. A breeze blew the flames northeast, directly towards the Downtown area. The confusion lead to the fire department, well-trained and practised in fighting barn fires, to the wrong address. By the time they arrived at O’Leary’s, the flames were beyond their control. They hoped that the Chicago River would form an unbreachable barrier, but the excess of loose wood that was held in the lumber yards along the river’s edge gave so much fuel that the flames spanned the water and caught on the other side, abetted by an ever-strengthening wind.

With the fire taking hold in the heart of Chicago, the panic was total. The mayor ordered all the prisoners in the courthouse to be released for their own safety when the building caught fire and when it eventually collapsed, the sound of the bell in the bell tower falling was heard for miles around.

The meteorological conditions that characterize major fires began to take hold. With enough wind and enough fuel, fires create their own ecosystems as hot air is forced up and dislodges colder air, causing a fire whirl. This threw flaming debris in every angle, spreading the fire further through the city and over the river for a second time. The waterworks caught on fire and collapsed, removing the one store of water that may have been able to save Chicago.

The fire would range all the way through the 8th and into the 9th, stopping only in the evening when rain mercifully fell. When the city cooled sufficiently for investigators to enter – a process that took several days – the damage could be surveyed. A 4 mile long, ¾ mile wide swath had been cut through the centre of the city, destroying everything in its wake. Over 100 people lay dead and another 100,000 were homeless, while a full third of the business capacity of Chicago had gone up in smoke.

The reconstruction was swift. Donations were sent from all over America to aid in the housing of the homeless and a rebuilding of the city, while firefighters from Milwaukee and all over Illinois arrived to help douse the flames. Almost as swift were the rumours that began to circulate about the source of the fire, with Mrs. O’Leary and her livestock at the centre of them. The Chicago Tribune mentioned the cow in their first edition to be published after the fire and it was all over the city before the flames had even cooled. The O’Learys could not have been a more perfect target for the prevailing political mores of the time.

There had been for a long time a concerted campaign in all of America’s major cities against the poor, Irish Catholic migrants who made up a large portion of the underclass. Their faces did not fit for a variety of reasons: their Catholicism was at odds with the Protestantism of the American ruling classes, their accents (or lack of English proficiency) and lifestyles seen as uncouth and their potential political power feared by the powers that were in Chicago.

Anti-Irish and anti-Catholic groups – think Daniel Day-Lewis’ character in Gangs of New York – had made ground in most major cities, capitalizing on the fear that many Americans had for the thousands upon thousands of Irish immigrants that had arrived in the United States after the Great Famine of the 1840s in Ireland. Earlier in 1871 in New York, some 63 Irish Catholics had been killed in sectarian rioting in New York City. Certainly a fire that originated in a predominantly Irish area and in the house of Irish immigrants was convenient to many in the Chicago establishment.

Mrs O’Leary’s cow was not, however, the only rumoured culprit. The man who had initially reported the fire, another Irish immigrant named Daniel “Pegleg” Sullivan was also suspected of having started the conflagration while attempting to steal from the O’Learys. Furthermore, the O’Learys were known to host a gambling den on their premises and one of the gamblers later claimed in his will to have started the fire, fleeing from Mrs O’Leary when she chased him and some friends away, having caught them playing craps with her son. Even wilder, an 1882 article suggest that a meteorite may have been responsible – a comet was sighted over the Midwest on October 8 and there were several other fires that day, though meteors rarely retain enough heat to ignite on landing.

The theory regarding Mrs O’Leary’s cow was later admitted to have been fabricated by a journalist in 1893, though by then it had passed into folklore and was widely accepted by the public. The wider perception was such that the city of Chicago was forced to officially exonerate the O’Leary family – though no charges had ever been made and no evidence ever presented against them – in 1997. The Fire has long since passed into the annals of history and the true cause will in all likelihood never be known.

What is indisputable is the effects of the Great Fire on the modern day city of Chicago. With almost the entire downtown destroyed and the previous method of construction – balloon framed, timber built houses – not totally discredited, the city was forced to completely rethink its urban design and infrastructure.

Fortunately – as fortunate as a city can be when its entire central business district has been destroyed – the bulk of the economic activity in Chicago was not focussed on the modern day Loop area, but instead on the huge stockyards and railway intersections that were to be found on the South Side. Chicago had built its economy on meat packing and transportation infrastructure, the vast majority of which survived the fire, and thus the economic effect was mollified. Thus the draw to the city still existed, the financial backing was still there and the city was able to fund a rebuild that would turn Chicago into one of the great cities of the world.

Well aware of the problems of timber-framed buildings, Chicago decided to use brick and steel to create the new city centre. The first skyscraper was constructed in 1885 and today the city is marked by some of the most impressive examples of late 19th century and early 20th century architecture to be found anywhere in the world. It might not have been all down to Mrs O’Leary and her cow, but the Great Chicago Fire is the dividing point between the old Chicago and the new, modern metropolis on the banks of Lake Michigan that exists today.