Today in History: The Founder of Lamborghini is Born (1916) 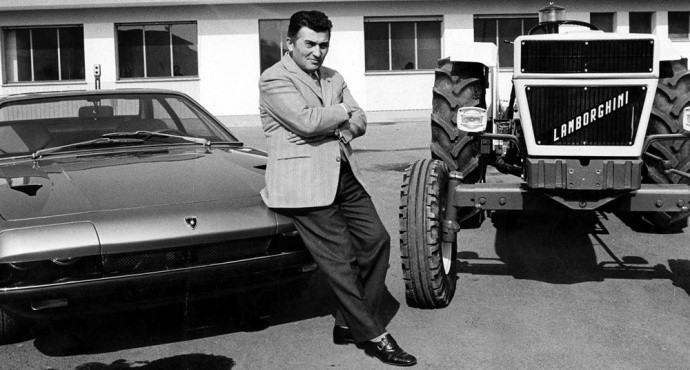 Today in History: The Founder of Lamborghini is Born (1916)

When Ferruccio Lamborghini first started making motorized vehicles in 1948, he didn’t set out to make uber-expensive sports cars. Instead, he made tractors. When people think about Lamborghini, they think fast, sleek and colorful, not agricultural equipment or air conditioners, but both are actually the industries that Lamborghini got his start in.

What is even more surprising is that even though they are now best known for making those cars, there are other companies still make other products (like tractors and air conditioning units) with the Lamborghini name and logo. In fact the Lamborghini name is still very popular in both agricultural equipment (especially in Europe) and air conditioners.

On April 28, 1916, Ferruccio Lamborghini was born to grape farmers in Italy. Throughout his life, he specialized in making industrial investments, and placing his name on them. His companies flourished and expanded throughout the post-World War II boom, making Lamborghini a popular brand world-wide.

In 1963, Lamborghini decided to enter the sports car industry, and the Lamborghini 350 GTV was born. Throughout its history, Automobili Lamborghini has produced some of the most expensive, fastest, and highest tech cars ever made.

By the 1970s, the Lamborghini brand started to encounter troubles. Larger companies who could produce at higher scale and lower prices, along with strife in Latin America and Africa, where Lamborghini tractors were very popular, caused the company to suffer financial difficulties.

Furruccio Lamborghini sold most of his company stock and retired to his vineyard in the mid-1970s. Lamborghini died in February 1993.

Today the brand is still used, but is primarily not held by the Lamborghini family. While his son has a fashion line under the Lamborghini brand, the things the world is most familiar with are owned by other, larger companies. Despite that, Lamborghini remains one of the world’s most famous luxury brands.