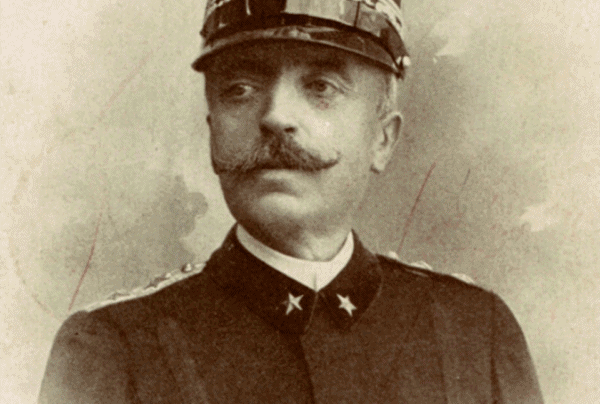 When history is filled with military leaders who inspire awe, the only word that can describe Italian General Luigi Cadarna is inept, and there are many reasons for this. The primary reason, however, is that while in World War I, he didn’t win a single major battle.

Luigi Cadorna was appointed the Chief of Staff of the Italian Army in 1914. He was also at times the Marshal of Italy and a Major General. At the beginning of World War I, he was in charge of almost 900,000 men. By the time he was replaced, nearly two thirds of them were either dead or had surrendered to the Germans.

In fact, his record was so horrid, that he is considered by many historians as one of the worst generals ever to lead an army. That is distinction that no one wants to have.

It is quite difficult to determine what his greatest failure is. Cadorna led four different attacks on the same target (the Fortress of Gorizia), and all four times he failed. Moreover, during those attacks he lost almost 300,000 men.

Most of these battles took place in the Mountains of the Alps, and as Hannibal found out in 218 BCE, the Alps are terrible places for troops. Between terrible terrain, miserable conditions, and poor supply routes, the Alps offer no quarter to a standing or moving army. A lot of the troops that Cadorna had during these initial offensives were eliminated not by an enemy, but by the conditions of the Alps themselves.

In 1917, the Germans and the Austro-Hungarians attacked at Kobarid, and within just two weeks had completely destroyed the Italian Army. In the end, 275,000 troops would surrender to the enemy, severely restricting the already hamstrung Italian Army. It was only after this failure that Cadorna was replaced at the insistence of the Allies.

The March to Death

Luigi Cadorna was a really bad general. But that isn’t what really makes him despicable. Instead, his most horrifying trait is that he killed at least 1,000 of his own men (according to historical records) for no reason at all.

Historians debate whether or not Cadorna practiced something called decimation or “Every Tenth Man.” This is a system the Romans supposedly used where in units that were ineffective, one man out of every ten would be pulled out and executed.

Whether or not Cadorna did that in that manner is unclear. However, we do know that he was a very strict disciplinarian. At least six percent of his troops faced disciplinary action. Almost two thirds were found guilty. According to historical sources, nearly 1,000 men were killed in this manner alone.

Some sources put that number much higher. For example, some say that nearly 350,000 men were accused of criminal activity while under the command of Luigi Cadorna. How many of them were killed we don’t know, but for sure some of them were.

Other claims have gone against the idea that Cadorna practiced decimation. Instead, he supposedly just found those men who were “stragglers” and killed them instead, having no reason to go by a system like the Romans did.

In fairness, the ineptitude of the Italian Army during the first years of World War I are not completely Cadorna’s fault. The army was ill equipped (older guns, and only around 120 artillery units), and because Italy has a history of being a fractured state, there were many language barriers that his troops had to overcome. This made communication difficult at best.

Was Luigi Cadorna simply a bad military man, or was there something else going on? In truth, Cadorna had no military experience whatsoever. He was, instead, a member of a military family. As is the case throughout a lot of early Italian history, powerful families tended to get the good jobs. In Cadorna’s case, it seems that he was placed in power simply because he had family members who had successful military careers.

In the end, Italian allies had enough of Cadorna’s ineptitude, and demanded his replacement. Italy caved very quickly and put a more successful General in his place.

History will always remember Luigi Cadorna as a man who may very well have led more of his men to death than any other general in modern military history. His constant failure in battle cost hundreds of thousands of men their lives. His obscene disrespect for his own soldiers is also legendary, and will cause his name go down in infamy.