Today in History: First Blood is Spilled in the Civil War (1861) 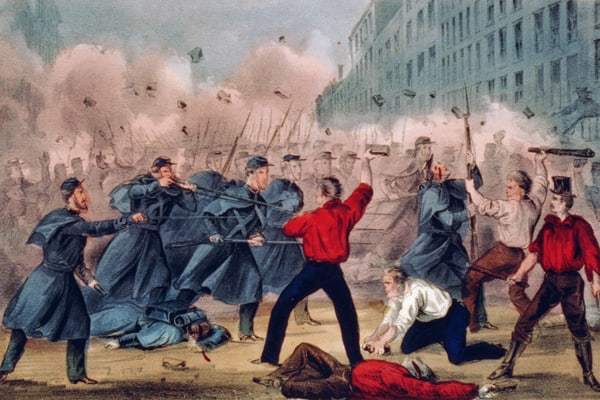 Today in History: First Blood is Spilled in the Civil War (1861)

On April 12, 1861, the American Civil War officially began when the newly formed Confederacy attacked Fort Sumter, South Carolina. Union troops surrendered the fort early the next day, as it was poorly supplied and only had a small fighting force. There were no reported casualties due to the attack. There was, however, an accidental death on April 14 when a store of gun powder exploded.

The first real blood of the American Civil War was spilled on this day in 1861 when a mob in Baltimore attacked troops of the Massachusetts army. Four of the soldiers died in the attack while 12 of the rioters were killed.

The United States government was not prepared for the war that broke out that April. Up until that time, the government believed that the Southern states could continue to be placated until a solution was found. Because of this, the Federal army was a disparate collection of groups from the Northern States, and most were not anywhere near ready for the fight that was to come.

This would lead to President Lincoln to call for volunteers for to put down, as he called it then “the Southern insurrection”. The troops that were attacked that day in 1861 were on their way to answer that call to arms. There was a lot of secessionist support in Maryland, a slave state, so when the Massachusetts troops arrived, the mob attacked, leading to the first real casualties of the Civil War.

The mob blocked routes for the trains and carriages that were carrying the troops north, forcing the regiment to carry on on foot. They threw bricks and stones, which caused the rather predictable response of the soldiers responding with gun fire. The troops were able to make to the train station and out of Baltimore, but not before four of them died from their injuries.

Over the course of the next few months, Lincoln would bolster the Union army with more than 500,000 troops ready to fight in the emerging theaters of the Civil War. Once the North was organized, they were able to bring together more manpower than the South, and they used their economic advantages to eventually win the war. It would be four long years before the end, however, and more than 600,000 men would die before all was said and done.