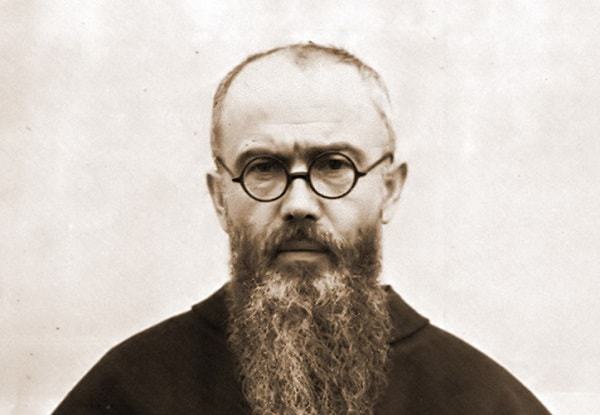 Maximilian Maria Kolbe was a Polish Franciscan friar born in 1894. In 1941 He was sent to Auschwitz concentration camp for Anti-Nazi activities. Here, Kolbe showed tremendous courage and faith in the face of adversity, the culmination of which was to take the place of a complete stranger who was sentenced to die.

Kolbe’s sacrifice led to him being declared a Catholic saint. Yet he is also contentious figure to some groups, with many Jews considering him to be anti-Semitic. Is this attitude justified? And what motivated Kolbe to make such a sacrifice?

Maximilian Kolbe was born on January 8, 1894, the second son of a weaver and a midwife. In 1906, Kolbe had a vision of the Virgin Mary. The vision told Kolbe he could persevere in purity- or become a martyr. Kolbe later said he accepted both.

The vision also convinced Kolbe of his vocation and a lifelong devotion to the Virgin. In 1907, he and his elder brother Francis joined the Franciscan order. In 1914, Kolbe was fully ordained as a priest. In 1915, he earned a doctorate in philosophy from the Pontifical Gregorian University in Rome.

Soon afterward graduating, Kolbe organized the Militia Immaculata, an organization which worked on the conversion of sinners and enemies of the Catholic Church- such as freemasons.

In 1927, Kolbe founded a new Franciscan monastery at Niepokalanow, near Warsaw. The friary became a religious publishing center, printing 11 periodicals, and a daily newspaper. After a period of years on missions in Japan and India, Kolbe returned to Niepokalanow in 1936 and in 1938 started up radio Niepokalanow.

After the German invasion, most of the friars left Niepokalanow. But Kolbe stayed on, opening the monastery as a hospital. Polish refugees began to rush to it for sanctuary.

The invading Germans initially arrested Kolbe. As he had German ancestry, they tried to get him to sign the Deutsche Volksliste, which would have granted him the same rights of German citizens. Kolbe refused. Never the less, he was released and he returned to the monastery where he and the remaining friars continued to nurse their patients- and provide shelter for 2000 Jews they managed to hide from the Nazis.

But humanitarian aid was not all the friars dedicated themselves to. The monastery was given permission to continue printing its religious works. But it also began to publish anti-Nazi propaganda. And so, on the 17th of February 1941, Niepokalanow monastery was seized and shut down by the German authorities. Kolbe and four other friars were arrested by the Gestapo and taken to the Pawiak Prison.

On May 28, 1941, Kolbe was transported to Auschwitz where he became prisoner #16670. Here, he was forced to carry the heavy blocks that would be used to build the crematorium.

But Kolbe was determined to continue his work as a priest. He would share his meager rations with the other prisoners or else ensure others got them first. Each evening, he would visit the bunks of his fellow prisoners, offering them consolation and counsel.

His humanity earned him the hatred of some of the guards, who would bully and beat him in an attempt to break him. One SS guard, known as “Bloody Krott” particularly hated the priest. On one occasion, he gave Kolbe the heaviest load to carry and ordered him to run. Kolbe collapsed under the weight and the officer laid into him, kicking him in the face and stomach and giving him 50 lashes. Kolbe was left for dead in the mud. The other prisoners who smuggled him into the prison hospital saved him.

At the end of July 1941, three prisoners managed to escape from the camp. As was the custom, ten of the remaining prisoners were selected to starve to death as an example to the others. Once the names were announced, one of the men, Franciszek Gajowniczek began to cry out in anguish about the fate of his wife and children without him. Kolbe calmly stood forward. ‘I am a Catholic priest, ” he said. ” Let me take his place. I am old. He has a wife and children.’

The man he saved could only thank him with his eyes as Kolbe was led away with the rest of the condemned to the camp’s starvation bunker. Here, they were thrown into a single cell and left without food and water. Bruno Borgoweic, one of the few Poles who served in the bunker later described their death. Some men drank their own urine or licked the walls so dreadful was their thirst. But Kolbe remained calm and comforted them, holding prayers and meditations.

Every time the cell was checked, Kolbe was found to be standing or kneeling while the other men lay down. He was tranquil and even smiled at his guards. At the end of two weeks, only four men, including Kolbe was still alive. Kolbe was literally the last man standing while the others lay lifeless. But the guard’s could no longer wait for the inevitable to happen. Wanting the cell clear, they injected the survivors with Carbolic acid.

When his turn came, Kolbe did not resist. He simply raised his arm for the injection. The expression on his face after death was said to be ecstatic. He was cremated in the building he helped construct on August 15, 1941; the feast day of the assumption of Mary.

Pope john Paul II canonized Kolbe on October 10, 1982. He is now the patron saint of drug addicts, political prisoners, journalists and the pro-life movement. Survivors of the camps certainly regard him as such. One survivor, Jerzy Bielecki declared that Kolbe’s death was: ‘a shock filled with hope, bringing new life and strength … It was like a powerful shaft of light in the darkness of the camp.’

But while Kolbe is a Christian martyr by some, others believe he shouldn’t be counted as such -because he did not die to preserve the faith, simply to save a life. And the content of some of the publications of his monastery and his involvement in the Militia Immaculata have led to accusations of anti-Semitism- despite the numerous testimonials to the contrary from the 2000 Polish Jews whose lives he helped to save.

And what of Franciszek Gajowniczek, the man Maximilian Kolbe died to save? Gajowniczek survived the camps and lived to the ripe old age of 95. After Auschwitz, he made his way back to his hometown where he found his wife alive- but his two sons dead. But he never forgot Father Kolbe or ceased to be grateful for the sacrifice he made.