Today in History: The 'Domino Theory' Comes Under Fire by the CIA (1964) 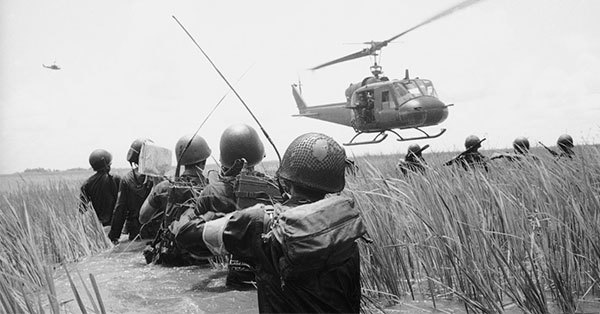 Today in History: The ‘Domino Theory’ Comes Under Fire by the CIA (1964)

The Vietnam was a devastating war for America. Over the course of 20 years, the United States fought to keep the small country of Vietnam from falling to the influence of Communism. It ultimately failed.

The question that historians have asked for the last fifty years or so since the end of the war is: was the US right to spend so much effort on a war for so little gain? This was a question that was really beginning to be asked towards the middle of the 1960s The war officially started in 1955, but between 1955 and 1965, the United States deemed the use of Military Advisors to be the proper course of action.

It wasn’t until 1965 that the United States truly became part of the Vietnam war. The goal of the US’s involvement in Vietnam was to push back against Soviet influence in Asia. It was said by many that if Vietnam fell, the entirety of Asia would fall to Communism. This was the Domino Theory.

The Domino theory was first posited in the US by Dwight D. Eisenhower in 1954 in a news conference: “Finally, you have broader considerations that might follow what you would call the “falling domino” principle. You have a row of dominoes set up, you knock over the first one, and what will happen to the last one is the certainty that it will go over very quickly. So you could have a beginning of a disintegration that would have the most profound influences.”

It was seen by many in the US Government that if Vietnam fell, any influence the US had in Asia would go with it. This is the reason why so much effort was put into the Vietnam war, despite the US having no real, tangible, reason to fight.

The thing is, the Domino Theory was determined to be unrealistic by the CIA on June 9, 1964. In 1964, President Lyndon Johnson asked the CIA to answer the question: “Would the rest of Southeast Asia necessarily fall if Laos and South Vietnam came under North Vietnamese control?” In a memo, the CIA answered that only Cambodia would fall to Communism if Vietnam fell.

The memo continued, “Furthermore, a continuation of the spread of communism in the area would not be inexorable, and any spread which did occur would take time-time in which the total situation might change in any number of ways unfavorable to the communist cause.”

Despite the CIA’s debunking of the Domino Theory, the US committed 500,000 troops the war in 1965. In the end, what the US feared to happen the most, happened anyways: South Vietnam fell. And the CIA was proven right as well. Communism didn’t spread to Japan and Australia.

So the question of “Was Vietnam worth it?” has to be no. In the end, all that was accomplished was a decade or more of strife at home where protests and political upheaval became the norm. Americans were thoroughly fed up with the Vietnam war, and weren’t at all shy about saying so.

Then there are the casualties that must be considered. Almost 59,000 men and women died in that war, and over 300,000 were wounded. It was a devastating war that was fought for political reasons, all based on a theory that, in the end, was worth no more than the paper it was printed on.