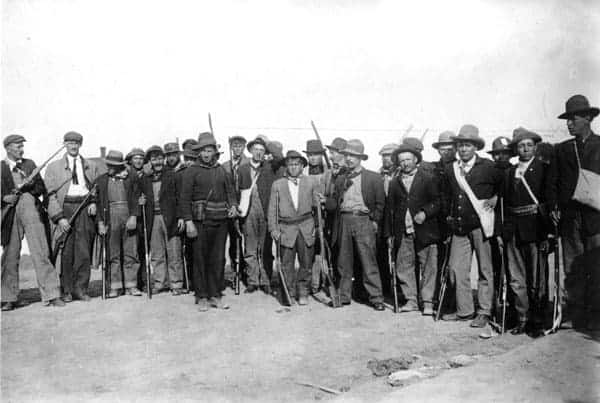 On April 20, 1914, Colorado National Guard members and members of a corporate security firm slaughtered many striking employees and their families near a mine in Ludlow, Colorado.

The strike had been going on for almost seven months, and the attack in April was not the first time that the strikers had been violently accosted. The strikers were employees of Colorado Fuel & Iron (CF&I), owned by the Rockefeller family. They went on strike to protest low pay and hazardous working conditions.

Like many such operations in that day and age, the employees lived on company land and shopped at company stores. When the strike started, CF&I evicted their striking employees out of their homes. The strikers then took up tent dwellings with the help of the United Mine Workers, a union that specialized in helping miners.

The evictions did not accomplish what the company wanted, namely getting the workers back to work. They then hired private detectives to attack several of the tent colonies with rifles and machine guns. During that attack several people were killed on both sides of the conflict.

Once the Rockefellers realized that the strikers would fight back, they contacted the Colorado Governor, who mobilized the National Guard. The Rockefellers agreed to pay for the use of the state troops.

This turned out to be very cruel, even outside of what happened next. The miners thought at first that the government had sent the militia to protect them from the violent attacks of the company. Instead the two companies of guardsmen attacked the largest tent city, which contained about 1,000 people, women and children included. They had no warning. Many families were still sleeping when the National Guard fired into their tents.

It didn’t take long for the miners to fight back, as they too had guns. The fight lasted several hours, but as you might expect, the Guard was much better armed and trained for battle.

The women and children were sheltered in trenches, but weren’t as safe as they should have been. Many perished. By the time the strike was put down, almost 70 of the miners were killed along with their families.

This was not an isolated event, despite the outrage that many Americans felt at the time. More often than not, when employees of these corporate towns decided to strike, they were put down very violently, often at the hands of government actors. It wasn’t until the 1930s that unionization became legal, and the violent suppression of such acts was outlawed.